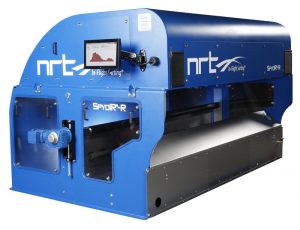 An optical sorter platform from National Recovery Technologies (NRT) is shaped such that “bounce backs” of ejected materials have virtually been eliminated.

That’s one of the features of the new platform, which works with the company’s SpydIR and ColorPlus optical sorters. The platform incorporates NRT’s proprietary In-Flight Sorting technology, which scans plastics after they’ve come off the belt, rather than before they’ve reached the end of it.

“For our customers, a couple of percentage points in recovery can significantly impact their bottom line,” Matthias Erdmannsdoerfer, NRT president, stated in a press release. “The new units offer a sleek, modern design, but more importantly, the new shape provides advanced trajectory control that virtually eliminates ‘bounce backs’ of any ejected objects.”

The shape is particularly good at improving the recovery of fiber and film.

The equipment also comes with an entirely self-contained electrical system and a new software package, which includes an intuitive interface and powerful analytics.

“The new generation is smarter and makes the internet of things a reality for optical sorting,” Erdmannsdoerfer stated.