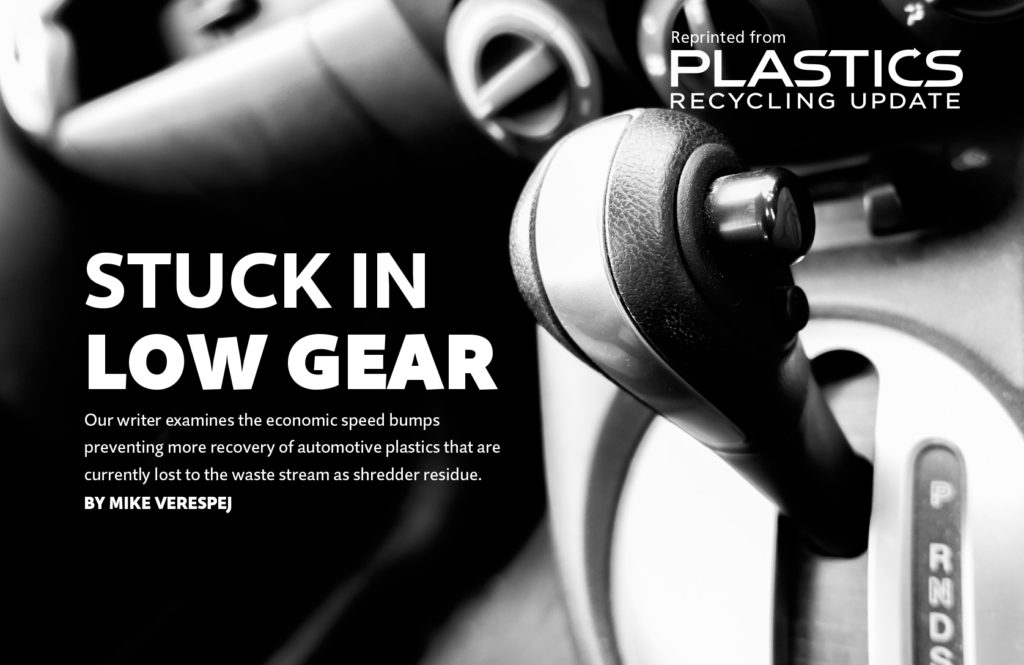 There are roughly 300 pounds of plastics used in each car and truck on the road today, but very little of that material ends up in the recycling stream.

“The biggest problem is that it still is too labor-intensive to pull many of the plastics components off,” said David Wagger, director of environmental management for the Institute of Scrap Recycling Industries (ISRI). “I’m just not aware of that happening to any great extent.”

As a result, most of the plastics in the 15 million vehicles taken off the road each year in the U.S. wind up as part of automotive shredder residue (ASR) destined for landfills. In short, the current economics of auto plastics recycling don’t add up. Except for large, easily identifiable parts such as instrument panels, battery cases and bumpers, the cost to isolate plastic materials found in vehicles is typically greater than possible revenues. And even the bumpers that are recycled are mostly parts with blemishes and defects that have never made it onto the open road in the first place.

“Automotive recycling is alive and well, but the pre-industrial and pre-consumer stage is where it’s at,” said Adrian Merrington, senior associate scientist at the Michigan Molecular Institute and technical lead at Midland Compounding and Consulting, both located in Midland, Mich.

The challenge at the post-consumer stage “is the whole question of ease of disassembly,” Merrington added. “Would you spend five minutes to pull out a small plastic screw? And, even if you do, are you going to get enough to fill up a truck? If not, you can’t justify the cost, and that’s why everything just gets crushed together and ends up as ASR.”

Some experts say the free market alone will not push stakeholders to recover this difficult-to-access material. “You would need to invest in new technology and separation equipment, and where is the business case to do that?” asked Susan Kozora, engineering manager in the Materials Engineering Department of International Automotive Components (IAC) in Southfield, Mich. “It’s very labor-intensive, and there is no legislation to push [for] it.”

Can the huge tonnages of plastics in ASR actually be isolated and recycled into new products? Buckle up and come for a ride through a plastics recycling market that seemingly holds loads of opportunity – and is marked by obstacles.

According to some individuals in the recycling industry, recovering plastics from ASR represents the next potential revenue stream for companies that dismantle automobiles, separate the metals and create the ASR that now goes to landfill.

In April 2013, the U.S. Environmental Protection Agency cleared what had been a regulatory roadblock that prevented the recycling of more of the plastics in ASR by permitting its reuse in new products. But the expected investment in additional optical sorting equipment by auto shredder firms has yet to materialize because of a variety of economic factors.

“It’s still early in the game,” explained ISRI’s Wagger. “Because oil prices have dropped so precipitously in the last year, it’s just poor timing. Virgin plastic prices are cheap compared to a year ago, so the market is a drag on doing it right now.”

That’s also how Mike Biddle sees the current situation. Biddle is CEO of Material Solutions, Inc. in Walnut Creek, Calif. as well as the founder and director of MBA Polymers in the U.K. “Every major automotive shredder company in the U.S. is interested in recycling the plastics that are in ASR,” said Biddle. “But the economics is still a stumbling block in the U.S. It comes down to how much value you can get for the plastics you recover from the waste stream versus what it costs you to get rid of it. … Shredder companies are not flush with cash, so they are holding back on their investments.” 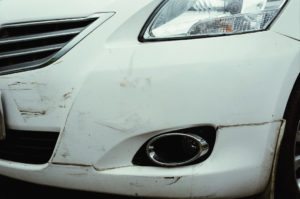 Scratching the surface: Currently, only a small percentage of the plastics from end-of-life automobiles are recovered for recycling.

However, oil prices are not expected to stay depressed forever, so demand for recovered material could see a stark rebound. At the same time, the auto industry is itself seeing a materials shift.

“The ratio of plastics to metals in cars is going up and that plastic is inherently more valuable – on par with the aluminum that’s recovered,” Biddle said.

Already there’s a lot of plastic in end-of-life automobiles. An estimated 10 billion pounds of ASR is landfilled each year by the approximately 300 auto shredder companies operating in the U.S. with roughly 3.5 billion pounds of that being plastic, according to ISRI. The rest is glass, rubber, wood, foam, tramp metal, wire, fibers, sand and dirt.

“There is a lot of untapped plastics waste out there in ASR,” said Biddle. “It’s only a matter of time until it becomes economically feasible to recycle it.”

Yet numerous challenges lie ahead. First and foremost is the issue of effective sortation.

“The single biggest problem preventing greater recycling of the plastics in automobiles is the collection and then separation of the various types of plastics used,” said Bo Rhudy, vice president of plastics fabricator Cambo, Inc., in Commerce Township, Mich. He added that high labor costs add to the complication. “That’s why, for the most part, you only see bumpers and battery cases being recycled.” 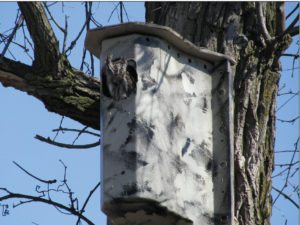 General Motors reuses scrap from its Chevrolet Volt battery covers for screech-owl nesting boxes at various Wildlife Habitat Council-certified sites, like this one in Michigan.

A research paper published last October in the journal Materials outlined many of the obstacles to recycling plastics from vehicles. The study, produced by a team of researchers at the University of Windsor in Ontario, pointed out that many of the plastics and composites in automotive applications are heterogeneous and, therefore, difficult to separate for recycling, and that thermoset materials used on vehicles “cannot be melted down and recycled due to their permanent cross-link structure.”

In addition, the current infrastructure is set up for metals recovery. This is hardly surprising. Automotive recycling starts with a dismantler that removes components that have high market value. The rest of the vehicle is then sent to a shredding operation, with the steel and ferrous metals separated out by magnets and the non-ferrous metals recovered next. The remaining material, the ASR, has a plastics content of 15 to 45 percent, with a typical plastics range of 30 to 40 percent, according to research done by ISRI.

“To further segregate and recycle the plastic materials, a change in infrastructure will be required,” the study in Materials noted. “It is just not economical to improve or develop infrastructure for new technologies if no future revenue is expected to be generated. … Based on current markets and economics, any dismantling operation [beyond] what currently takes place will likely require a subsidy to compensate for the economic loss that would be incurred.”

But even with all those challenges, companies and organizations are working to find solutions. Two years ago, the U.S. Department of Energy, the Argonne National Laboratory, the Plastics Division of the American Chemistry Council and the Vehicle Recycling Partnership of the U.S. Council of Automotive Research joined forces on a five-year, cost-shared research and development project that will focus on the development and demonstration of technologies to recover and recycle automotive materials within the existing recycling infrastructure.

“Together as a team, we can lead the development of viable solutions to the vehicle recycling challenges of today and the future,” said Harvey Drucker, associate laboratory director for Argonne Laboratories.

Individual auto companies also have initiatives in place to help increase the recycling of plastics from end-of-life vehicles. Ford Motor Co. has a research project underway that’s looking at how to recycle the urethane foam used in seat cushions and other applications such as headrests, armrests, roof liners, dashboards and instrument panels.

“We need to find a way to recover them at the right cost, as they are often glued into place,” said Debbie Mielewski, senior technical leader for plastics and sustainable materials at the Ford Research and Innovation Center. “Technically, I believe you could do it within three to five years and that you can easily put 10 to 20 percent recycled urethane foam back into those products.”

Ford is also looking into the “commonization” of materials – using the same parts across multiple vehicle lines – and at how to get rid of adhesives in manufacturing.

Kozora of IAC also thinks that looking at the materials used for parts could have a positive impact on recycling. “To achieve a better solution, companies have to think about design for recyclability upfront,” she said. “Right now, we have way too many materials in a vehicle. If we can move to more commonization of materials, and more across-the-board designs, it would increase the ability to recycle plastics from vehicles at the end-of-life, because the more the recycler has to do to reprocess it, the higher the cost it becomes to recycle.”

General Motors Corp., meanwhile, is working to factor recyclability into its design plans for new vehicles. “Design is a big deal,” said John Bradburn, director of waste reduction efforts at GM. “We want to design for the environment with specifications that increase the opportunities for recycling. We look at high-end opportunities on the recycling side so we can drive that concept backwards into the design phase and develop parts that can be more readily recycled.

“That is the missing element in our society,” Bradburn continued. “We all need to find out what materials communities are generating that others can use and, conversely, find out what materials those companies need that we can generate. … It’s all about connecting the green dots to drive things forward so materials can be harvested for reuse by other local businesses.”

And sometimes you just have to think creatively. For example, GM is building nest boxes for various birds and bats from the glass fiber-reinforced thermoplastic housings of the electric batteries used in the Chevrolet Volt. “What most people would look at as waste, we don’t,” Bradburn noted.

Nests for wildlife shows unique thinking that will be needed on a large scale to recover the significant amounts of plastics currently headed into the waste stream as ASR. The coming years will show whether the recycling and auto industries can move the process off back roads and onto the superhighway of materials diversion.

“At the end of the day,” said ISRI’s Wagger, “the question is whether there is a market willing to buy the material at a price over and above your cost to recover it.”

Note: A version of this article originally appeared in the September 2015 issue of Plastics Engineering magazine (www.plasticsengineering.org).