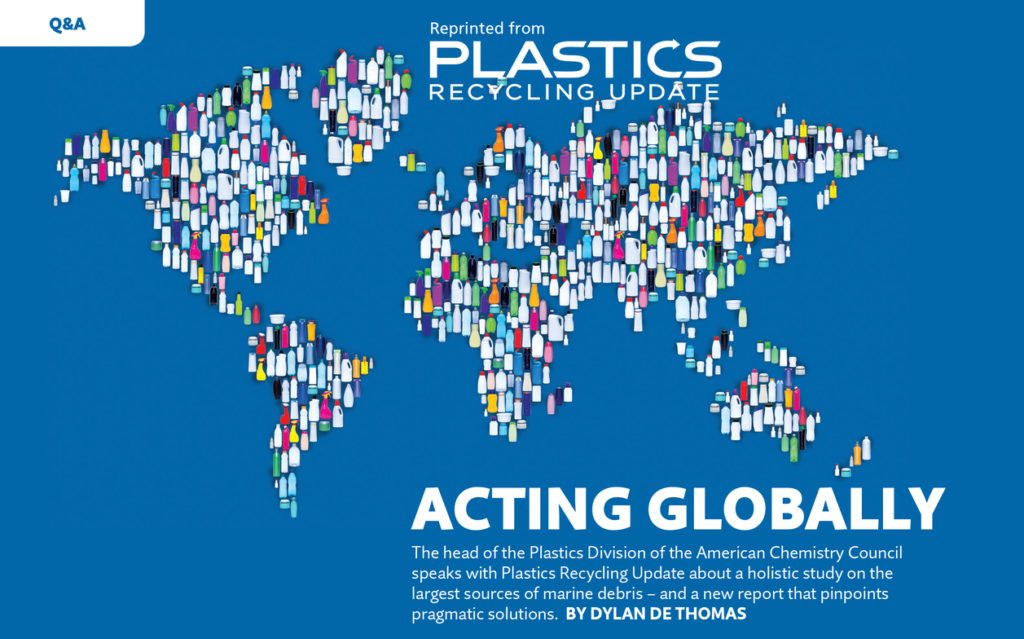 Early last year, a study published in the journal Science estimated that between 5.3 million and 14 million tons of plastic generated by coastal populations worldwide became marine debris in 2010. At the end of September 2015, a report was released highlighting further findings of that study and identified “the cornerstones of a concerted program for global action to solve the plastic waste crisis.”

In developing the study, “Stemming the Tide: Land-based Strategies for a Plastic-Free Ocean,” the Ocean Conservancy worked with the McKinsey Center for Business & Environment, supported by members of the Trash Free Seas Alliance, including the Coca-Cola Company, the Dow Chemical Company, the American Chemistry Council (ACC), World Wildlife Fund, and the Recycling and Economic Development Initiative of South Africa (REDISA).

Five countries were found to be leaking over half of the materials into the ocean – China, Indonesia, the Philippines, Vietnam and Thailand. The report identified various strategies that the authors say could create a 65 percent reduction of plastics pollution from the five countries identified, which would mean a “45 percent reduction of plastics flowing into the ocean globally.”

These strategies include closing “leakage” points within the collection system. An example of this effort would be working to stem illegal dumping, in part by optimizing transport and closing or improving landfills near waterways. Such steps would target 26 percent of the waste identified in the report. Other solutions include boosting recycling – as well as incorporating energy recovery and conversion technologies such as gasification and plastics-to-fuel.

Steve Russell, the vice president of the ACC’s Plastics Division, spoke with Plastics Recycling Update about the report and gave details on his group’s efforts to keep plastic waste out of the world’s oceans.

Plastics Recycling Update: This is a very far-reaching report – in reading it, one thing that surprised me was that the five countries identified as producing half of the world’s ocean debris were not in the Western Hemisphere.

Steve Russell: The modeling showed that plastics are most likely to get into the ocean where there are large populations near the coast with access to consumer goods and relatively little access to any kind of waste management to manage those goods.

Perhaps it’s not surprising that these are economies that are growing very, very quickly and happen, at the moment, to be in primarily Southeast Asia. But it’s possible and probably likely that other countries will evolve into similar circumstances, such as Brazil and India and parts of Africa.

How can stakeholders get through the inevitable cultural barriers that will exist between groups, countries and residents in different parts of the world?

We are learning lessons about how to make smart, efficient interventions that capture plastics for recycling and energy recovery in a way that is both economically sustainable and culturally sensitive. So, that is going to require us to really understand local conditions, local drivers, customs and, most importantly, how to incorporate the informal sector that may already be involved in gathering and recycling some kinds of plastics.

Can you speak about some of your efforts in that area?

For example, the waste-to-worth model that is being piloted in the Philippines involves the informal sector and employing them inside the air-conditioned facilities where the processing and separating takes place. And it gives them boots, gives them gloves and lets the pickers keep what they can take. So the model doesn’t disrupt their income supply. It just puts them in a position to do it more safely and have more access to more material more quickly.

No two places are going to be exactly alike, but the thinking is that in places like the Philippines – where there is some collection but not a lot – the waste pickers are likely to go and pick out the best parts of what comes through a collection system. And then they get to keep that. It’s not only likely that their wages will go up, but they’ll be able to do their work in a safe environment.

Backing up a bit, what were the one or two key takeaways for you when you first read the results of the underlying study?

I think for us, the study reinforced how incredibly important, in emerging economies for which the systems don’t yet exist, it is to first get some sort of collection or aggregation in place. That’s number one. And number two is how to do it better.

We just got back from a forum in the Philippines that had mayors from throughout the [Asia-Pacific] region. There’s a really interesting message that they sent back. They said: “We know how to get roads built. We know how to find teachers. We know how to do things that need doing. But we don’t know how to manage waste.” And so at least in that region, because there isn’t a depth of experience in how to do it, there’s a real interest in and hunger for information on how to make a system work.

This is why we’re encouraged. That particular region happens, fortunately, to be a region where we can perhaps do the most good, the most quickly. There are very willing partners to do it with us.

When it comes to partners, how are you looking to do outreach in that region? Are there similar industry stakeholders in that region that you are working with?

For the last several years, ACC has been working to develop a network of trade associations around the world, focused recently on building awareness of the marine debris issue and interest in doing something about it. We now have 60 different associations from more than 30 countries working with us on that. We have activated that network with a focus on the associations in the Asia region. And at the same time we started working with our own government and with governments from the Asia-Pacific Economic Cooperation Forum, or APEC. We have met with them several times over the last year to discuss not only what we see as an issue of shared responsibility of better waste management but also that we have stakeholders that know something about how to approach those issues and that we would be willing to partner with them to do some pilot programs. The goal is to see if we could really get a stronger region-wide focus on waste management. And at the meeting in the Philippines we had a couple cities volunteer to be part of the pilot project.

So this is the launch of a really interesting body of work that seems to have a wide range of public and private sector stakeholders, who not knowing what the next step is going to look like, agree to work together on it.

When looking at the report, one thing that jumped out was the $5 billion price tag. Could you talk a little bit about how to gather those kind of resources?

We should remember that’s a cost, not a net, and it doesn’t include the economic benefits of a cleaner, healthier environment. The goal of this is to generate systems that, once established and in operation, will be cost-neutral or even produce profit. What we need to do is set up systems that have local buy-in, meaning some degree of local financing and local commitment to make it work. Because we’ve all seen systems where somebody gives a grant and the grant goes away, the money gets squandered and nothing gets done differently. What we really need is shared ownership and buy-in.

Could you discuss how this initiative looks at plastics-to-fuel and energy recovery and what impacts that could have on the North American market?

The programs and models being proposed all start with optimizing collection and recycling first. But, following that, energy recovery is a step before landfilling. The specific mix of programs ultimately put in place is going to depend entirely on the situation on the ground.

Another pertinent issue is scale, and the higher investment traditional combustion would entail – there aren’t many places that are going to be able to afford that kind of investment. China might be the exception to that.

The decision on whether plastics-to-fuel makes sense is going to be entirely locally dependent, based on the waste stream, what it looks like, what other fuels that were produced using it would compete with in the local markets. It’s much more a matter of economics than it is the technology.

When it comes to the marine debris issue on a global scale, what’s most important for our North American readers to understand?

One key point is that while marine debris is a real problem, it’s a problem we can do something about, starting with better waste management on land. We know how to do that, so it’s a matter of making it a priority. And for companies that have developed recycling technologies or systems, or even products that use recycled content, there will be new markets as developing regions with large consumer populations begin to invest in recycling and recovery systems.