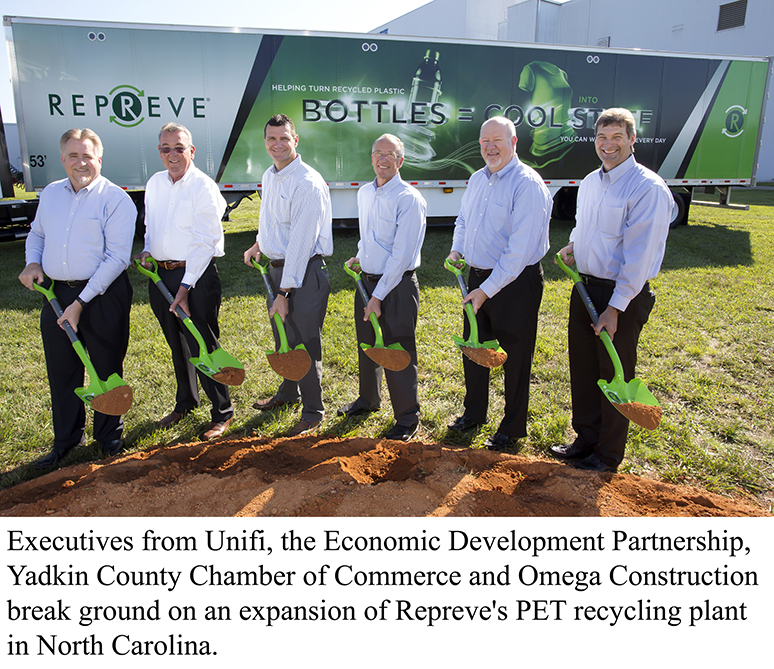 Textiles-from-plastics brand Repreve has announced a $10 million expansion of its existing PET bottle recycling plant to help meet increasing demand around the globe.

The company’s 50,000-square-foot recycling center in Yadkinville, N.C. will more than double in size as a result of the investment. According to a press release from Repreve’s publicly traded parent company, Unifi, the site will expand to 135,000 square feet and be able to process 132 million pounds of recycled PET per year, up from its current annual processing capacity of 72 million pounds.

“We are seeing the brands that we are working with use more and more Repreve,” Roger Berrier, Unifi president, said in a release. “This has created an opportunity for us to keep growing.”

Repreve fabric is in use by a number of major companies, including Patagonia, Ford and Adidas. The Yadkinville site has been in operation since 2011.

As for ensuring Repreve has enough feedstock to power its enhanced capabilities, Berrier told Plastic Recycling Update the company has “completed our analysis of investing in the backward integration into plastic bottle processing to feed our Repreve business.”

“We are currently finalizing all the contract negotiations,” Berrier said.

Eddie Ingle, vice president of supply chain and procurement at Unifi, said Repreve may soon be looking into resins beyond PET.

“We are planning in the future to expand beyond the traditional PET waste streams, as well as other polymers, which would of course supply our yarn spinning operations,” Ingle said.

The expansion is expected to be completed by the spring of 2016.