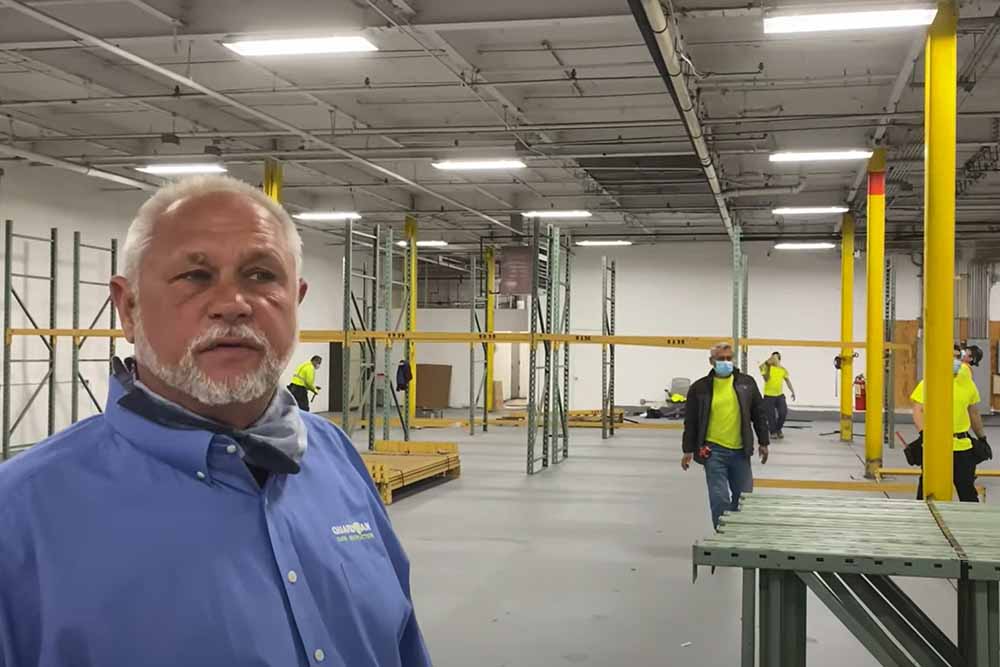 Guardian Data Destruction recently moved its headquarters in South Hackensack, N.J. to a 45,000-square-foot facility a block away from its former site. The new building has triple the warehouse space of their old one, giving the company room to grow and increase its data destruction capacity.

Guardian works as a subcontractor in the ITAD sector, managing data destruction before sending devices to processors for remarketing or recycling. In an interview, Glenn Laga, president and CEO of the company, described how Guardian has carved out a niche in the data security world.

Laga also offered insights on how corporations are placing greater and greater priority on data security, and he detailed how the COVID-19 pandemic is forcing adjustments in data destruction processes.

Guardian launched 15 years ago as a logistics company, picking up and moving computers for businesses. During the course of performing that service, one of the company’s customers asked Guardian to provide data destruction service before moving the computers off-site.

Guardian engineered a mobile data destruction operation that would visit customer locations and wipe devices. The company began erasing data from about 300 computers at a time in a truck, then packing and shipping them to an ITAD firm for asset recovery.

“I realized, at that point, we have a whole new business market to conquer,” Laga said.

The company grew from providing erasure to now performing on-site shredding, erasure, degaussing, and more. The array of services is critical because of the range of customer requirements.

The company currently handles between 50,000 and 60,000 assets per month, and it serves customers across the country. It handles a wide array of jobs. For instance, Guardian provided data destruction on 70,000 hard drives in Arizona late last year and shredded 500,000 reel-to-reel tapes in Texas, among other diverse jobs.

“Five or 10 years ago, more people were concerned about capturing value out of the equipment. Now they’re risk averse, looking to destroy the data and avoid the risk versus getting a return on a used hard drive.”
– Glenn Laga, president and CEO, Guardian Data Destruction

On-site data destruction is an increasingly frequent requirement in ITAD contracts, especially with large corporations. “They don’t want to have that risk of the hard drive being shipped with live data on it,” he said. “The chain-of-custody risk is eliminated completely by having the data destruction done on-site.”

On-site data destruction carries a cost, but it can still be more cost effective than paying for a data breach, Laga pointed out. Plus, for some companies, data security is prioritized above all else.

“Five or 10 years ago, more people were concerned about capturing value out of the equipment,” Laga said. “Now they’re risk averse, looking to destroy the data and avoid the risk versus getting a return on a used hard drive.”

That shift marks a key trend for ITAD stakeholders.

“We’re seeing the value of the equipment in the industry dropping, because there’s less and less precious metals [in devices],” Laga explained. “But the value of the data is drastically increasing.”

COVID-19 and the future

Laga noted his company is complementary to the ITAD sector and that Guardian has no plans to move into asset recovery, remarketing or recycling. It’s performing a service that many ITAD firms simply don’t offer but are required to provide in some contracts.

“When you connect the car to your cell phone, it downloads all that data,” Laga explained. As cars become ever more connected with Bluetooth and mobile devices, vehicles reaching end of life or being returned after a leasing period may have substantial private data stored on them and will require secure data management.

As for the pandemic disruptions, Guardian – like many other companies – is figuring out ways to perform its services when many offices are closed. Guardian works with large banks, many of which have announced they’re not bringing employees back on-site until next year.

In the meantime, the ITAD sector has been adjusting to figure out how it can provide recovery services when employees are working at home. Guardian is able to host its data erasure software in cloud storage, allowing an employee working remotely to download the software and execute the erasure.

Guardian gets a verification when the erasure process is complete, and the company sends a self-packed box to the employee’s location. The device is sent to Guardian, where it is evaluated, graded and managed according to how the client wants the device handled. Based on equipment needs, it may be redeployed to another employee in the organization, for example.