Some semblance of stability?

For many operators in the world of electronics recycling, plastics have recently become a major talking point.

Before 2017, the scrap plastics that were pulled off recovered TVs, computers and other devices were either baled or shredded and moved to brokers or other shippers that found a home for the material in China. Prices paid for this typically mixed, engineered-plastic material were modest, but electronics recyclers knew the loads would move and their costs would be covered.

Not surprisingly, China’s National Sword policy shifted the e-plastics landscape significantly, forcing e-scrap companies to hold onto material, pay to dispose of it or search desperately for new outlets.

However, e-scrap sources now say some stability is returning to the market.

Asia remains the destination for many plastics recovered from electronics. And electronics recycling companies and brokers say they’re currently able to move the material, though extra work is now required.

“Our labor cost definitely is higher, but in today’s market, the plastic recyclers are in a shortage of high-quality, cleaned plastics – we command a better price,” said Jade Lee, president and CEO of Lombard, Ill.-headquartered Supply-Chain Services, Inc., a company that does a significant amount of sorting before shipping e-plastics. “It’s still not at the level of before China’s ban on importation, but it’s much better than 2017 and 2018.”

For Far West Recycling in Tualatin, Ore., prices for recycled e-plastics are fluctuating and end markets are quickly shifting, which can be challenging. But the company is still finding buyers, said Jeff Steinfeld, director of sales at Far West Recycling.

Although China is out as a destination for the material, Far West still predominantly works with Asia, selling shredded plastic to ISO-certified facilities in various countries across the continent.

Meanwhile, Jeff Gloyd, vice president of sales and marketing for nationwide e-scrap processor URT, said today’s most robust e-plastics markets are centered on Hong Kong and other areas in Asia. Movement has been about the same for the past six months, he noted.

From January through August of this year, the largest Asian buyers of these materials were (from largest to smallest volume) Hong Kong, India, Malaysia, South Korea, Thailand, Vietnam, the Philippines and Taiwan (see chart below).

The executives from URT and Far West point to the volume of material they handle as a component of their ability to keep moving e-plastic.

Far West handles a substantial amount of plastic from municipal recycling programs as well as e-scrap materials, so the company has dedicated plastic brokers on staff. “There’s a volume,” Steinfeld said.

Similarly, Gloyd pointed to URT’s size as a key factor in the company’s ability to continue moving e-plastic with limited disruption. The company has been able to maintain relationships with recycled plastic buyers who moved their equipment out of China due to the recent import restrictions and have relocated to different points in Southeast Asia.

Gloyd added that URT has heard from several smaller processors who are struggling to move e-plastic and are interested in sending the material to URT. Although the company accepts e-scrap from other processors in some cases, the company is cautious when it comes to plastics. 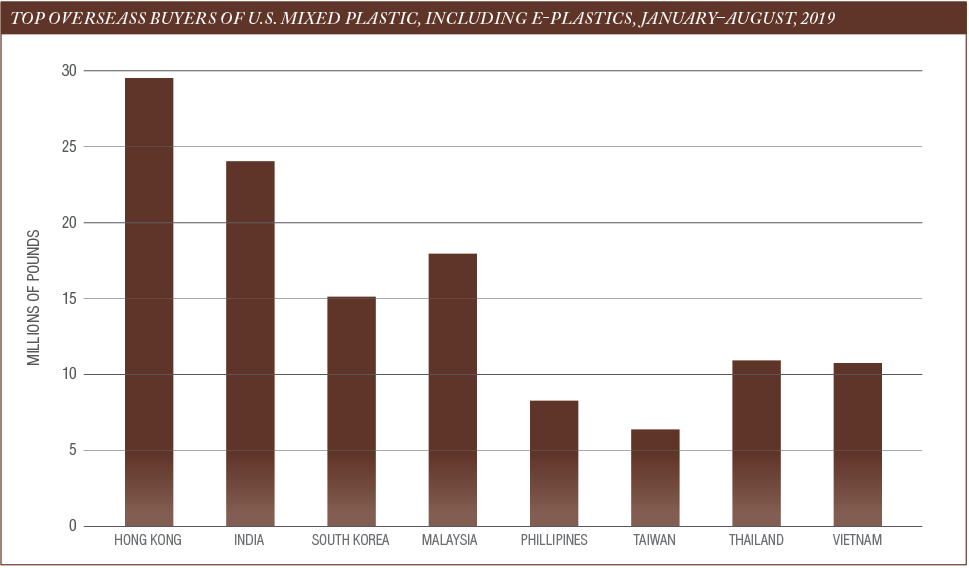 Although China has stopped importing scrap plastic, the country remains the downstream location for the vast majority of recycled plastic pellets that are being produced by recyclers who have moved to Southeast Asia, according to Lee.

In addition, many buyers will not accept the volumes of shredded e-plastic that used to move to China, and the material they do take fetches very low prices.

That’s because of the yield loss when processing: When shredded plastic is put through the first wash and separation process, between 30% and 40% of the load might end up being disposed, Lee said.

It’s also important to note that many countries in Southeast Asia have enacted stringent import restrictions of their own following China’s decision, meaning it can be hard for recyclers in Southeast Asia to source scrap plastic feedstock that will clear customs. Shredded mixed e-plastics can be rejected at the borders due to quality concerns.

Gloyd also noted that if a U.S. company were to take steps to sort e-plastics into specific resin streams, the markets would open up substantially. For example, if an operator can create a fairly clean ABS stream, “there are markets all over the world for that material,” Gloyd said.

And in fact a number of domestic processors are reportedly exploring the possibility of bolstering their sorting capabilities.

Lee, whose firm sorts and bales before shipping material to Asia, also works directly with many electronics manufacturers to help them meet the recycling quotas they’re required to hit under some state e-scrap laws. Because of those relationships, Lee’s operation has access to design information that helps the company identify the best way to disassemble devices and remove major contaminants.

As for domestic processing of e-plastics on a wider scale, Lee doesn’t see a bright future in that sector. She said entire manufacturing supply chains would need to shift for domestic ventures to pencil out.