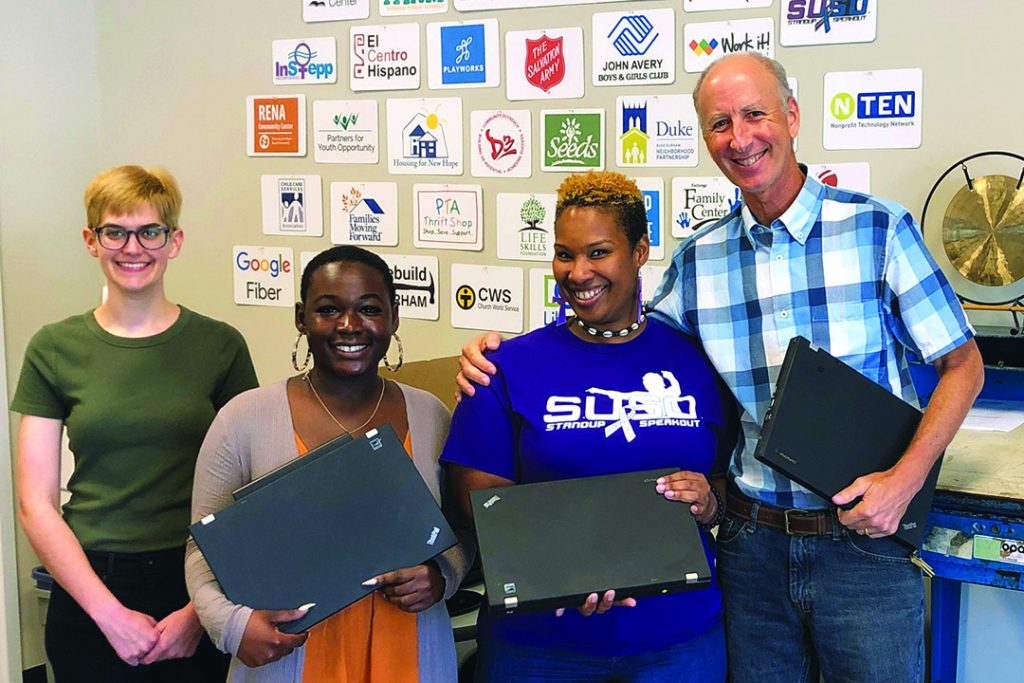 Giving away products and profits may not strike the average CEO as a sound strategy for business success, but it can pay some healthy dividends.

Just ask Larry Herst, who founded nonprofit electronics recycling and reuse business Triangle Ecycling in 2011. Over the years, the Durham, N.C. organization has grown its workforce, customer base and community support programs.

“I’ve practiced law for many years and ran other businesses – for-profit businesses – and what I’ve really learned is that the more a company gives back to its community, the better it does,” said Herst, the CEO of Triangle Ecycling. “And the more it incorporates that into its culture, the happier the people who work at the company are.”

After a career working as a lawyer, Herst founded the nonprofit group eight years ago. As equipment came in the door, a friend who ran a computer shop told him a lot of it was worth refurbishing, rather than simply recycling.

His first employee worked part time refurbishing computers, Herst said. Since then, both the refurbishment and recycling sides of the business have grown, and the first employee is now the head tech running an internship program and teaching digital literacy classes. Today, Triangle Ecycling’s 10 employees recycle about 100 tons of e-scrap and refurbish hundreds of computers a month, Herst said.

Triangle Ecycling receives scrap electronics from consumers and provides ITAD services for businesses, which tend to generate equipment that’s more re-marketable than consumer-grade electronics. “Most of what we refurbish are computers that come from our corporate and organizational clients like nonprofits and schools,” Herst said.

Triangle Ecycling collects material from local  businesses with 16-foot box trucks. It also partners with a logistics company, allowing it to accept donations of computer equipment from across the U.S. Individual consumers can drop off used electronics at Triangle Ecycling’s facility or at a number of local partner sites.

When computers come in the door, Triangle Ecycling wipes their drives to NIST 800-88 standards or, if they’re too small for reuse, drills them with a drill press, Herst said.

Equipment destined for recycling is manually dismantled, and every 10 days or so, an 18-wheeler picks up 12 to 20 pallets of the sorted e-scrap, Herst said. The material goes to Blue Sky Solutions, an e-scrap processor with locations in Raleigh, N.C.; Charlotte, N.C.; and West Palm Beach, Fla. 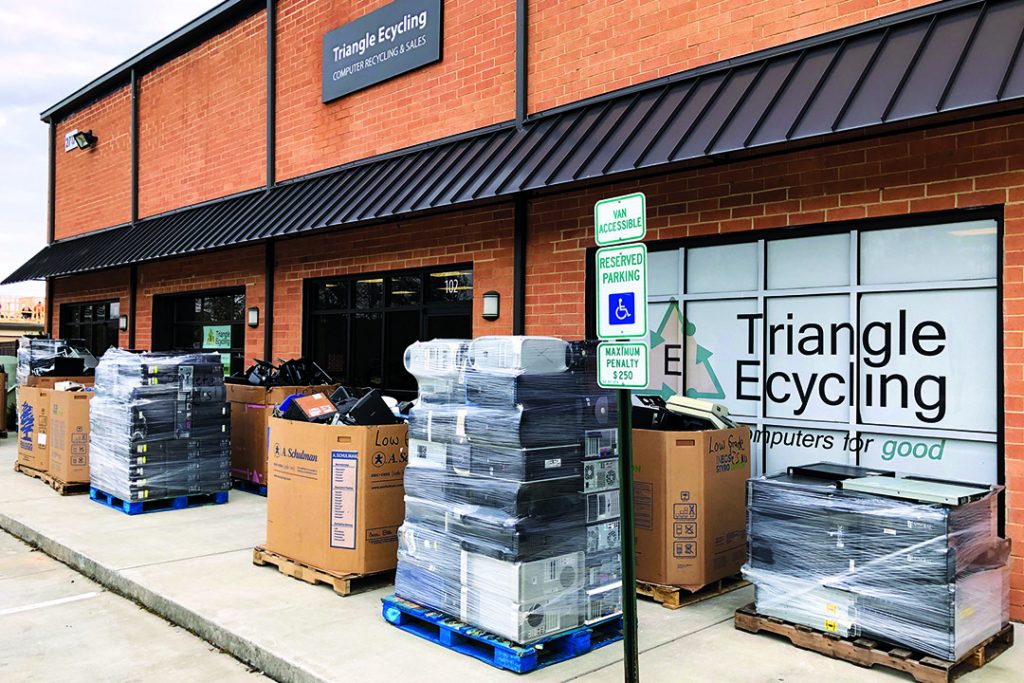 Triangle Ecycling receives used electronics from individuals and organizations, although most of the devices it refurbishes come from the ITAD services business.

Computers are refurbished based on the type of processors they’re running. If they have i5 or i7 processors (those are Intel categories of processor families), Triangle Ecycling will refurbish the device. That involves testing and, if necessary, replacing components. That does not include re-soldering motherboards or replacing most laptop screens.

“If you look at the time that it takes and the value that you would capture from it, it’s usually just not worth it,” he said.

That being said, Triangle Ecycling also has a devoted customer base of gamers and others looking for retro equipment. Employees also love the nostalgia of the old devices

Most of Triangle Ecycling’s revenue comes from used computer sales, and a smaller percentage comes from recovered commodity sales, Herst said. The group charges fees for taking CRTs and printers, as well as for some corporate pick-ups, depending on the distances and labor involved and the estimated value of the equipment being collected.

“We don’t take any money from grants or gifts,” Herst said. “One of my goals is for us to be a fully sustainable business, and we are and always have been.”

Herst’s initial goal in founding Triangle Ecycling was to keep electronics out of landfills and to create some jobs. Over time, he found other ways to give to the community, including through education.

Triangle Ecycling runs an internship program in which local high school juniors and seniors come in two or three times per week after school to learn about computers. “It gives them a great first job experience,” Herst said.

The nonprofit enterprise also helps lower income people obtain quality computers. This is done through a number of strategies. In terms of equipment donations, Triangle Ecycling sets up computer labs for other nonprofit groups, for use either by their staff members or clients. It also gives computers to youths who graduate from local nonprofit programs such as the Durham Literacy Center and the Boys and Girls Club.

In addition, Triangle Ecycling sells computers for well below their market value so low-income people can afford them. The group may sell a computer that could move on eBay at $400-$600 for $50-$200 locally, Herst noted. “I consider that a way of bridging the digital divide by helping the lower socio-economic level of our community have access to some of the best technology,” he said.

The organization also donates 10% of profits to the Durham Public Schools Foundation, which provides grants to students, teachers and families.

Staff members also take pride in the good the company does in the community. That fact helps to reduce turnover. Additionally, the organization doesn’t need an advertising budget to get exposure.

“I feel like when you have a good mission like this, a lot of people want to hop on the bandwagon and be part of it,” he said. “Through that spreading of awareness, we get good marketing.”