The e-scrap industry in recent years has witnessed declining volumes of used electronics collected and recycled under legislated state programs. This development is not surprising – the shift from larger, heavier devices, such as CRTs, to thinner displays has been well-documented. But it does carry major implications for some state programs.

Several states have already made modifications to their laws to account for the declining volumes. Others have not, and the level of difficulty in getting legislated changes accomplished may prevent them from changing in the near future.

Because this is an issue stakeholders are likely to be confronting regularly in the coming years, it’s important to look at the how we arrived at this situation and how declining weights are set to continue affecting e-scrap programs nationwide.

A march toward weight targets – and challenges

The first few state electronics recycling laws to come on the books did not include weight-based goals.

California, Maine and Maryland established programs (in 2003, 2004 and 2005, respectively) in which manufacturers were not required to meet a specific target in terms of pounds. Instead, these programs set up funding mechanisms and let the total amount requiring coverage be whatever was returned. In California’s case, funding came through a fee paid by consumers purchasing new devices. Maine and Maryland established different forms of manufacturer funding.

The state of Washington’s law, passed in 2006, was the first to make “pounds collected” a driving factor in requirements set out under a program. However, there was no overall pounds target, just a relative percentage target between the state’s “standard” plan and any “independent” plans. But since Washington has never had an approved independent plan, this target has been irrelevant.

Minnesota’s law passed in 2007 and was the first to explicitly use weight-based targets (measured by sales of new products) to determine collection requirements for each manufacturer. The law required manufacturers to report the weight of products they sold into the state each year, and then manufacturers were mandated to collect 80 percent of that sales weight total through recycling programs. The idea was to make larger manufacturers cover more of the recycling costs and perhaps to give an incentive to manufacturers to make lighter-weight products, thus reducing their contribution to the recycling stream of the future.

The Minnesota system did not dictate how manufacturers were to set up recycling programs, allowing them to develop methods they found most efficient. Other Midwest states – including Indiana, Illinois, Pennsylvania and Wisconsin – copied and made modifications to this basic approach of sales-based collection requirements. The actual percentage of sales to be collected by each manufacturer and list of covered products varied between the states, but all carried the basic requirement for manufacturers to track the pounds they sell in a state and collect a certain percentage. In addition, all these state programs were set up to penalize manufacturers if their collection results were lower than their targets.

Some other states that passed electronics recycling laws during the great wave of activity in this realm from 2007 to 2010 took a slightly different approach. Like the systems in the Midwest, these states adopted collection targets in terms of pounds but chose not to base the targets solely on sales weights. States including New Jersey, New York, Oregon, Rhode Island and Vermont instead set an overall statewide target in pounds or a per-capita equivalent, and then assigned manufacturers a percentage of that overall goal. 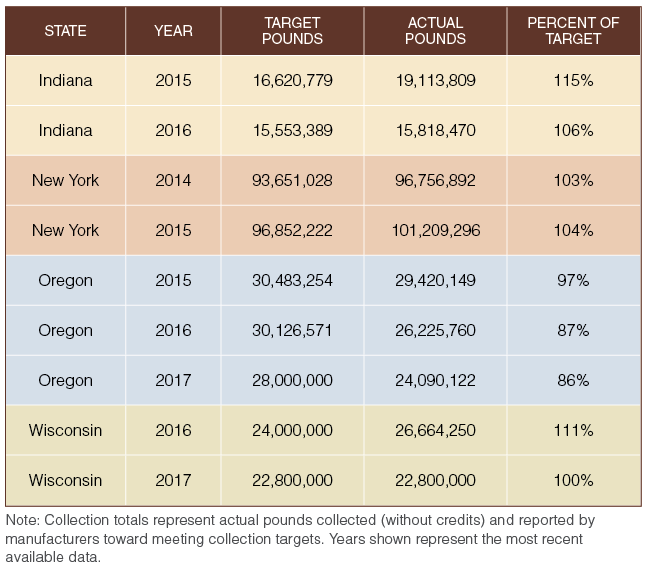 Unlike the Minnesota model where the total “pie” and each manufacturer’s individual slice are determined by current sales (in pounds), the states in the second group create a total target that can be based on many factors. Such factors include prior-year collection data, trends in other states and the addition of new covered products (Oregon added printers in 2015, for example). The size of each manufacturer’s slice is usually determined by market share, but it can include an element of brand return share, which is defined as the percentage of a manufacturer’s products in the actual recycling stream. Oregon and Rhode Island, for instance, incorporate brand return share into the calculus they use to assign manufacturer targets. Still other states, including Hawaii, North Carolina, and South Carolina, have a similar approach but limit the goals to TV manufacturers.

The two primary approaches to setting weight-based collection requirements encounter similar challenges in a market where total weight is falling.

The issue is more pronounced in the “Minnesota model” states since the drop in sales weights precedes the drop in collection volumes by several years – essentially, manufacturer requirements may be lower than the amount being returned in collection programs, leaving a funding gap. In states where manufacturers are not required to collect in all geographic areas, this reality has led to some collection programs being discontinued after volumes stacked up and recyclers charged fees to collectors to handle the material.

But “statewide target” programs also face challenges, mainly because it can be difficult to predict when the decline in weight of collected material will begin and how sharp it will be. Some of the states in this category give their environmental regulatory agencies latitude to set the overall target at whatever level agencies deem appropriate; others allow for the target to float up or down within a given range based on the previous year’s actual data. Both approaches carry drawbacks. Similar to what’s being seen under the “Minnesota model,” there’s the potential for collection programs to be cut back or stopped once manufacturer goals are met. Another possibility is manufacturers being penalized for not meeting targets, despite collection programs being kept the same.

Finally, it’s important to keep in mind that the maturity of state programs means the nation’s backlog of material in need of processing has been slowly cleared out. In essence, the industry has worked its way through the low-hanging fruit. That fact, together with lightweighting trends, can result in unscrupulous practices, such as double counting of weight collected or accepting out-of-state or non-covered devices in a given program.

Digging into the numbers

So what is data showing in terms of the weight being collected versus target weights in different programs? The table above lays out the results from four sample states.

In most states where sales numbers determine the statewide goal (such as Indiana and Wisconsin), manufacturers can meet the declining target. However, when the total amount being collected by recyclers is above the target, that means recycling of some material is not funded by manufacturers.

Also, even though the numbers from Indiana show the targets were met, these results must be viewed in the context of the overall 35 percent decline in the target from 2010 to 2016 (see chart below). 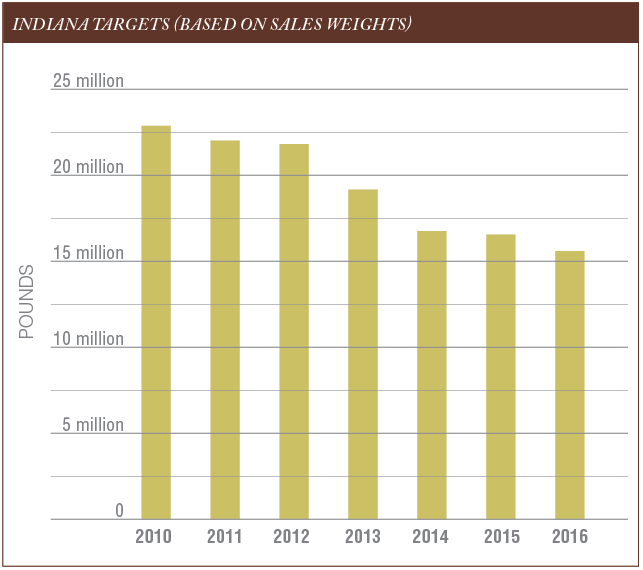 Other states with sales-based collection targets show a similar trend in overall declines in required pounds for manufacturers to collect.

We can also quantify the lightweighting trend through a few pieces of data tracked by the National Center for Electronics Recycling (NCER). The first is the total estimated pounds sold nationwide (this is determined using national market research data). The data estimates rely on an average-weight-per-device statistic that is also tracked and updated each year.

NCER’s tracking shows that in 2014, the total weight of common household electronics covered by most state programs was slightly less than 2.5 billion pounds. By 2017, that number had dropped to below 1.5 billion pounds.

The decline has been most pronounced in TVs, where the trend toward thinner, lighter devices was initially offset by larger screen sizes being sold but where lower total weights are now the norm.

At the same time, it is important to note that the addition of entirely new product types can spark notable weight variations within the electronics stream.

Tablets illustrate this example – their fast rise in sales coincided with the decline in desktop PC and monitor sales, and that meant a lighter stream. It takes the equivalent of at least 30 tablets to equal to the weight of one desktop and monitor combination (and that’s in the post-CRT era).

But it’s also dangerous to jump to conclusions in predicting how deep a product type’s influence will go. Tablets sales themselves have now leveled off and have not displaced sales of other types of computers.

Nonetheless, we can look at data pertaining to current sales of electronics to get an understanding of the total weight that will eventually be recycled – and it seems clear that the weight decline will be continuing for recycling programs.

The chart to the right lays out estimates from NCER’s 2016 electronics recycling stream study with The Sustainability Consortium. Despite there being an increase in number of units collected in the U.S., it’s predicted there will be a 20 percent decline in the overall weight of electronics collected for recycling by 2020.

Models of the future?

Recognizing these challenges, two states have revised their targets to address some of the shortcomings in their initial models.

In 2016, negotiations between the state of Minnesota, manufacturers and recyclers yielded a legislative change that removed the individual sales-weight-based target for each manufacturer (among other changes). Instead, the revisions to the law set a total statewide target at 25 million pounds for 2017, dropping to 21 million pounds in 2019. In the years beyond that, the total obligation will be set by the actual pounds collected (the target will be based on a two-year average). Each manufacturer must collect a certain amount of that total obligation based on their market share percentage with the covered products they sell. This change removes the tie between current sales pounds and the amount that needs to be collected each year.

Illinois went a step further in 2017, removing the collection pounds target altogether. Under the state’s revised Consumer Electronics Recycling Act, manufacturers must individually or collectively cover a minimum number of collection sites in each county that opts in to the manufacturer-funded program.

Once certain conditions are met, the manufacturers must cover the transportation and recycling costs of all covered devices returned to those locations throughout the year, without limitations or required minimums on pounds. The manufacturers can cover all statewide sites individually or through a collective “manufacturer clearinghouse” to divide up the responsibility. For the first year, all manufacturers will be working through a clearinghouse.

The revised Illinois law represents the most radical approach to dealing with the implications of declining weights under electronics recycling programs. Whether it is best way is yet to be seen, and other states may wait to monitor how the new approach plays out.

The model being employed in some states – including Minnesota, now that its revision is in place – to allow the annual goal to float down based on prior-year collections may work as well, since declining actual pounds should keep pace with decreased targets.

There will be several more years of this downward weight trend, at least until CRTs no longer represent the dominant weight collected under consumer recycling programs. When that change happens, we will see more calls to evaluate whether weight-based goals are the most effective approach for ensuring equity of costs among manufacturers and maintaining consistent collection opportunities for consumers.

Jason Linnell is executive director for the National Center for Electronics Recycling. He can be contacted at [email protected]