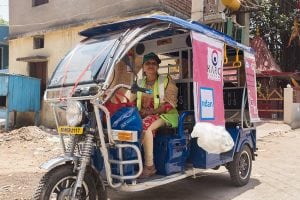 An Indian wastepicker named Reema in her electric rickshaw, which she uses to collect e-scrap from local repair shops.

Policymakers across the globe recognize the need to engage informal workers in collecting, aggregating and dismantling electronics, given their significant role in managing most of the e-scrap in emerging economies.

But finding ways to effectively bring the informal sector into a government- or producer-backed collection and recycling system is an enormously complex challenge.

In India, for example, the past decade has seen several multilaterally funded pilot initiatives that tried to connect informal collectors to formal dismantlers and recyclers to divert material away from unsafe informal processing.

But few were successful. In general, the projects found that informal processors could offer informal collectors and dismantlers higher prices than formal recyclers could. In addition, material that does go to the formal sector is often first cherry-picked for high-value components, and subsidies to formal recyclers, as part of pilot initiatives, proved unsustainable.

However, there are recent examples that point to possibilities when it comes to effectively engaging India’s informal actors. And one of the most encouraging comes from a group called Karo Sambhav.

Driven to bolster system efficiency and reduce negative social and environmental impacts from scrap processing, Karo Sambhav began experimenting with ways to engage informal workers by targeting lower level aggregators. The group provided these individuals with new skills, trustworthy financial transactions and access to a digital economy by assisting them with setting up bank accounts and tax identification.

Most transactions in the informal “gray” market are cash-based. Karo Sambhav’s representatives first engaged with informal workers to build trust and create inroads with aggregator networks. Since several of Karo’s field staff have a background in social work, community organizing, or international development, they leveraged their expertise to build relationships. 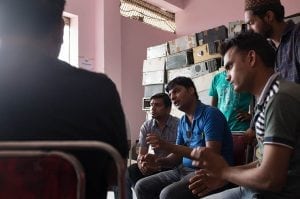 Vikash Rajput, who leads outreach to aggregators on behalf of Karo Sambhav in the Delhi markets, holds a meeting in May of this year with informal aggregators in Mustafabad.

Once Karo Sambhav staff were able to convince them to make smaller trades, they could eventually convince them to transition to digital payments after helping workers establish bank accounts and register their tax information. Some workers began to prefer digital payments once they saw money deposited immediately into their bank accounts, thus alleviating stress over the security risks when carrying large sums of cash. Karo Sambhav provided legitimate business opportunities to waste aggregators by connecting them to formal e-waste take-back channels. In this way, Karo Sambhav helped formalize these aggregators and dismantlers (depending on how one defines “formal”).

Once smaller aggregators began to work more exclusively with Karo Sambhav, staff helped them with business development and public presentation skills. In some cases, these realities increased personal confidence that aggregators applied to other areas of their lives.

The Karo Sambhav case study illuminated other important points that should be considered by stakeholders looking to engage informal e-scrap processors elsewhere. One of the most important points is that groups will want to fully understand local material markets and trading patterns before attempting to effect change.

In India, several non-governmental organizations (NGOs) have extensive experience working with waste pickers, providing them, for instance, with organizing platforms to advocate for formal pay and a more structured work environment. Such NGOs have mostly worked in municipal solid waste (focusing on organics, paper and plastics) or worked in other capacity-building efforts for informal workers in other sectors and services.

But Karo Sambhav, in partnering with these groups, discovered many lack awareness of the intricacies of the e-scrap market. It took time for groups to grasp the nuances in pricing, such as which electronic scrap material commands higher prices.

NGOs also had to learn how to develop new relationships with aggregators that already operate successfully with an established clientele.

However, for some, their businesses grew once they learned to navigate the market. For instance a woman named Reema, an informal collector in Patna, who first joined a local waste picker collective in 2007, grew her skills quickly in learning how to negotiate e-waste prices from local repair shops. She is the first women in her community to operate an electric rickshaw and spends her day driving throughout Patna collecting e-waste in her vehicle. With more skills, she is also able to earn more, and, she says with a smile, “is more confident.”

In the end, Karo Sambhav’s efforts made clear that the key to bringing informal players into the fold of a formal framework is meeting those individuals on their terms and working slowly to show them the practical benefits of any procedural shift.

Verena Radulovic is an independent writer and photographer who has been working on an exploration of electronics reuse and recycling in different countries. Look for a feature article from her in the Fall 2018 edition of E-Scrap News in which she outlines the key steps to implementing formal e-scrap frameworks in emerging economies. Radulovic can be contacted at [email protected].