By now, many readers have likely heard news about Home Depot reaching a $28 million settlement with California’s Alameda County over the home improvement giant’s disposal practices involving, among other things, electronic waste.

The settlement was announced in March, but the case goes back to the 2013-2015 period when company trash compactors at some 31 Home Depot stores were found containing hazardous waste – as well as customer data. Prosecutors alleged that hundreds of Home Depot stores and distribution centers in California “were routinely sending hazardous wastes to local landfills not permitted to receive them and putting sensitive customer information at risk of exposure.”

Most the $28 million fine will be paid out in the form of civil penalties.

The Home Depot case is just one of many involving retailers that have demonstrated poor judgement when it comes to their IT equipment and waste disposal practices. Proper management of end-of-life electronics would have spared major hits to these companies’ pocketbooks and reputations.

So why have retailers been willing to turn a blind eye to proper disposition procedures when the risk is so high?

California has gone after plenty of retail giants beyond Home Depot that were alleged to have done similar things on the electronics waste front.

One of the cases involves a settlement forcing 57 AutoNation dealerships and collision centers to pay $3.4 million. Just like in the Home Depot case, inspectors looking into AutoNation activity uncovered improper management of hazardous waste, including illegal disposal of IT equipment inside the service departments of several AutoNation sites.

Meanwhile, last year, dozens of California district attorneys announced a settlement with Big Lots Stores. The company was ordered to pay more than $3.5 million in civil penalties, costs and supplemental environmental projects after it was found improperly disposing of hazardous waste, including electronic devices and other e-waste. The authorities reported the following: “Big Lots employees disposed of hazardous waste in ordinary dumpsters bound for local landfills unpermitted to accept the waste, rather than having the waste lawfully transported to authorized hazardous waste facilities.”

Dollar General is another retailer recently found to have acted in similarly improper ways in California.

It’s not hard to understand why retailers seem to be finding themselves in this kind of regulatory hot water more often than other corporate heavyweights. Retailers with dozens of brick-and-mortar sites have a bigger environmental bar to jump over because their physical footprint is far larger than that of companies in other sectors. Managing sprawling physical networks is not easy. Obviously, if you are a large retailer, you have a bigger geographical presence, and it is easier for state or county environmental inspectors to show up and hold you accountable. California is the most advanced enforcer of environmental code in the United States, so it’s not shocking that so many of these cases are showing up in the Golden State.

When it comes to ITAD (IT asset disposition), retailers’ strength is their recognition of the problem. In my company’s recent research on ITAD in the retailer realm, we found that retailers are fully aware of the problems they can be facing if found in breach of environmental laws.

They also say they want the help from ITAD companies.

But they have two problems: Companies in the retail realm are incredibly cost sensitive, and they cannot figure out a way to structure their ITAD programs in a business that has so many decentralized and geographically spread retails units. Often, each individual unit will run its own show, operating out of view of corporate compliance in some cases.

In our most recent survey of the business sector in the U.S., we spoke to 31 of the largest retailers in the country.

Ironically, but perhaps not surprisingly, considering their geographical footprint, half of the companies reported “environmental concern” as a key reason for their decision to outsource PC client disposal. And when discussing the handling of point-of-sale terminals (POS), environmental concern was cited by 60 percent of the retailers. This far outpaces what was reported by other industries. For example, environmental concern when disposing of PC clients as a reason to outsource was reported by 24 percent of the companies operating in the financial sector and 28 percent of health care institutions. Obviously, retailers do not want to see these devices ending in places where they could be facing big liabilities.

Our research finds that while 70 percent of U.S. enterprises outsource their ITAD function to third-party professionals, out of the 31 large retailers we surveyed, 81 percent hired professional companies to outsource such activity. That’s a commendable figure, and one that hints that retailers are aware of the consequences of poor practices.

But as the cases involving Home Depot and others illustrate, these companies seem unable to fully control what their individual stores are doing. In the case of Home Depot, the problem was not just with a single store, but an entire region. The company appears to have had trouble getting regional leadership to understand the consequences on non-compliance. This is a common struggle for businesses in the retail sector: Compliance mandates come from the top but require a willingness to execute at the bottom. 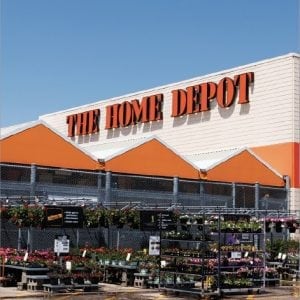 The Home Depot was forced to settle with one California county for $28 million earlier this year in a case involving improper disposal of e-scrap and other material.

Another reason for non-compliance among retailers likely stems from the fact they tend to use a variety of disposition approaches. Outsourcing to professionals is only one of the many venues that companies choose to dispose of their assets. It is possible that an ITAD firm is used for the disposal of a retailer’s data center equipment as well as PCs and servers from the corporate headquarters and regional offices, but not for the disposal of equipment such as POS and terminals from retail stores themselves.

In fact, 27 percent of the retailers contacted in our research were honest enough to report that they also engage in IT equipment disposal via waste. In addition, some companies say they also resell directly to employees and gift assets to charities without the support of professional ITAD companies.

It’s worth noting in this discussion, however, that some improvements may have been made at the retail level over the last couple of years. The examples cited at the start of this story generally describe improper actions that took place between 2013 and 2015. Our research began after 2015, and since then, practices and mentalities have undoubtedly evolved.

So yes, retailers can do much better. And in our research, we aimed to find out what has been standing in the path of progress.

Economics is one issue. Of the retailers we surveyed that do not outsource ITAD, most report ITAD costs as being too high. One can hope the California court cases would act as an eye-opening moment to convince management to set aside proper resources.

Concerns about dangerously centralized management will be harder to address. Our survey showed 82 percent of retail sector companies had their IT departments manage the day-to-day operations tied to ITAD (versus 72 percent for the entire enterprise base). However, IT departments tend to be centralized functions residing in corporate headquarters, which means in the retail sphere, these IT departments will be less in touch with the brick-and-mortar stores.

IT department staff surely cannot be in all AutoNation collision centers, for example, so corporate compliance must be focused on creating rules of engagement and associated structures that would direct the collision center managers and staff to follow proper procedures.

The distributed nature of brick-and-mortar retail will not change, but management needs to adapt. Although proper practices begin with top management awareness, creating structures that trickle down to local stores must be a priority, and compliance officers must be at the forefront of pushing such movement to take place.

For retailers looking to shield their bottom lines and brand images against such risk, the journey begins by identifying the proper ITAD service provider to help. There are some good choices out there in terms of companies that could help retailers put together a comprehensive program and, at the very least, up retailers’ standards of practice and oversight.

For ITAD vendors, these various court cases in California are a fantastic opportunity to step up and showcase their abilities to deliver services that an entire industry needs. But here’s the issue: ITAD firms must have a very retail-centric, go-to-market approach if they want to win business. A vague sales pitch is no longer enough to differentiate a service provider from its competitors.

Instead, relevant skills and systems thinking must be demonstrated, and ITAD hopefuls must speak the same language as the prospective retail client, or any other type of client.

David Daoud is the managing director at Compliance Standards LLC, overseeing research on the supplier and vendor ecosystem and on the demand side. He has researched the mainstream IT hardware market since 1996 and expanded into hardware disposition research in 2003. He can be contacted at [email protected].