A look at one state’s decade-old e-scrap program 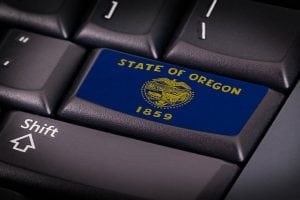 As Oregon E-Cycles approaches its 10th birthday, E-Scrap News took a look at how one of the country’s more mature state programs is performing.

Oregon E-Cycles is the Beaver State’s extended producer responsibility program for TVs, computers, monitors, printers and peripherals, such as keyboards and mice.

An analysis of program data shows that, for years, collection obligations have been decreasing. And next year they’re slated to drop more than 20 percent. Still, actual collections have come in under target for most of the life of the program.

Regardless, stakeholders see a well-functioning program.

“That’s correct about the state lowering the obligations, and still the programs haven’t met the lowered targets. Despite that, I would say that the Oregon program is functioning overall very well,” said Jason Linnell, executive director of the the National Center for Electronics Recycling (NCER). “There have been a steady number of collection sites that accept year round and cover all portions of the state.”

Indeed, the program hasn’t experienced the accumulations of material, escalating costs to local governments and decreased collection opportunities that have drawn negative press in some other states, including New Jersey, New York, Pennsylvania and elsewhere. That’s not to say it hasn’t faced challenges, however, and efforts are afoot to boost consumer awareness.

Three different electronics collection and recycling programs make up Oregon E-Cycles. Electronic Manufacturers Recycling Management Co. (MRM) and Reverse Logistics Group Americas (RLGA) each run their own programs. A third program is run by NCER, which is a contractor working on behalf of the state.

The programs are required to hit collection targets set by the state each year. Those targets have been based on a calculation that takes into account per-capita collection weights from multiple states and Oregon’s projected future population.

Where the pounds went

Oregon Department of Environmental Quality data shows pounds recycled by processor last year, as well as which OEM program the processors were paid by:

For 2019, Oregon DEQ set a collection target of 17.25 million pounds, a 21 percent decrease from 2018. The 2019 determination was the product of a different calculation than used in previous years. To help them arrive at the 2019 number, staff looked at the results of a number of different statistical models.

“We think the new methodology has led to a target that is aggressive but realistic,” Tricia Conroy, MRM’s executive director, wrote in an email to E-Scrap News. “It will require manufacturers to continue program efforts to collect as much weight as we can – but we believe it can be reached.”

Blake Bennett, Oregon E-Cycles specialist at DEQ, said that although the department hasn’t done an analysis, he suspects the falling collection weights are because households may have cleared out their backlog of devices in earlier years.

Linnell noted that the decreased in pounds collected in Oregon mirrors the decrease in other states with long-running statewide programs. For example, the trend has been seen in neighboring Washington state.

Overall, actual pounds collected have fallen short of the obligations since 2011, according to data from the Oregon Department of Environmental Quality (DEQ). Programs can accumulate credits for over-collecting, and they can use those credits in later years to make up for shortfalls. Since 2011, they’ve used credits several times to meet their targets.

“We have been working hard to meet target all years but the weight available for collection – in Oregon and Washington especially – has been dropping off rapidly so the targets have still been too high even when the state has lowered them,” Conroy wrote. “The Oregon DEQ has to work under the requirement in state law that the target be set far in advance of the program year. The decline in collection has been rapid in Oregon and Washington so it’s been challenging to have targets that are realistic for manufacturers to meet.”

Loretta Pickerell, manager of the materials management section at DEQ, noted that in some years, it was the state contractor program that undercollected. But, unlike MRM and RLGA, it doesn’t pay an undercollection payment.

When the statute was set up, the original intent was to only have the state-run program, but OEMs requested the option to run their own, so a provision was inserted allowing that, she said. MRM and RVGA get to choose which OEMs they represent, but the state-contractor program doesn’t and ends up representing a large number of smaller companies. For intentional purposes, then, the state contractor program is treated differently than the others, she said.

DEQ works collaboratively with the OEM programs, Pickerell said, although there has been some angst on the part of OEMs about the undercollection payment and its role in the program. The department doesn’t want the annual collection determinations to be the main driver of the program because its hard to predict how many pounds are available from year to year.

Instead, DEQ focuses on promotion, education and convenience to the consumer, she said, noting that state law requires year-round program promotion and collection.

“We’ve been pretty happy with how the program has been running,” she said.

Linnell said the state contractor program and others have been trying to get creative about increasing awareness of drop-off sites to make sure the declining pounds isn’t because of a lack of effort.

“We are doing online ad campaigns, adding electronics collections to existing [households hazardous waste] regional events, asking local retailers to increase in-store outreach, and asking municipalities to include OR E-Cycles info in their newsletters and other communications, among other efforts,” he said.