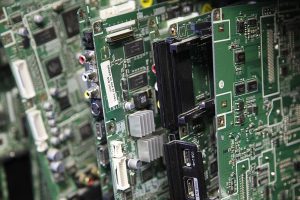 An IT asset disposition company has received a high-profile Circulars award from the World Economic Forum. The recognition comes as Apto Solutions prepares to launch a new device-leasing program.

The Atlanta-headquartered company won the Young Global Leaders Award for Circular Economy SME (small to medium-sized enterprise). The awards were given out during the World Economic Forum last week in Davos, Switzerland.

The California, Georgia and Texas facilities processed more than 19 million pounds in 2017 (numbers for Ohio were not immediately available). About 60 percent of that went into reuse markets and 40 percent recycling/commodities recovery markets, according to data provided by the company. According to a video from award organizers, since its founding, Apto Solutions has repositioned more than 10 million and recycled more than 3 million devices.

Kilkelly said the company has begun offering a program through which it leases mobile devices to organizations, repairs them when needed, takes them back when they’re retired, and recycles or resells them. The idea is to allow the customer to “decouple” from the OEMs and cell carriers by working directly with the recycling company, he said, noting that OEMs and carriers running leasing programs are working with companies such as Apto anyway.

“I think that was instrumental in helping us win the award,” he said.

While Apto has already started running the program for a couple of clients, it plans to officially launch it as “AptoFlex” this year. It’ll be run in partnership with Mitsubishi, he said.

A second electronics-focused company won a Circular award: Philips, a healthcare technology company. Philips took home the Fortune Award for Circular Economy Leadership. Fortune reports the company has returned about 7,000 tons of refurbished medical imaging equipment to the market and used 6,000 tons of recycled plastic in its products.