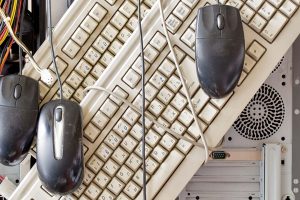 BoMET Polymer will take in shredded and baled e-plastics, sort and process them, and produce a commodity-grade pellet. The operation, located in Brantford, Ontario, will purchase feedstock from primary scrap electronics processors, as well as use material generated by parent company BoMET’s own electronics recycling division.

It plans to sell into both export and domestic markets. It aims to provide electronics manufacturers with recycled e-plastics to move closer to a closed-loop system.

“I’m hoping we’ll be able to service that market and give people a solid domestic option for what was an exclusively export material,” said David Love, general manager of BoMET Polymer.

The company has looked into adding an e-plastics processing operation for several years, particularly when the effects of China’s Green Fence began to be felt. (Green Fence was a Chinese imports crackdown that took hold in 2013.) Sorting had to be a bit more stringent: Chinese importers used to accept a mixed black or mixed white e-plastics shipment, but it became harder to move those loads without further sortation, Love said. Mixed materials were difficult to move at all.

“As we kind of saw the writing on the wall, we started to investigate opening up a domestic operation,” Love said.

The evaluation turned into a concrete plan as China hinted at further restrictions on imports. With 2017 came China’s National Sword campaign, with its confirmation of bans on certain materials and tighter quality standards for others. China’s actions have strongly limited e-plastics shipments into the country.

“When that was the case, it was the right time to work on it,” Love said. “We wanted to make sure we were one of the first ones to enter the market, so that we would be able to offer people this secondary option as their options with China became limited.”

The company is evaluating potential end markets. E-plastics have historically flowed into China shredded or baled. Although the country’s import restrictions have slowed that movement substantially, the general understanding so far is pellets will still be allowed in, as they are a processed feedstock rather than what Chinese regulators consider a waste material.

Love said BoMET is looking to sell material to electronics manufacturers. That could mean exporting, but Love said some material could stay in the U.S.

“We’re hoping the domestic market will be open for it as well,” he said. “It’s one of those things we’ll figure out as we start to get our material in the finished grade.”

The new facility will take in predominantly e-plastics, Love said, but could expand into other plastics in the future. It will be primarily looking to buy from generators in the Great Lakes region or the eastern U.S. and Canada regions.

Other companies are looking at purchasing equipment to produce a composite end product, Love explained, such as an ABS/HIPS pellet. BoMET plans to produce distinct pellets of different resins. The company will produce ABS, HIPS and other commodity-grade pellets, Love said.

The processing line is planned to have an initial capacity of 1,000 metric tons per month, Love said. The company may scale up further in the future as demand warrants. He declined to reveal the exact type of equipment the operation will use.

The facility is closing in on its final preparation stages. Equipment is currently being delivered and set up, and the company is looking to take trial loads from processors. BoMET aims for the facility to be fully operational by April 1.