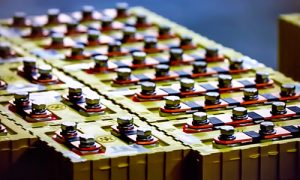 China’s early adoption of electric vehicle usage means the country is also getting an early look at the next big material in the waste stream: lithium-ion batteries.

Reuters reported the first wave of end-of-life electric vehicles is anticipated to hit China in the next few years. The country started promoting electric vehicles eight years ago, and experts predict next year could bring as much 170,000 metric tons of the lithium-ion batteries that power the vehicles into the end-of-life stream.

Officials want electric vehicles to make up a fifth of total car production by 2025, according to Reuters. Through August of this year, Chinese manufacturers produced 6.7 billion batteries, up 51 percent from the year-earlier period.

The large addition to the waste stream brings opportunities for recovery but also presents challenges for the recycling industry. Recycling operations told Reuters the cost to process the lithium-ion batteries currently exceeds their value. There is also substantial variation between different vehicle batteries, causing difficulties in automating the recycling process.

China may be poised to see the waste stream changes first, but experts are predicting similar growth in the U.S. An end-of-life battery broker recently told E-Scrap News about the safety hazards and cost challenges of dealing with electric vehicle lithium-ion batteries. He also described how experts are concerned the batteries could turn into the next problematic material.