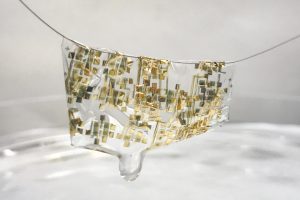 Researchers have developed a biodegradable polymer for electronics, which could complicate e-scrap recycling if it were ever adopted for widespread use.

Conducted by researchers from Stanford University, the University of California, Santa Barbara and Hewlett-Packard Enterprise, the study aimed to cut down on mounting volumes of e-scrap. The team approached that goal by developing a semiconductive polymer that would decompose, which the researchers said has not been produced before.

They also looked at the use of iron rather than gold as an electronic component. The study further explored a cellulose substrate material on which to mount the components.

“Using an ultrathin biodegradable substrate, we successfully fabricated polymer transistors and logic circuits that show high performance and are ultralightweight, but they can be fully disintegrable,” the team wrote in a paper on its findings. “Our work significantly advances organic materials to enable environmentally friendly and biointegrated electronic applications.”

The resulting electronic device was flexible and degradable using a weak acid such as vinegar, according to a Stanford news release.

The researchers noted their findings’ significance for certain electronics, including wearable technology and implants inside humans, as well as electronic monitoring devices that are dropped into remote areas.