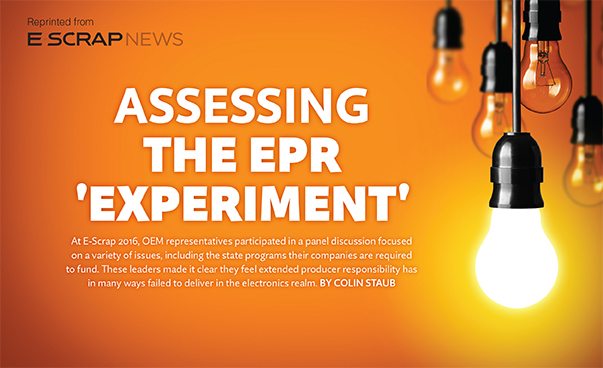 Strong opinions abound when extended producer responsibility (EPR) is up for discussion in the realm of electronics recycling. And electronics manufacturers themselves hold some of the strongest views.

Producer perspectives were loud and clear onstage at the E-Scrap 2016 conference last fall, where representatives from Dell, Panasonic, Sony and Vizio discussed EPR programs and other issues in a session titled “OEMs Open Up.”

Moderated by Walter Alcorn, vice president of environmental affairs and industry sustainability for the Consumer Technology Association, the discussion touched on some of the key arguments for and against different styles of product stewardship.

The following dialogue offers some of the most compelling perspectives on state programs from each of the panelists. It has been condensed and edited for clarity and brevity.

Beth Johnson, manager of U.S. legislative and compliance programs for Dell: There’s pros and cons of every single state – even the states will tell you there are good things about a particular law and then there are opportunities to improve.

One of the things Dell strives for is our policy. We believe that if our name is on that product, then we will offer free takeback of that product. So it’s free recycling globally. We offer free recycling of our products in 79 countries. On the commercial side we offer fee-based recycling because, oftentimes, business customers have much greater needs with retirement of assets that may be dispersed in numerous locations in the U.S. or across the globe.

So we have opportunities to cater to our customers, and we’ve been doing this for a number of years. Where the mandates come in, it’s kind of a double-edged sword. We support mandates that are reasonable. We would like to see a level playing field. With as much heavy lifting as we’ve done over the years, we’d like to see the same from others without any kind of mandate, but oftentimes that just isn’t going to happen.

The downside of some of these mandates is that … they may not be reasonable, they may not be achievable long term. And I think there is time for some of these to be revisited, to see what’s realistic and attainable. I think those of us that have been doing this for over a decade and have done this voluntarily, from a leadership perspective, we do want our voice to be heard as credible and sincere, and with the intent that we want to work this out together. I don’t speak for the industry; this is a Dell perspective and that’s not shared by all the manufacturers.

David Thompson, director of Panasonic’s corporate environment department: The electronics industry has been very different than the battery industry in that it’s much more diverse, and we’ve never been able to achieve a collaborative approach, which is something that Panasonic has always supported.

We attempted to work with other companies to establish a collaborative approach and establish MRM in 2007, and now have about 40 manufacturers that participate in the MRM program in 20 states. And I think it’s going reasonably well, but it is not a comprehensive industry approach that is going to really offer the the type of nationwide take-back program the battery industry was able to do. We’ve got 40 manufacturers, we’ve recycled about 684 million pounds since we started that program and we’re continuing to try to develop it. So I think it has been a challenge, we addressed it the best we can, either individually, as Dell has or other companies have, and then collaboratively.

I will say that I am not sure that it has had the intended effect of revolutionizing the design of electronic products. I can’t say that it’s succeeded in what was perceived to be its original intention. I thought that at the time that these were very long-lived products, and if you really wanted to incent and change the design practices of manufacturers, you needed to have some incentive system that really takes place either at the point of sale or close to the point of sale. Not 15 years in the future, when an old TV is being discarded and people want to recycle it. It really is no incentive, I think, to design a product and then wait 15 years or seven years or whatever it’s going to be to reap that design benefit. 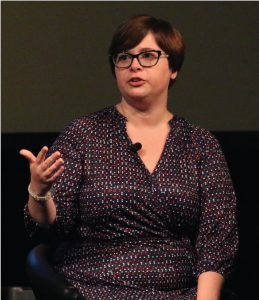 Caitlin Sanchez of Vizio noted state EPR programs can have the unintended consequence of stalling innovation because newer companies are wary of having to recover types of products they never manufactured.

Caitlin Sanchez, member of in-house legal department at Vizio: Let me try and answer answer both sides, this talk about manufacturing side, but also talk about the recycling industry side.

So I think the “state EPR experiment” is a great way of phrasing it. The idea had the noblest of intentions, but it hasn’t worked out to do what it set out to do, which was incentivizing green design and creating better products. That’s done through innovation and through consumer demands. What in reality has happened is you’re being put, as a manufacturer, in charge of running programs in 24-plus states. It is a state-level issue, but you have national and in many cases international companies trying to solve this problem for states.

From Vizio’s perspective, one of the biggest problems we have with these programs is the fact we never made CRTs, yet the bulk of the materials that come in are CRTs. So we’re paying to recycle our competitors’ legacy products. Not only is it unfair, but it puts a significant burden on our company to do this. We’ve been very fortunate and our market share has gone through the roof from when we entered this business. But what does that mean for EPR laws that are based on a market share approach? Our goals are now significantly higher than many of our competitors who actually created the materials that are coming in right now for recycling. And those materials are more hazardous and heavier.

And I see it all as being a disadvantage to other new companies. Maybe you would see more manufacturers coming on board with newer technology, newer innovations, but if they did that and their market share went up, they’re paying to cover the recycling of their competitors’ legacy products too. So it’s a real burden.

And then to flip that to the recycling industry side. These EPR laws put the onus on the manufacturers to go and set up collection networks, set up recycling programs, cover transportation logistics and all of that. So you take the competitiveness of our industry and you’re throwing that at the recycling industry. It’s going to drive down prices, it’s going to drive that competition into that industry. And you’ve seen it, you’ve seen smaller recyclers go out of business because of that issue.

Doug Smith, director of corporate development, safety and health for Sony: If you were around during the legislation development of these regulations, you would have thought that 25 out of 25 states would have us redesigning our products right now, and that there would be thousands of local recycling jobs because of the jobs this is going to create.

You know what? It never hit the ground. If that’s the experiment, and that’s the theory of what you’re trying to prove, it is an outright failure when it comes to both of those items: the redesign and local recycling jobs. None of that came to fruition.

California got it right. At Sony, we care deeply about customer service; California is a customer service program. There is unlimited opportunities to recycle not just your TV set, not just your computer, but anything with a cord. And it’s funded by the fees on TVs and monitors. In California, they fixed the problem they had, which was unfunded mandates on the local governments and communities. The other states just choose to ignore that part.

Canada got it right by being silent on how it’s financed, so manufacturers and retailers worked together, came up with a fair model, and it works great. It works as well as California does.

And you have Maine and Connecticut and Washington – they’re basically taxes. They send us a bill, we have to pay in, and if we don’t, they’ll sue us. But there’s no manufacturer involvement with those three states either.

In the other states, we have an obligation to go out, select the contractor and implement a program. Sony doesn’t have a distribution network that we could activate to get products back. So we’re at the mercy of whatever’s out there for collecting and getting it back to recyclers.

Also, I think climate change needs to be part of the equation. Why can’t we bring some value into recycling by assigning some carbon credits to it? All these opportunities that as OEMs we could add value back into the program, actually get some rewards by being proactive, are never given to us, and climate change is one of those.

Shipping glass around the world is creating about 29 additional carbon tons per container versus keeping it locally in the U.S. and remelting it again. Twenty-nine tons per container load. Is that a good idea? Does climate change matter or not? Because it’s never been brought into the e-waste world. Every time we try to bring it in, no one agrees to it. 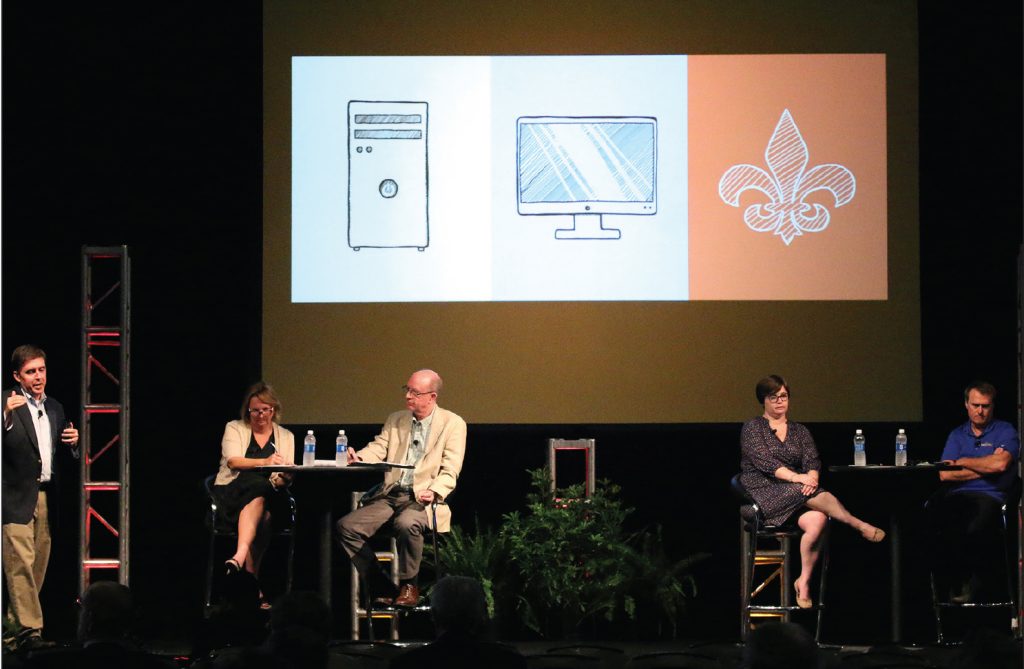