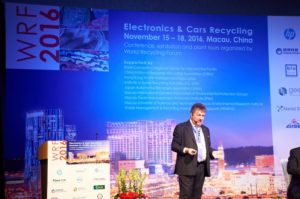 Electronics recycling leaders recently spoke about e-scrap developments in China and Hong Kong during the Electronics & Cars Recycling event, sponsored by ICM. The mid-November conference was held in Macau.

Among the topics discussed were plans to bring large-scale, advanced processing technologies to Hong Kong and an effort to formalize disassembly operations across China.

Hong Kong will soon have a new way of handling scrap electronics and appliances.

In recent years, the Hong Kong government has responded to rising concern about shipments of recovered items to poorly operated plants. As much as 70,000 metric tons annually were collected and shipped.

Because of increasing concern, a producer responsibility law was approved last March and the city sought proposals from various potential contractors to process the scrap items in the city. ALBA Integrated Waste Solutions was selected for a 10-year contract to process 33,000 to 60,000 metric tons per year. The company will receive a fixed processing fee, plus revenue from material sales.

According to Nigel Mattravers from ALBA, a plant will open next summer in the city’s Eco Park. The facility, which will be owned by the city and operated by ALBA, will include a 4-ton-per-day e-scrap line, a CRT line processing 60 units per hour and three similar-sized LCD lines. The facility will also include an electronics refurbishment building.

To feed the plant, seven collection centers are being established across the city.

The Chinese government has instituted a national take-back scheme for scrap electronics and electrical equipment. Elwin Meng, a government affairs manager with Umicore Greater China, provided a basic summary of the system.

The program involves 14 categories of waste, including computers, cell phones and display devices. Given its new nature, the China-wide system has attained a modest recovery level of 24 percent.

The program involves 109 certified dismantlers with 4 million tons per year in capacity. These firms receive subsidies from the government for their processing efforts. As more volume is generated, Meng has seen a move toward mechanical processing and away from manual activities.

Meng pointed out a number of issues with this new system. For one, six federal agencies are involved in the program. Also, dismantlers report severe financial problems because of slow payment by the government (sometimes 18 months after being invoiced). In addition, the pricing of recovered materials is not as transparent as elsewhere.

One serious issue in handling printed circuit boards is that “the government has no clue where the PCBs go after dismantling,” said Meng. This can include crude Chinese burning or leaching operations. Meng contends “we need more monitoring and enforcement” by federal officials.