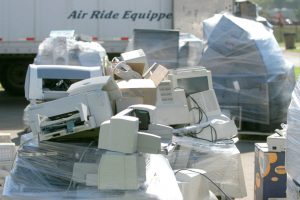 The weight of electronics recycled by Canadians continues to grow at a substantial pace, a report from Statistics Canada shows.

Canadian residents and businesses diverted 71,396 metric tons of electronics in 2012, an increase of 40 percent over the volume recycled two years previous. In 2004, the first year for which statistics are available, 10,245 metric tons were recycled.

The study, released earlier this week, indicates that over the past several years, there has been increased access to household hazardous waste diversion opportunities across the country of 35 million people. Collection has been provided by local governments as well as retailers.

The statistical analysis also looks at specific categories of e-scrap, including TVs, computers and cell phones. The following is what households told surveyors in 2013:

TVs: 26 percent reported they had at least one unwanted TV during the previous year. Of those, 54 percent said they had taken it to an e-scrap collection depot for recycling, while many others had donated it or were still holding on to it.

Computers: 24 percent said they had had an unwanted computer. Of those, 53 percent took it to a recycling depot. Three percent reported putting them in the trash.

Cell phones: 21 percent had at least one unwanted cell phone during the previous year. Of those, 24 percent took material to a recycling collection depot, and 18 percent took it to a retailer or supplier. About 5 percent had thrown it in the trash. Many were still holding on to it at the time of the interview.

The report notes the importance of retail take-back opportunities, particularly for cell phones.