This story originally appeared in the December 2015 issue of E-Scrap News. 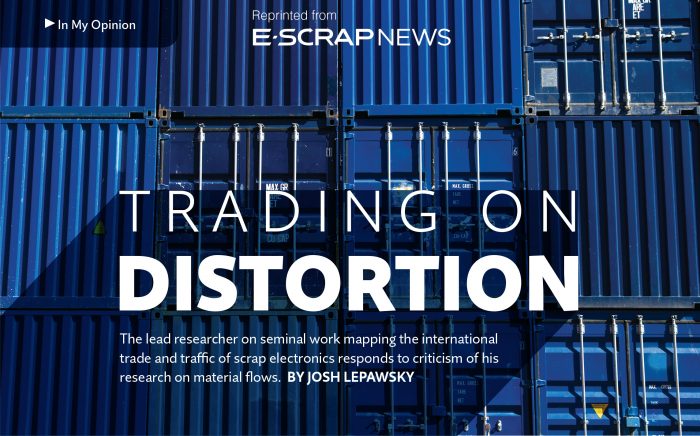 In a recent op-ed for E-Scrap News, Jim Puckett of the Basel Action Network (BAN) takes issue with a study on international e-waste flows I co-authored and published. At the core of his challenge is the assertion that “when substantial amounts of money are placed at risk by inconvenient truths, a new industry is born – the industry of denial.” The claim that my co-author and I have any incentive, financial or otherwise, to slant our findings in one way or another is a specious accusation. Nevertheless, the editorial points to some important questions: Could financial considerations affect how an organization chooses to portray a matter that concerns it? And whose economic interests might be at risk?

A watchdog with financial interests

BAN is a nonprofit organization. Its tax filings are a matter of public record. Those filings show that the organization has substantially increased its reliance on revenue from its e-Stewards certification program to fund its operations. Indeed, BAN’s revenue structure changed dramatically over the period for which such tax data are available. Since 2009, “contributions” (such as donations, gifts and grants) have fallen from about 73 percent of BAN’s total revenue to 12 percent in 2013. Meanwhile, revenue from “program services” (namely, e-Stewards) has increased from about 26 percent of total revenue to over 87 percent of total revenue in the same time period. 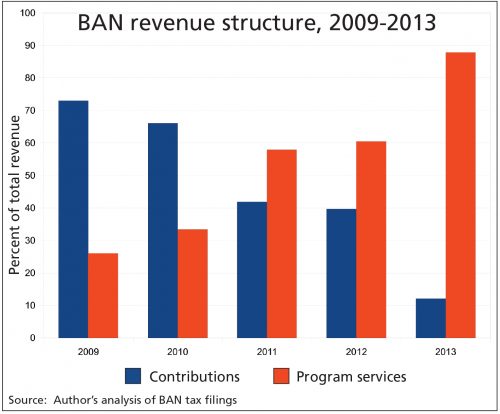 According to the e-Stewards Marketing and Licensing Fee Schedule, the activities supported by those fees include “BAN advocacy, which provides investigations that call out bad actors and promote responsible recyclers” and “(d)omestic and international lobbying and campaigning resulting in increased demand for certified e-Stewards recyclers.” In other words, BAN has a direct financial interest in promoting e-scrap recycling practices that grow the market for its certification system. So a substantial portion of BAN’s total revenue is at stake when any competing certification system or any alternative model of managing e-waste is proffered. It is, in other words, in BAN’s financial interest to deny the validity of any system, model or research that might challenge the narrative that supports the adoption and growth of its brand of certification.

The assertion that my co-author and I stand to benefit financially from publishing skewed research relies on a misunderstanding of what the organization that funds our research is and how it works. Social Science and Humanities Research Council (SSHRC) grants do not pay the salaries of research grant recipients, such as myself. Indeed, SSHRC is expressly prohibited from doing so. Salaries of grant recipients are “non-eligible expenses” when using SSHRC funds. In other words, I do not need to chase grants to pay my salary. In practical terms, this means that I am under no financial pressure to produce results that tell one story or another. Instead, I have the privilege – and responsibility – to do unfettered research and to follow the evidence no matter where it leads.

SSHRC is a publicly financed research granting agency. It funds scholarly research in a broad range of areas, including arts, immigration, multiculturalism, economics, the environment, natural resources and much else. SSHRC receives its budget from the Canadian government, but it is neither ministers nor bureaucrats who decide what projects get funded. That work is fulfilled by fellow academics who voluntarily review and assess funding proposals submitted by researchers. This process is not a selection of projects based on the ideological interest of the government of the day but is, instead, a process of scholarly peer review.

Puckett’s claim that my co-author and I are in the business of manufacturing doubt and denial about the e-waste trade is an unfounded accusation. At no point in our paper do we express doubt or denial that e-waste flows occur (nor do any of my subsequent studies). If we had been trying to foment doubt and denial, we would have taken a radically different tack. For example, instead of devoting an entire section of our paper to laying out the limitations of the data set we use, we might have left that section out altogether and refrained from making explicit cautionary statements about our findings throughout the paper.

Puckett’s editorial quotes extensively from our efforts to describe the limitations of the data set as if those descriptions count as as evidence that we are not doing scientific research. Meanwhile, his editorial forgoes quoting our explicit warnings to readers about incautious interpretation of our results. Yet, by quoting instances that Puckett claims illustrate flaws in the study, his editorial merely recapitulates what my co-author and I are trying to do explicitly: make the caveats and limitations of the data we analyze and the results they deliver as clear as possible. Making such caveats explicit is what good scientists do.

The data we analyzed are publicly available from the U.N. Comtrade database. The category we used is “waste and scrap of primary batteries, electric accumulators, spent primary batteries and spent electric accumulators” (technically called Harmonized System 2002 code 854810). These data refer to all types of electrical accumulators (lead-acid, NiCad, lithium ion, etc.), despite Puckett’s claim to the contrary. His editorial could have criticized our work in a different way and been on firmer ground. He might have pointed out that the data we used offer no way to differentiate amongst the different types of electrical accumulators. Instead, he went a different route and claimed that the data we analyzed cover only lead-acid batteries. That claim, however, is an inaccurate representation of those data.

All data and methods have limitations. Puckett’s editorial, for instance, is accompanied by several photographs presented as evidence of e-waste dumping. They are compelling because documentary photography can draw on a long tradition of presumptions about truth-telling. Yet the use of photographic evidence does not escape the problem of data limitations. Photographs are inevitably selective. They show some views, but not others. In the absence of systematic methods of picturing, there is no way to know whether what is in the frame is a singular case or a widespread pattern.

More specifically, the use of photographs of asset tags gives us a very limited amount of information about the situation from which those images are extracted. Photos of asset tags tell us only that a photograph of such a tag was taken and that the tag shows a previous “owner.” On their own, they tell us nothing about whether those machines went straight to a dump or, instead, circulated in reuse for some period of time before they reached a particular site later visited with a camera. Without an explicit discussion of a sampling method for obtaining the images, it is impossible to say to what extent these images are individual instances or part of a systematic pattern.

Similar points can be made about the use of forensic data analysis of memory devices found in hard drives and other discarded electronics. The use of this approach to tracking e-waste flows limits analysis to products and components with such storage, making it useless for tracking any forms of discarded electronics lacking such components (CRT monitors or PC and TV screens, for example). And, again, without the use of systematic sampling methods there is no reliable way to generalize from the findings of individual instances of forensic data analysis. The broader point here is that all data and methods have their limits. A key difference between our research and Puckett’s editorial is that we make such limitations explicit.

More nuanced than ‘developed’ vs. ‘developing’

Despite Puckett’s challenges to our paper, it is notable that we actually agree on more than we disagree. We are both concerned about environmental justice. We both care about international law. We also both agree that action to mitigate or eliminate the actual or potential negative effects of pollution should be based on the precautionary principle.

The data my co-author and I analyzed certainly have limitations. A substantial portion of our paper is devoted to explicitly laying out those limitations for our readers. Despite these limitations, it is notable that Puckett’s editorial forgoes a careful reading of our study. Some of our results actually lend partial support to some of BAN’s key claims about the e-waste trade. We find, for example, that there is a statistically robust tendency for e-waste to flow from richer to poorer regions. However, in contrast to BAN’s recurring message, those flows are not predominantly from the rich, “developed” countries of the Global North to the poor, “developing” countries of the Global South. Instead, these flows are largely within, rather than between, these regions.

There is definitely a topography to the e-waste trade, it’s just that the hills and valleys don’t match up to the overly blunt imaginaries of world geography that divide the planet up into North and South, developed and developing, or corollaries like OECD and non-OECD. These findings matter. If solutions to the problem of e-waste are to be found that are equitable environmentally as well as socially and economically, then policy prescriptions and mitigation measures should be designed to fit the terrain if for no other reason than some of the people most deeply impacted by them are most at risk to environmental harm as well as social and economic marginalization.

Josh Lepawsky is a professor in the Department of Geography at Memorial University of Newfoundland. He can be reached at [email protected] or on Twitter at @rubbishmaker. He is also the author of Reassembling Rubbish (reassemblingrubbish.xyz), a research project providing a holistic look at the e-waste trade.