City of Austin works toward equity in every department 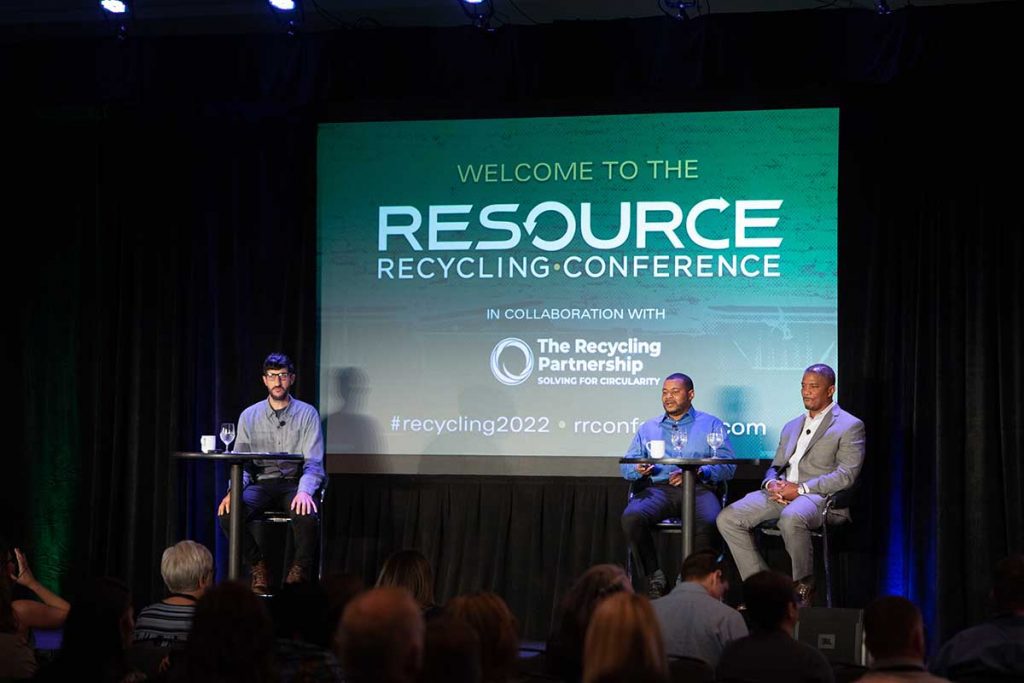 Most Americans see racism as a collection of individual actions, but it’s really an institutional problem that needs to be addressed at every level, speakers on a recent equity panel advised.

Brion Oaks, vice president of operations and equity at the Charles Butt Foundation, said in working with the city of Austin on becoming more equitable, “we’re saying we have to really rethink that, because that’s what is most harmful, is how this stuff lives in our institutions and our systems and our government.”

At the “Austin’s Journey in Equity” session on Aug. 16 at the 2022 Resource Recycling Conference held in Austin, Texas, Oaks and Ken Snipes, director of city waste agency Austin Resource Recovery, spoke about the nearly decade-long path the city is on to becoming a more equitable place to live. One key choice on that path is where to locate a planned transfer facility.

Oaks, who was formerly the city’s chief equity officer, said Austin began its equity work in 2015, following a change in the way city council representatives were elected. Prior to the change, each position was at-large, meaning candidates could be elected from anywhere in the city. After 2015, it was based on districts, which Oaks said meant “many of our communities of color, primarily Latino and African American communities, saw a lot more power and connection to our local city government than they had historically had.”

The west side of the city is 80% white, while the east side is 70% communities of color, and Oaks said historically funding for city infrastructure has been concentrated on the west side, while waste facilities were constructed on the east side, following decades of racist policy.

Oaks said that a large component of the journey to equity is “to really kind of reckon with our history, to really figure out: How did we end up as a city that is divided east versus west?”

“Almost every challenge we have as a city today is really rooted in that history,” he said, pointing out that in the city’s first comprehensive plan, enacted in 1928, the mayor and council tried to zone for race, but the Supreme Court blocked the plan.

“City officials were very innovative at the time,” Oaks said, and instead of officially zoning based on race, they withheld city services for people living in the “wrong” zone.

“If you were a Black person in Austin 1928 and you wanted water or to have your kids go to a public school, you had to pick up and move to your designated zone of the city in East Austin,” Oaks said. “It was the same for Mexican American families.”

Oaks said all large cities have a similar history, even if the divide isn’t east-west, and those decisions are reflected today in data on poverty, health outcomes, disaster impacts and policing.

The past defines the present, and Oaks said before moving into the future, it’s important to also define what equity means for the specific city.

In Austin, the city settled on the definition that racial equity is a condition when race no longer predicts a person’s quality of life outcomes.

Oaks suggested being clear about the proposal and the problem being solved. That includes looking at the history, data, unintended consequences, community engagement, implementation and accountability of the project.

For example, Oaks said it appears that poverty rates are declining in Austin, but in reality as prices rise and gentrification transforms neighborhoods, people are being forced into the small cities around Austin, which now have “double-digit poverty rates.”

“We just pushed people out,” he said. “With a lot of Austin’s issues, we’re just exporting them.”

Work left to be done

Snipes said his department primarily focuses on residential collection and contracts out commercial collection, but as part of the equity journey, it is starting to look at its services and work to see what could be done differently. Two big things he’s targeting are Austin’s bulk collection and hazardous waste programs.

The department is testing an on-call program for bulk collection in order to increase access. Along similar lines, the household hazardous waste program previously only had one facility accepting items, and it required a car to reach it, “so we immediately recognized that there’s equity issues here,” Snipes said.

“How do you provide access to everyone across the city? We’re starting to look at that now,” he said.

Snipes is also looking to deploy electric collection trucks to the east side of the city first, because there’s higher emissions on the east side, worse air quality and higher cancer rates. Average life expectancy on the east side is 11 years shorter than that of the west side, he noted.

“We believe exposure is a contributing factor,” Snipes said, so as the city explores greening its fleet, he wants to right historical wrongs.

One obstacle to moving away from diesel is that the city does not have its own transfer facility. Snipes said he’s looking to change that by constructing the facility on the west side, not the east side.

“We expect a lot of pushback,” he said, but “we’ve also committed to not siting what I term another less-than-desirable city facility on the east side.”

While property on the west side is more expensive, Snipes said it’s important to commit to making sure those types of facilities are spread out across the city and not concentrated in one single community.

Advice for other communities

It can be hard to start conversations about equity, Oaks and Snipes acknowledged. Snipes said he likes to start with an open conversation about blame.

He added that the “work to be done is focusing on what the issues are. It’s not about blame.”

Oaks said it’s vital to make sure the people closest to the problem are actually involved in solving it. For example, there are often no homeless people on task forces to end homelessness, nor anyone living in affordable housing on an affordable housing committee.

“How can we solve it and not center them in the design for it? It happens all the time,” Oaks said.

Oaks also said it’s often hard for council members to grapple with the difference between equality and equity.

“It’s a work in progress to get them to really understand that equity means that because of where some of the folks are starting out, you will make decisions that are good decisions that will not be equal across all the districts,” he said.

He’s seen successes and failures. When deciding on how to divide sidewalk bond funding, the Austin council ultimately voted to divide the funding equally across all 10 districts, despite the fact that the west side already had better maintained sidewalks and many places on the east side of the city had no sidewalks at all.

But when the city had to issue a boil water notice, Oaks said the council made the right decision in choosing to site more bottled water distribution sites on the East side because there’s a greater average distance from grocery stores there, making it harder for people to go get their own bottled water.

“Equity is not an add-on,” Oaks said. “If we’re really about achieving the mission and vision of our city and local government, how can you do this if you don’t unravel this and figure this out?”