Analysts: US OCC recycling rate may be below 70% 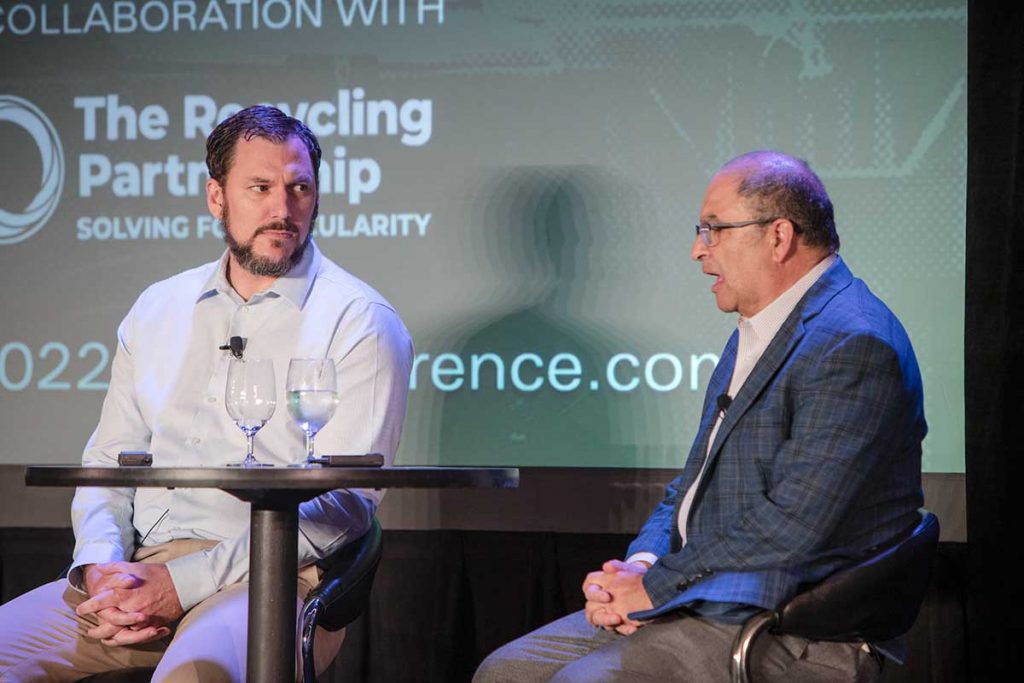 This story has been updated

Two corrugated industry experts have crunched the numbers and concluded that the OCC recycling rate is likely much lower than estimates published by the paper manufacturing sector.

Myles Cohen, an industry veteran and founder of consulting firm Circular Ventures LLC, and Ryan Fox, corrugated market analyst at Bloomberg Intelligence, estimate the U.S. old corrugated container (OCC) recycling rate is around 69%, far lower than the 91.4% calculated and reported by the American Forest & Paper Association (AF&PA) in May of this year.

Cohen and Fox presented the conclusions of their alternative OCC recycling rate methodology in a session at the 2022 Resource Recycling Conference, held earlier this month in Austin, Texas. They estimated higher OCC generation in the U.S. than was shown in AF&PA numbers, mainly due to the high volumes of boxes that come into the U.S. to hold imported goods (imported boxes are not accounted for in AF&PA’s data). Including imported boxes creates a larger denominator in the recycling rate calculation, resulting in a lower rate.

Fox, who worked for a decade in packaging sales before becoming a market analyst, published some of his OCC research in Bloomberg’s Green Markets publication shortly before the conference.

“The corrugated industry has long insisted that more than 90% of boxes are recycled each year, yet the true figure appears to be much lower,” Fox wrote in that report. “As companies seek to position themselves as environmentally friendly, acknowledging shortfalls in recycling could spur them to take concrete steps to improve it rather than repeat unsupported narratives.”

The results of the alternative OCC recycling rate methodology would mean the overall U.S. fiber recycling rate is lower than previously estimated, because mixed paper, old newspaper and other fiber streams have lower recycling rates and OCC tends to pull the cumulative fiber number up.

AF&PA’s data is widely cited and relied upon. For example, the U.S. EPA uses AF&PA’s data to help calculate the national recycling and disposal rates, including how much OCC is landfilled each year.

A glance at the dumpster

On stage in Austin, Fox said that he grew skeptical of the AF&PA’s OCC recycling rate numbers while stuck at home due to COVID-19.

The Recycling Partnership’s 2020 report “The State of Curbside Recycling” found a lack of recycling access, lackluster participation and contamination was driving down volumes of OCC recycled through curbside recycling systems.

Meanwhile, the AF&PA found the 2021 OCC recycling rate was 2.6 percentage points higher than in 2020. In his Bloomberg report, Fox wrote, “We’re skeptical that OCC collections have improved amid the surge in e-commerce over the past decade, especially in light of the Recycling Partnership’s curbside findings.”

Fox noted that his alternative methodology considered boxes holding goods produced overseas that were imported by the U.S. The AF&PA counts those boxes in its recycling rate numerator, he reasoned, so they should also appear in the denominator, or scrap generated.

For its part, the AF&PA has acknowledged that its numbers don’t include boxes holding imported goods. For example, in a 2019 press release reporting the 2018 OCC recycling rate at 96.4%, AF&PA wrote that “these particular boxes are not included in the OCC recovery for recycling rate calculation because there is no reliable data on their volume. If they were factored in, we estimate the OCC recovery rate would be several points lower than 96.4 percent.”

Making an estimate on imports

To develop his numbers on imported boxes, Fox cited a National Retail Federation report that estimated 25.8 million 20-foot-equivalent-unit containers (TEUs) were imported into the U.S. in 2021 for retail. His research showed the top importers include major retailers such as Walmart, Target, The Home Depot, Ashley Furniture, Lowe’s and others.

“I think that’s fair,” he said during his presentation in Austin.

To calculate the weight, he relied on his best guess of average box size and weight, based on his industry experience. Using those numbers, he calculated each TEU contained an average of 1,742 pounds of corrugated material. He rounded down to 1,500 pounds to err on the conservative side.

“This is a much different number than the AF&PA wants to tell you about, because it’s not quite as rosy,” Fox said on stage.

In a statement to Resource Recycling, the AF&PA stood by its methodology.

“The OCC statistics presented at the 2022 Resource Recycling Conference do not paint an accurate picture of our national OCC recycling rate,” noted Brian Hawkinson, AF&PA’s executive director of recovered fiber. “The estimate [presented at the event] does not account for boxes used to export products from the United States and makes assumptions about imports of packaged products.

“AF&PA is a fact-based, data-driven organization,” the statement continued. “The statistics and methodology used to calculate the United States’ annual paper and OCC recycling rates are consistent with those used by major U.S. trading partners, such as the European Union and Japan, and is similar to the recycling rate published by the U.S. Environmental Protection Agency.” 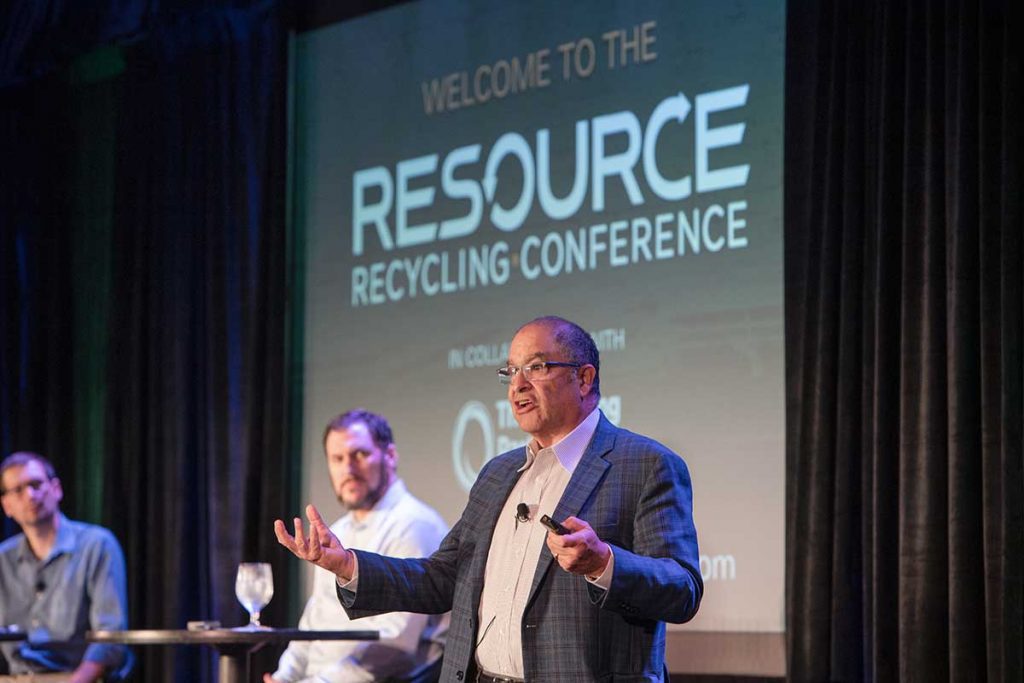 Cohen, the second speaker in the session in Austin, previously served as recycling division president for packaging producers Pratt Industries and Sonoco Products; in those roles, he oversaw networks of MRFs.

Cohen cautioned that his numbers are estimates only, but they’re the product of months of collecting OCC tonnage data.

“I think our numbers are pretty damn good because they’re underpinned with a lot of granular data,” he said in Austin.

He said his calculations supported the AF&PA’s estimate that 35.5 million tons of OCC were collected for recycling last year.

However, he provided new details about where exactly the fiber is being generated. For example, his research showed that for all the talk about how the rise of e-commerce – accelerated by the pandemic – has shifted cardboard from retail settings to residential doorsteps, the vast majority of OCC generated and recycled still comes from commercial and institutional settings. Of all the OCC recycled in the U.S. in 2021, he said, about 92% came from commercial/industrial sources and approximately 8% came from homes.

“That kind of blew my mind when we did this analysis, but again we have very granular data,” Cohen said from the stage.

The following chart shows Cohen’s estimates of OCC generation in the U.S. in 2021 (story continues below chart).

Cohen also illustrated the ease of collecting clean cardboard from business settings, as opposed to curbs. He estimated the average big box/supermarket store generates about 14,800 pounds of OCC per week. By comparison, the average household sets out about 1 pound of OCC a week.

Relying on the newly developed denominator, Cohen and Fox estimated that about 15.9 million tons were not collected for recycling in 2021. They said the vast majority of that weight was landfilled or burned at waste-to-energy plants, although they acknowledged some could be hoarded in homes, used to store items in basements or attics, or used as kindling in fires.

Cohen also said he and Fox conservatively estimated OCC waste landfilled or burned at 16 million tons, but it could be closer to 20 million-24 million tons.

“The silver lining in this whole thing is a lower recycling rate ensuring we’re not complacent. We still have a lot of work to do,” Cohen said on stage. “A lot of noise and effort at this conference and all conferences being directed at plastics, but paper is the bread and butter of recycling, both commercial/industrial and residential, and we have a lot of work to do.”

This story was updated to include the response from the American Forest & Paper Association.