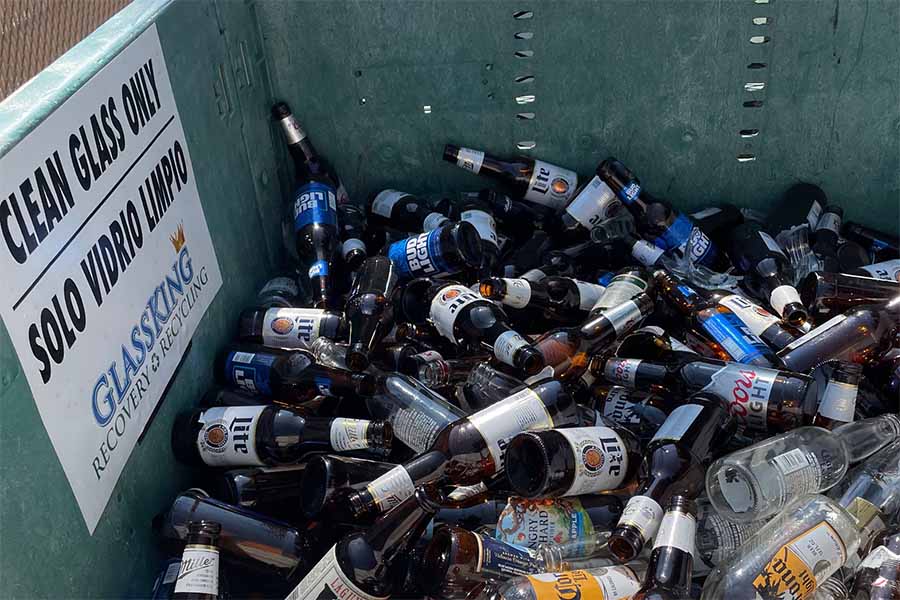 A group organized by the Glass Packaging Institute has brought glass recycling service to restaurants and bars in the Chicago area. | Courtesy of GPI

A 2021 commercial glass recycling pilot program in the Chicago area has taken off again, and this time it has signed up double the number of restaurants and bars.

Organized by the Glass Packaging Institute (GPI), the program collects and recycles glass bottles from restaurants and bars in the Chicagoland area. GPI anticipates the Don’t Trash Glass program will collect an average of about 20-plus tons per week, once 50 collection bins are deployed.

In an interview with Resource Recycling, GPI President Scott DeFife said the effort started as a pilot project last summer. It launched in late May with the intention that it will remain a permanent service.

“At the end of the pilot, virtually all of the restaurants that had participated said they would sign up again and that they understood the financial benefit of collecting glass separately,” DeFife noted.

When exploring how to recover some of the ample quantities of glass generated by the metropolis’ restaurants and bars, GPI studied several commercial glass collection efforts elsewhere, he said. Those included the first such program, by a Strategic Materials subsidiary in North Carolina called BevCon, as well as programs by Haulin’ Glass in Atlanta, Repeat Glass in Cleveland and GlassKing in Phoenix.

A couple of those companies were partners in GPI’s Chicago pilot project and have signed on for the latest launch: Strategic Materials, which sorts and cleans cullet for use by manufacturers, and GlassKing, which collects glass.

A collection truck, forklift and containers were leased and purchased for the pilot project, and a driver was hired, DeFife said. The truck collected glass from containers at about 24 bars/restaurants over the course of the project.

The service was free to participating bars/restaurants, which each generated about a half a ton of material a week, he said. Before the project, some of the bars had been putting glass in the commingled recyclables stream but most was sending glass into the waste stream.

GlassKing collected the glass from restaurants/bars and brought it to a bunker at an LRS transfer station. When about 25 tons was collected, a larger truck hauled it to Strategic Materials, which sorted and marketed the material.

DeFife said the collection strategy worked well. Each establishment was given a smaller container to store glass inside, and when they were full, the restaurant/bar staff emptied the glass into a larger container – essentially the size of a dumpster – outside. In only one or two instances did the establishment lack the physical space for the larger container, he said.

It took some time for the restaurant/bar employees to get into the routine of recycling glass, but once they did, the volumes being recycled increased, DeFife said.

“A, they felt good about recycling the glass that they know is recyclable,” DeFife said of the employees. “And No. 2, there was no breakage in the garbage, so it was safer.”

Distance between generators and the aggregation location did prove a constraint on the project, he noted. The pilot project collected glass from restaurants/bars largely on the south side of the city in 2021, near the LRC transfer station, which meant that some interested establishments further north had to be turned away.

In general, the participating restaurants/bars fell into two categories, DeFife said: Those wanting to recycle regardless of the amount of glass they generated, and those that wanted glass recycling service to greatly reduce their waste bill.

Now with about 50 participating restaurants/bars, the Don’t Trash Glass program launched Monday, May 23, DeFife said. The hope is to expand it to 100 or more establishments over the course of this summer.

This time, GPI isn’t calling it a “pilot.” The Glass Recycling Foundation may decide to provide more funding – and GPI is prepared to run the program for six months – but if enough restaurants/bars subscribe for service it will pay for itself and become permanent, he said.

Modeled after GlassKing’s Phoenix program, the Chicagoland service will charge restaurants/bars up to about $200 a month for collection service, depending on volume (the charges are less in Phoenix, but GlassKing’s costs are higher in Chicago). Most of the companies that participated in the pilot project say they’re ready to subscribe and are willing to pay for the service, but because of additional sponsorship support for the project, GPI doesn’t believe they’ll need to be charged the full rate just yet, DeFife said.

The good news is the existing truck and forklift allow Don’t Trash Glass to service up to 300 accounts, he said.

There is at least one significant difference from the 2022 iteration: The partners found a glass aggregation space at a sand and gravel company in Antioch, Ill., north of Chicago and on the Wisconsin border. The material will go from there to a Strategic Materials facility in Delavan, Wis. DeFife noted they’re also looking for a second aggregation site on the southside.

The northern locations mean Don’t Trash Glass will now be able to efficiently serve restaurants/bars and entertainment venues north of Chicago and along the Lake Michigan lakefront.