‘The highest form of recycling’

Sit in the parking area of Urban Ore in Berkeley, Calif. and you will see one set of people dropping off (or sometimes selling) old items – and another set of satisfied customers hauling away their bargains.

The scene demonstrates how material reuse through for-profit and nonprofit operations is a mechanism for the redistribution of material wealth. The businesses also have a positive impact on job creation, community development and the environment.

“Reuse is the highest form of recycling because finished products are revived and their productive purpose is extended,” said Dan Knapp, who founded Urban Ore in 1980 and continues to helm the operation.

The last several years have been pivotal for Urban Ore and other retail outlets that focus on reuse of items such as building supplies, appliances, furniture, home goods, computers and more. COVID-19 initially slowed reuse enterprises, but many rebounded dramatically and some rose incredibly quickly into record-revenue territory.

Other operators around the U.S. have noted similar surges, a trend that is helping to underscore the critical role of the reuse sector, especially at a time when supply chains and other foundations of the economy are uncertain.

Reuse stores were generally deemed essential businesses after COVID-19 took hold in the spring of 2020. And operators that pivoted to the new reality of social distancing and masking were suddenly flooded with seemingly endless truckloads of items from household and business cleanouts.

Sales, meanwhile, went up because demand skyrocketed for furniture, doors, windows, lumber and other materials needed to reconfigure living and working spaces.

In Ithaca, N.Y., Finger Lakes ReUse experienced a “supply chain explosion” that drove 2021 sales to $2 million, a 37% increase over 2019 sales, according to Diane Cohen, the organization’s executive director. Employment grew from 50 to 80 workers, and the company paid $160,000 in sales tax. 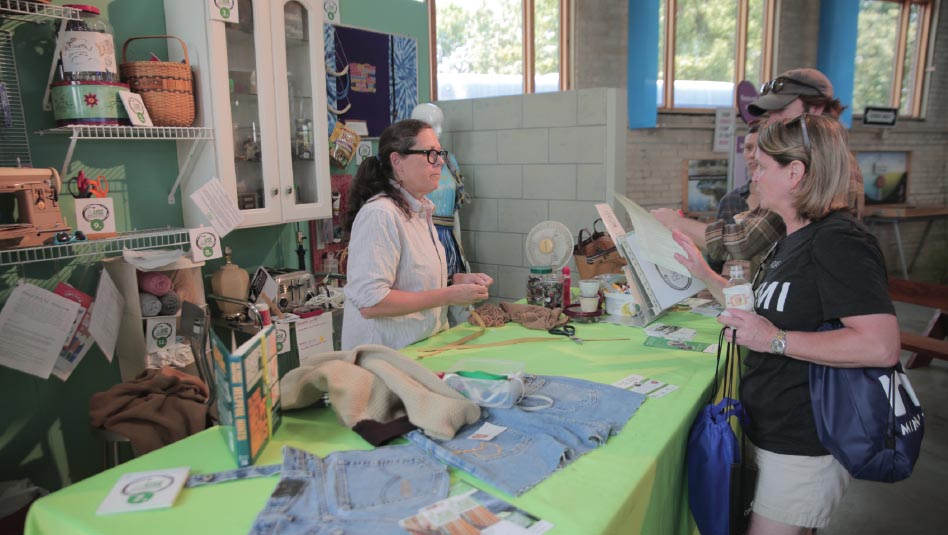 Nancy Ford, owner of Minneapolis retailer Repair Lair and board member for Reuse Minnesota, promotes the benefits of reuse at the Minnesota State Fair in 2017.

At Community Forklift in Hyattsville, Md., the pandemic spurred a tumultuous period that ultimately led to a refined business model.

The organization, which focuses on salvaged building materials in the Washington, D.C. metro area, had experienced consistent growth from 2017 to 2019. In fact, the company had its best year ever in 2019. “We got out of debt for the first time in our history,” noted Nancy Meyer, CEO and COO of Community Forklift.

But 2020 saw deep cutbacks amid the pandemic. The company laid off 35 workers, but recalled them in 2021. Changes and technology helped fuel the rebound. The company started taking in more valuable donations, including antiques in a joint project with local antique dealers.

“We are reaching new markets that allow us to stay focused on our jobs and wealth redistribution,” said Meyer, “and end destructive disposal missions.”

When the company reopened after a brief COVID lockdown closure, its staff had dwindled from 42 to 18. Customer count was down proportionately, but soon business rose, and hiring became a constant. By January 2022, Urban Ore had more full-time employment hours than before COVID hit.

The business growth also allowed the company to pay cash for a $250,000 solar array on the roof of the main building’s roof. After the solar project went live in October 2021, Urban Ore’s electric bill dropped from $2400 per month to $25 per month. At this rate, the solar array should pay for itself in less than five years.

Construction Junction in Pittsburgh initially suffered in 2020. The facility was closed for two months – Pennsylvania ruled that home improvement stores were essential businesses but thrift stores with donated materials were not – and sales fell by 70%. But 2021 saw a rebound to 2019 levels of operations. Director Mike Gable foresees continued growth, thanks in part to eBay sales and Construction Junction’s online direct sales.

As reuse-focused retailers grow in today’s reshaped commercial landscape, they are helping to bolster the cities and towns around them in different ways.

Second Chance, a building deconstruction and resale operation in Baltimore, now has 200 employees in takedown crews, sales jobs and warehouse positions, helping it serve the entire Mid-Atlantic region and into Ohio.

Its downtown Baltimore facility, a former city warehouse in a 300,000-square-foot space, employs local residents under arrangements with city agencies. Any recruit that satisfactorily completes weeks of training is guaranteed a full-time job. And the organization has an annual goal of finding better jobs for 20% of its workers, enabling managers to recruit and train additional workers.

“We are actually recycling people as well as building materials,” said Mark Foster, the president and founder of Second Chance.

On the other side of the country, Saint Vincent De Paul in Lane County, Ore. employs close to 1,000 workers in repair, sales and trucking operations. Its repair and resale operations include appliances, mattresses, furniture, automobiles, textiles, books and more.

In the Midwest, an organization called Reuse Minnesota works to coordinate and promote reuse-focused businesses, and the group has set out ambitious program goals for the next few years.

Emily Barker was recently named the first executive director of Reuse Minnesota. She has been on the job for about six months and said she is excited about the entire scope of work for the immediate future.

“I am especially enthusiastic about the potential for peer-to-peer exchanges with businesses helping each other,” Barker noted, “and existing businesses helping startups learn about inventory management, social marketing, co-locating with like businesses and new product lines.”

Barker will draw on a $335,000 grant from the Minnesota Environment and Natural Resources Trust Fund to implement an expanded role for Reuse Minnesota. The grant will support outreach through webinars, round tables and educational sessions.

There are currently 55 member organizations in Reuse Minnesota. About half of the members are operating diverse reuse companies, including recycling facility operator Eureka Recycling and other entities such as Tech Fixers, Twin Cities Habitat for Humanity ReStore, Old School by Steeple People (thrift store), and Rethos: Places Reimagined. Several other members are cities and counties that are working to expand reuse as part of their solid waste plans and to address climate change.

Reuse Minnesota has calculated the impressive cumulative environmental, economic and social impacts of reuse in that state. This includes avoidance of over 2.7 million metric tons of CO2-equivalent emissions per year and reduction of over 67 billion gallons of freshwater each year from ground or surface water sources.

On the economic side, the organization calculates that the reuse economy generates about $5.8 billion each year statewide ($1,035 per capita), the 10,631 reuse businesses make up 7% of all statewide businesses, and the reuse sector accounts for over 55,000 jobs.

Clearly, reuse operations are flexible and are learning to pivot to meet the demands of each market served.

These businesses allow much-needed supplies and products to be available at affordable prices for low-income residents as well as builders and others in need of material. Each reuse enterprise also builds a vibrant community of donors and shoppers.

A common denominator across these enterprises is the large upside potential for revenue and growth. “It is limited only by our own capacity to accept materials and get them on our shelves,” said Cohen of FInger Lakes ReUse. “We are demonstrating that there is still enormous additional potential in both supply and demand.”

Neil Seldman runs the Waste to Wealth Initiative at Washington, D.C-based Institute for Local Self-Reliance. He can be contacted at [email protected]