With an organics diversion mandate coming into effect this month in California (see page 8), plenty of compost infrastructure projects are in development in the Golden State. But one organics processing site that recently came on-line in the San Diego area adds an extra element: solar energy.

Republic Services’ Otay Compost Facility in Chula Vista, Calif. opened in the fall of 2021, and the company has been working to scale it up to its 200 tons per day processing capacity (that equates to 60,000 tons per year). The operation is located on the site of an existing Republic Services landfill and uses a covered aerated static pile (ASP) technology, a method in which air is forced through the material to speed up the compost process and minimize emissions and odors.

Because Republic Services wanted to provide a state-of-the art facility to help Chula Vista reach its climate action goals and needed the flexibility to move the compost operation to another section of the landfill property in the future, the company worked to develop a solar-based system to power the aeration blowers and other electric equipment on-site. It’s the first solar-powered compost operation to open in California. 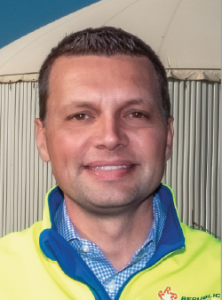 They discussed the details of the facility, the legislation that has pushed organics collection forward in California, and the multi-stakeholder collaboration that is key to success when building innovative organics or recycling processing operations.

Resource Recycling: What led to the decision to build this facility?

Chris Seney: Senate Bill 1383 is the driver in California. It requires every jurisdiction in the state to provide organics collection service to residents as well as most businesses in the state. That regulation was adopted in 2016, and so over the last five years, we’ve been working toward solutions for all our partner cities and jurisdictions. (Editor’s note: the law went into effect Jan. 1, 2022.) Chula Vista is very supportive of organics diversion, and they wanted a solution. Residents already were putting [yard debris] in a bin and SB 1383 requires food waste to go in that bin with the green waste. That requires a very different type of compost facility and a higher-tiered permit facility.

Vidhya Viswanathan: SB 1383 sets a number of diversion goals, and one of the milestones is by 2025 to have 75% diversion of organic material. At SCS our mission is to adopt our clients’ environmental challenges as our own and also to promote a sustainable environment through innovation and creative application of technology. This project encompasses all of that.

Can you run through the processing steps used at the site?

Seney: Material comes in and is tipped at the facility, and we remove contamination. We then run it through a large horizontal grinder that sizes it down to a 4-inch-minus product. We add water and bring it up to 50% to 60% moisture. And then we start the compost process. That feedstock goes into one of the bunkers on the site, each of which is approximately 100 feet long, 26 feet wide and 11 feet tall. We build the heap, put it on the aeration pipes and put a Gore cover on it. This heap sits in phase one for four weeks, and then we remove the cover and move the pile to phase two, where it sits on air again with the cover back on it for two more weeks. That’s the fifth and sixth weeks of the process. Then it gets moved one last time for phase three, where there is no cover. At that point, we are trying to make a mature product and really blow out moisture so we can screen it. 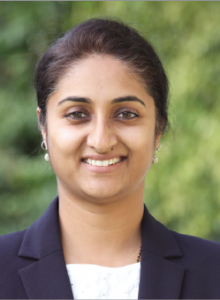 Can you talk more about the purpose of the cover?

Seney: The Gore technology is based on positive aeration in combination with the Gore covers. The covers are waterproof and breathable, similar to that of Gore-Tex fabrics used for outerwear and footwear. With the covers, you can stand on these piles and smell next to nothing, even though you are standing on top of 1,000 cubic yards of fresh feedstock. The cover doesn’t let emissions out and it doesn’t let water in. It’s a controlled environment that speeds up the process. Gore has around 300 installations across the world so it is definitely a proven technology.

And then how does solar fit into it all?

Seney: We have approximately 7,400 square feet of solar panels –144 PV panels that have 43 kilowatts of ability to absorb solar. That energy is put into about 3,200 pounds of batteries that are in a large container on the site. We have about 573 kilowatts of battery storage. The beautiful San Diego sun hits the panel, the energy moves into batteries and then from batteries it goes through inverters, and we’re able to power the entire facility on solar. We’re powering the 16 blowers that move air into the heaps, the office equipment and office air conditioning, as well as the temperature probes and oxygen probes that control the system.

Vidhya, from an engineering perspective, how do you make a project like this happen?

Viswanathan: It takes a team. The leaders of the team are Republic Services, and we also partnered with a company called Sustainable Generation that provided the technology and the Gore covers. We had an electrical engineer on the team also. SCS did the grading of the site, and the layout of the facility. We do a substantial amount of landfill gas engineering – at the existing landfill on this project, there were elements of the gas system that needed to be modified to accommodate the construction of this facility. On the solar element, it was our job to work with operations as well as electrical engineers to figure out a layout that would work – for instance, where to place the solar so the panels were not facing the wrong direction and you’re able to harvest the sun. We also coordinated with the electrical team to lay out the conduits in a way where the system doesn’t impede the traffic flow of day-to-day operations.

What markets will most of the compost produced at this site move into?

Seney: One of the largest customers will be the jurisdictions themselves. Part of SB 1383, article 12, is that jurisdictions have to procure organic products. This facility will be able to sell compost and mulches back to the local jurisdictions, such as Chula Vista, so it helps them on both ends in regard to SB 1383. For Chula Vista, if they choose to procure only compost [and no mulch], they’d be required to procure around 11,000 or 12,000 tons per year of compost. That’s a lot of compost. And we’re going to be there to provide it to our partners. At this facility, some products will also be sold to landscapers and local agriculture operators. There aren’t a lot of existing options for composters and mulch, especially in the San Diego region.

Viswanathan: What SB 1383 has done is it has highlighted the lack of such facilities. We’ve seen an increase in counties, municipalities and private entities reaching out for feasibility studies as well as support in designing and construction. 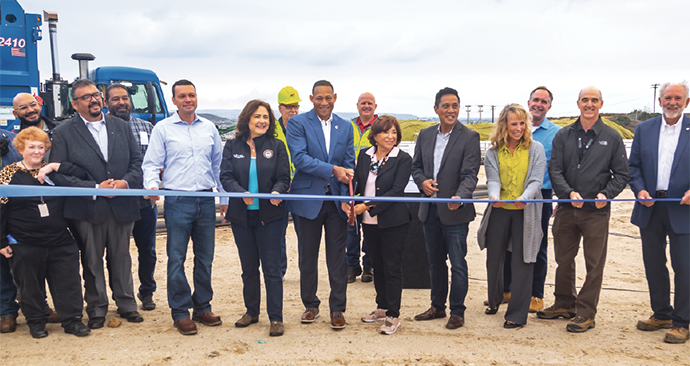 Leaders from the city of Chula Vista, Republic Services and other partners held a ceremony to officially open the Otay site on Oct. 6, 2021.

What role has the local municipality played in pushing this facility forward?

Seney: We’re the franchised hauler for the city of Chula Vista and have been for some time. So we’re contracted as the sole hauler to pick up not just trash and recycling but now to recycle food waste and green waste in the organics bin as well. This project was heavily dependent on the city being supportive and really wanting to go down this path of sustainability and composting and SB 1383 compliance with us. It would have never come to fruition without their support. They are very excited about the project, just as we are.

How do you see the organics diversion landscape continuing to evolve in the coming years in California and elsewhere?

Seney: This facility primarily solves for residential green waste mixed with food waste, but SB 1383 also requires every restaurant, hotel, grocery store and so on to have food waste collection too. There’s even more contamination in that stream, which makes it more difficult and more expensive to recycle. Recently, we opened our third organics pre-processing operation in California. For those sites, we collect commercial food waste, remove contamination and then pre-process material before transporting it to anaerobic digestion or wastewater treatment, which generates renewable energy. We have one pre-processing site in Sacramento that just opened, and then one in the Bay Area and one in Anaheim. For years, we’ve been working on this and it will probably be a big part of my job for the next five to ten years in California. It’s only a matter of time until other states start to go down a similar path.

Viswanathan: Due credit has to be given to entities like Republic Services because they are taking big steps. We’re here to support them, but at the end of the day it’s their commitment to the environment, regulation or no regulation.