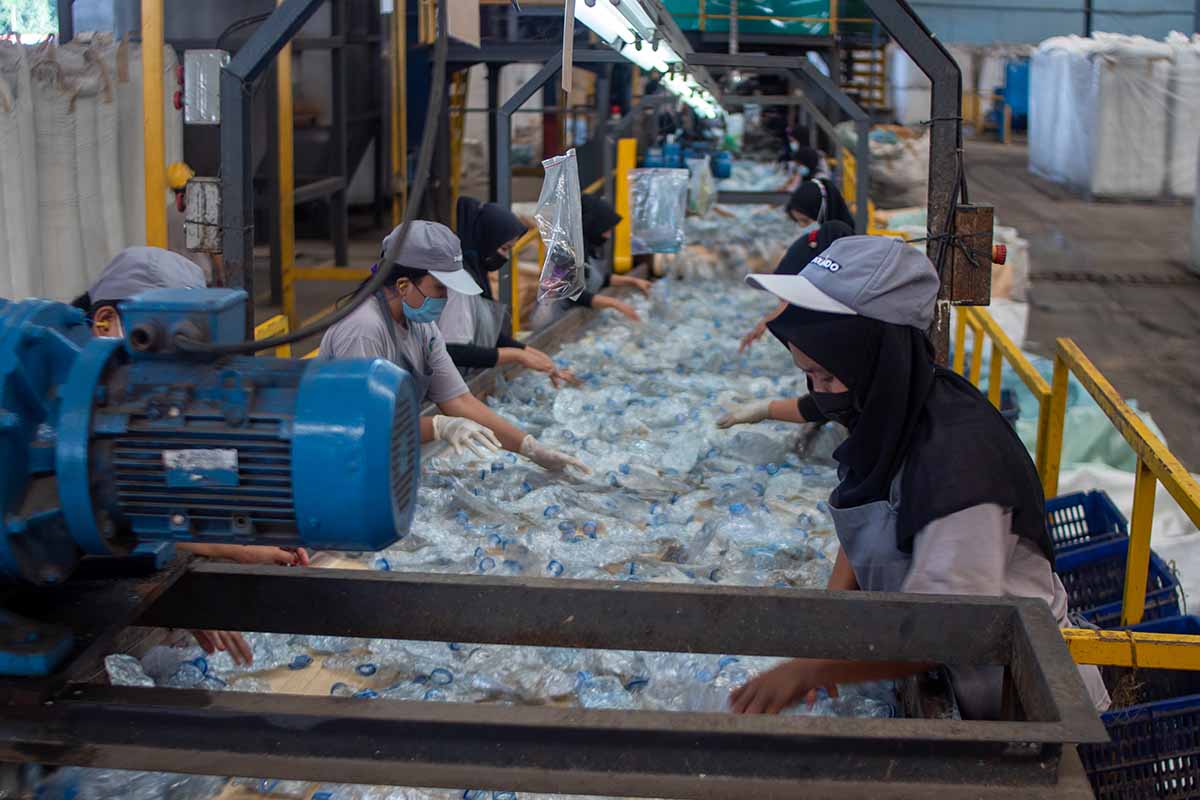 A partnership involving Circulate Capital, Bantam Materials and an Indonesian processor will help to recover PET from remote areas of the Asian nation and deliver it to grocery store shelves in Europe and America.

The money from Singapore-based Circulate Capital, which aims to prevent ocean plastics, will allow Prevented Ocean Plastic Southeast Asia to build collection and aggregation centers on far-flung islands that lack drinking water and formal waste management systems, so the company can begin recovering PET bottles that would otherwise be burned or wash into the sea.

The amount of material that will be recovered is estimated to be substantial: 400,000 metric tons (over 880 million pounds) over a decade. Since Bantam Materials started marketing the recycled plastic in fall 2019, it has shipped nearly 30,000 tons of Prevented Ocean Plastic.

“We don’t believe in this habit that the sustainable business community has to some extent of announcing big but doing very little,” Vytas Gruodis, director of Bantam Materials (North America), told Resource Recycling. “We wanted to go from ‘say a lot and do very little’ to basically ‘do a lot and say the correct amount.'”

Indonesia’s most populated island – and home to its largest city, Jakarta – is Java. But the Indonesian archipelago includes over 17,000 islands, and about 45% of the population lives outside of Java.

Polindo and Bantam already funded a collection center on the island of Bali. Polindo is the largest PET bottle reclaimer in the country.

Circulate Capital’s money will allow Prevented Ocean Plastic Southeast Asia to build 12 collection centers and three aggregations centers, with particular emphasis on Kalimantan, which is the Indonesian side of Borneo, and on the island of Sulawesi. The partners didn’t disclose the amount of the investment, which will come in the form of an interest-bearing loan that will be paid out in three installments, with each amount paid back within seven to eight years of its disbursement.

Raffi Schieir, director of Bantam Materials (Europe), said the investment is the product of about two years of negotiation. He said the first three new facilities may come on-line by the end of this year, and they hope to have the majority of them functioning within five to seven years.

“This partnership will enable us to develop waste collection infrastructure to meet the growing demand for traceable plastic while also supporting in need communities outside of Java,” Polindo CEO Daniel Law stated in a press release. “We believe there is an opportunity to overcome and optimize the complex collection and sorting logistics in remote areas of Indonesia, and in doing so, deliver better income opportunities and incentive models that help mobilize informal waste collection and reduce the plastic that enters the ocean.” 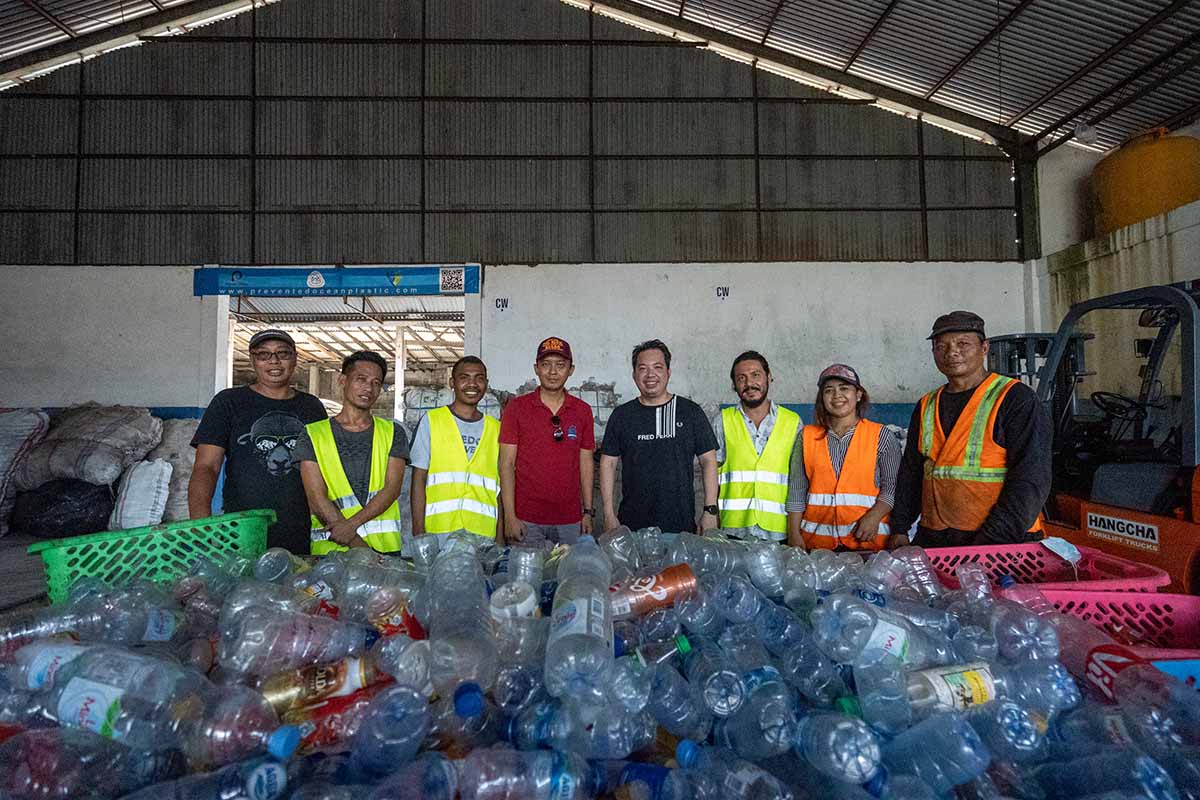 Workers at a collection center built by Polindo and Bantam Materials in Bali.

Moving material around the world

PET bottles collected, aggregated and baled at the new facilities will be shipped to Polindo’s processing facility in Jakarta, where they’ll be converted to flake and pellets, Gruodis said. Then Bantam Materials will sell and ship the flake to processors around the world.

Bantam Materials already supplies its “Prevented Ocean Plastic” brand RPET to companies internationally, including the U.S. ZenWTR bottled water brand, which uses it to make 100% RPET bottles. The RPET, which is usually shipped by Bantam in the form of hot washed flakes, is also used in packaging for over 100 products on shelves in a number of European supermarket chains. Most of the Prevented Ocean Plastic brand is PET, but smaller volumes of recycled HDPE and PP are also available.

“The key to all of this is that we are seeking to demonstrate that you can have a profitable for-profit, economically driven business that has a huge social and environmental benefit across the globe, and that you can have those two things exist at the same time,” Gruodis said.

Schieir said pricing for Prevented Ocean Plastic, which is audited and certified, is “connected to a market-based parameter and is not outlandish.”

Gruodis explained that, before China’s National Sword campaign, Bantam Materials’ primary focus was on recovered scrap plastic from Latin America. That was because Southeast Asian reclaimers were primarily selling their flakes to Chinese manufacturers. But National Sword has made it extremely difficult to ship flakes into China, so Southeast Asian companies have shifted their downstream focus to North America and Europe.

The Prevented Ocean Plastic Southeast Asia expansion project is starting with PET, but Gruodis noted he’s working on a plan to incentivize collectors to bring in low-value plastics, including flexible, multilayer packaging, as well. Such packaging is really the bane of the environment in many countries, he said.

A version of this story appeared in Plastics Recycling Update on January 19.