As the recycling sector continues to position itself as an important component of efforts to reduce greenhouse gas emissions within communities, stakeholders should understand details on the levels of methane-rich landfill gas created from landfilled waste. What happens to that methane and what systems are in place to minimize its leakage into the atmosphere?

The vast majority of municipal solid waste (MSW) generated in the U.S. is destined for landfills, and most of that material is managed by a limited number of large sites. In 2019, half (181 million tons) went to 139 landfills while the other half landed in another 1,078 landfills.

The primary mechanism for collecting and minimizing the emission of methane from a landfill is a gas recovery system, which consists of vertically or horizontally piped wells. Since virtually every large landfill has a gas capture system in place, including all facilities containing more than 20 million tons of material, 92% of all MSW that goes to landfills is covered by landfill gas capture systems. Collection efficiency for these systems can vary widely due to many factors, including landfill cap integrity and operational conditions. The U.S. EPA assumes an average collection efficiency of 75%.

At the same time, existing regulations do not incentivize denser well placement or require piping for small landfills. On a facility-by-facility basis, only slightly over half of active U.S. landfills have gas recovery systems. The smallest landfills that report emissions, including 229 of 751 receiving up to 500,00 tons per year, do not have recovery systems. This means that, on average, a ton of waste sent to smaller landfills will have greater climate impact than a ton sent to larger landfills.

The graphic breaks out active U.S. landfills into size tiers based on annual incoming MSW quantities, differentiating those with and without gas recovery systems. The graphic overlays the average emissions per ton of incoming waste for each size tier. The 221 smallest landfills (those receiving between 1,000 and 100,000 tons of MSW per year) averaged reported emissions of 1.39 metric tons of CO2 equivalent per ton of waste received. 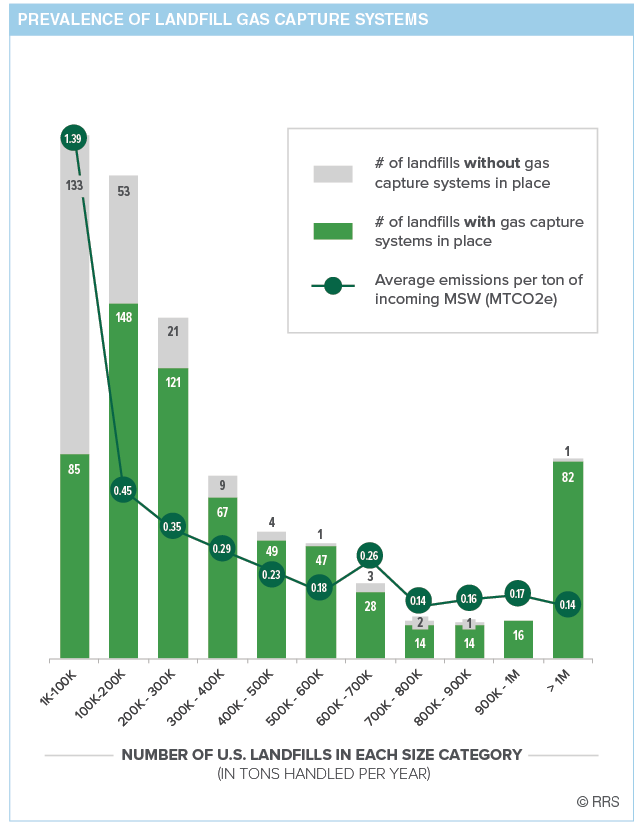 This month’s Data Corner was produced by RRS. Learn more at recycle.com.