Starting in 2017, solid waste and recycling managers for multiple municipalities in the North Central Texas region recognized substantial challenges facing their recycling programs. At the time, there was significant uncertainty regarding the future of recycling economics as China announced new import policies banning shipments of certain materials and imposing contamination limits.

Before developing any responses to the global shakeup, municipalities in the region needed to work together to solve their own problem with recycling contamination and the corresponding need to educate residents. In the Dallas-Fort Worth metroplex, which comprises 16 counties and nearly 7.5 million people, that was no easy task. These communities had to develop a clear solution or risk further challenges with recycling programs already hampered by rising costs due to China’s National Sword policy.

Here’s a look at how the regional strategy came together.

Several municipalities in the metroplex identified struggles that included negotiating with recycling processors that had requested rate increases, as well as limited ability to educate residents due to constrained budgets and outreach dollars at the municipal level. Another major barrier was the inconsistency regarding material acceptance at different materials recovery facilities (MRFs) across North Central Texas.

The North Central Texas Council of Governments (NCTCOG), a regional planning agency, and NCTCOG’s solid waste advisory committee, the Resource Conservation Council, developed a strategy to create a data-driven public education and outreach program to increase recycling participation and decrease contamination. The objective was to improve communication around recycling information so that residents would recycle more and generate higher-quality materials for MRFs.

Traditionally, NCTCOG has received grant funding from the state of Texas via the Texas Commission on Environmental Quality (TCEQ). In the past, NCTCOG has allocated the funding from TCEQ to a combination of regional and municipal grants. For the 2018-2019 fiscal year grant cycle, NCTCOG decided to distribute some of these dollars to the regional recycling education and outreach program to highlight the challenges and develop long-term solutions.

As part of the campaign development, NCTCOG worked with consultancy Burns & McDonnell and The Recycling Partnership, a nonprofit recycling organization backed by brands and other stakeholders, to collect and evaluate the data necessary to solve the region’s unique challenges. Additionally, the team worked to build a plan to reach residents through a multifaceted marketing push. 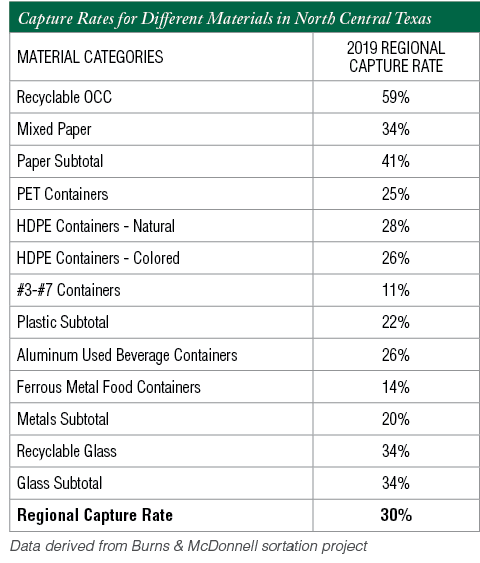 “The main objective of this campaign was to identify and measure what materials were being placed in the residential carts to better understand the specific nature of building a regional education campaign,” said Robert Smouse, assistant director of the Fort Worth Code Compliance (waste and recycling are part of the Code Compliance department in Fort Worth). “Burns & McDonnell and The Recycling Partnership have been instrumental in this project, providing technical knowledge of the waste stream and resource recovery and in developing public education campaigns.”

An initial step in developing the campaign was conducting a waste characterization study, which consisted of the physical sorting of refuse and recycling material to evaluate the regional capture rate of recyclable materials.

Capture rates indicate the weight of recyclable materials that are being collected and sold compared with the total amount of recyclables in the waste and recycling streams combined. For instance, a household’s annual recycling might be 400 pounds, but it might incorrectly place another 400 pounds annually in the garbage. In this case, the household’s total generation of recyclables would be 800 pounds but because only 400 pounds make it to the cart, the capture rate is 50%. This number helps to determine the opportunities for program improvement.

The data team elected to determine a capture rate for key materials rather than calculate a more traditional recycling rate metric (weight of material collected for recycling divided by weight of all waste collected). The intent was to evaluate more granular data to generate an impactful education and outreach recycling campaign for communities across North Central Texas.

In the fall of both 2019 and 2020, at the direction of NCTCOG’s Resource Conservation Council, Burns & McDonnell conducted sorting efforts, sorting both refuse and recycling material to evaluate the ongoing impacts of the campaign. Each sorting event evaluated approximately 10,000 pounds of refuse and 5,000 pounds of recycling from single-family homes in the North Central Texas region. Both sorting events sourced samples from a representative collection of programs, including cart-based collection and bag-based collection, as well as a variety of demographics to account for municipalities of all sizes in the region.

Data and analysis from both sorting exercises provided a comprehensive understanding of the composition profiles of refuse and recycling as well as the capture rate of recyclable material. The table to the right shows the results from the 2019 sorting event.

The study revealed that nearly $122 million worth of recyclable materials are sent to the landfill annually. Given constrained municipal budgets and MRF operator financial goals, it is critical these valuable materials are captured as part of the region’s collective recycling programs. Ultimately, residential households will pay through service fees for the costly cleanup at MRFs, making recycling improvement a community priority.

The processor side of the equation

Improving the capture of valuable recyclable materials and decreasing trash in the recycling system can also help reduce the effort and financial burden MRFs face with processing recyclables.

The quality of segregated and baled material sold on the secondary materials market will also increase, providing more profit and savings for MRFs. A “win-win” partnership between MRF operators and municipal customers is essential for a cost-efficient and reliable community recycling program.

To help move forward on overall recycling system enhancements, Burns & McDonnell conducted interviews and surveys with MRFs in the North Central Texas region. These key stakeholders were brought together to determine critical communication directives to reinforce uniform recycling efforts that minimize confusion among residents from different communities. A uniform list of top issues challenging the MRFs was developed.

Project leaders also determined the recyclable materials most often accepted by processors. This includes: aluminum and steel cans, corrugated boxes, food and beverage cartons, glass bottles and jars, junk mail, and plastic bottles used in bath, kitchen and laundry settings. This list was not mandatory for programs to adopt. Rather, it provided information about the recyclable materials that are commonly accepted among the MRFs located in the region.

In addition, the interviews revealed the items that are not accepted because they are dangerous or damage equipment. The most common recurring and detrimental items to MRF operations include:

The next step of the campaign was producing messaging materials that could be customized by communities within the region to help residents know what is recyclable, specific to a community’s needs. The mailer above, created by The Recycling Partnership, is an example of the customizable template provided to communities to communicate recycling information. 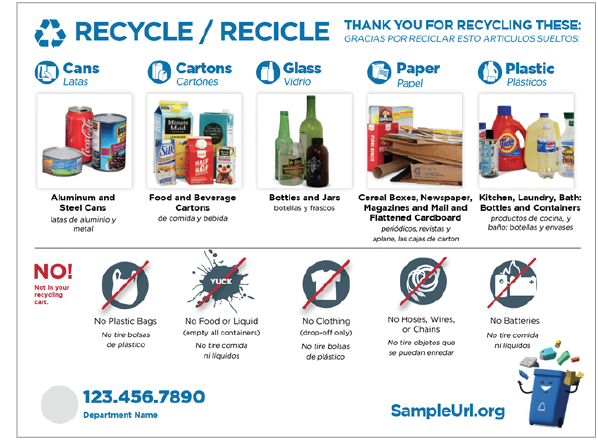 A customizable template provided to communities in North Central Texas to help on resident outreach efforts.

‘A suite of consistent messaging’

In June 2019, the “Know What to Throw” public engagement campaign was launched by NCTCOG, using messaging developed by The Recycling Partnership to provide education on recycling best practices.

“A lack of confidence can undermine good recycling habits,” said Elizabeth Schussler, senior director of social change, behavior and impact for The Recycling Partnership. “Our national research shows, for example, many do not understand the challenges associated with processing plastic bags at MRFs. This campaign offered communities a suite of consistent messaging so they could each tackle their most common issues.”

A website – timetorecycle.com – was used as the launchpad for messaging and as a touch point for residents to see information in a consistent way. Increased public engagement and knowledge-sharing throughout every stage of the recycling process helped local efforts become more deliberate and effective to increase participation and decrease contamination within the recycling stream.

The ongoing campaign is intended to achieve consistency across local recycling program guidelines and align education and outreach to have recycling messaging retain the same look and feel wherever residents live, work and play (whether that is in one municipality or many). Additionally, the campaign plan is to foster the attitude that recycling is “worth it” among the communities in North Central Texas.

Municipalities have been able to implement the assets to amplify the regional best practices as well as produce related content to communicate guidelines. The initial campaign effort provided material for digital, social, print, radio, and movie theater marketing, along with in-home communication templates. Metrics – including engagement, reach and interaction – regarding the deployment of campaign assets are analyzed by the NCTCOG to support the ongoing needs of the campaign.

During the initial deployment of the campaign, the Time to Recycle website traffic increased by 825%. Nearly 3.5 million regional residents saw Google ads directing to the website, and nearly 1 million residents in the region saw a campaign advertisement in their social media feeds. Ads were displayed on 341 screens in 25 local movie theaters. 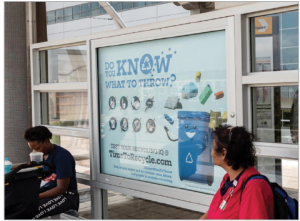 The “Know What to Throw” campaign delivers consistent messaging across multiple communities in the Dallas-Fort Worth metroplex.

Although the initial and sustained campaign effort was made possible by TCEQ grant funding, the regional effort was accomplished through collaboration with The Recycling Partnership and the American Beverage Association’s “Every Bottle Back” initiative. This partnership allowed existing TCEQ funding to be leveraged to support further campaign outreach in the North Central Texas region over a three-month period.

The ongoing regional campaign coordinates outreach among NCTCOG member municipalities and provides outreach content for communities to incorporate as part of their local efforts. These efforts leverage and coordinate digital media approaches that encourage municipality communication teams to post and engage with content in a coordinated fashion to deploy a uniform message.

The NCTCOG’s member communities continue to face budget challenges and encourage greater recycling participation. The sustained “Know What to Throw” campaign minimizes the effort required by municipalities in the region working toward the shared goal of improving recycling capture and minimizing contamination.

“Making continuous recycling education a priority for our communities is of the utmost importance to our organization,” said Alita Kane, community program coordinator for The Recycling Partnership. “The challenge is to keep after it by promoting outreach to residents and regularly identify the reasons behind recycling issues to keep building momentum toward people recycling more, better.”

Through this coordinated and sustained effort, the campaign is laying the groundwork to make significant improvements to the regional recycling system of North Central Texas by limiting contamination and improving recycling practices across communities, large and small.

Burns & McDonnell is committed to helping the NCTCOG member municipalities collaborate to identify and achieve their recycling goals while moving the needle on the regional capture rate. The idea is to achieve the long-term benefits of a robust, safe and cost-effective recycling system in North Central Texas.

Even with the extensive work completed to measure capture rates, develop educational and outreach content, and deploy coordinated messaging, there is still much to be done to improve the recycling system in North Central Texas. With the NCTCOG leading the path forward, it is up to member municipalities to utilize the campaign resources and continue working toward providing residents the knowledge that will provide a lasting positive impact on the regional recycling system.

Scott Pasternak is department manager at Burns & McDonnell and can be contacted at [email protected] Eric Weiss is a solid waste and recycling consultant at Burns & McDonnell. And Cassidy Campbell is senior planner at the North Central Texas Council of Governments.