The latest MRF builds and retrofits across the globe 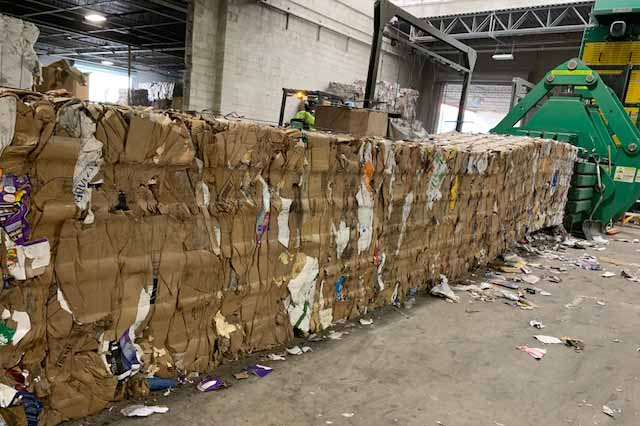 A recycling facility in West Babylon, N.Y. installed a large optical sorter that has increased OCC throughput and quality. | Courtesy of Van Dyk

The Great Northern Fibers facility in West Babylon, N.Y. installed a large optical sorter that has increased OCC throughput and quality, and the company is receiving higher prices for its material.

The facility installed a 2800 wide optical sorter from Van Dyk Recycling Solutions, according to a Feb. 22 press release. The decision was driven by a push to improve the facility’s OCC recovery.

“The system has an existing OCC screen to remove large cardboard, but a lot of small cardboard pieces were making it into the paper stream,” the Van Dyk release noted. “That small OCC was ending up either in residue or as part of a mixed paper grade that wasn’t as valuable as the sum of its parts.”

The new optical sorter is positively sorting OCC, ejecting it from the newsprint stream. Great Northern Fibers has noticed several positive results from the installation.

“By removing browns from the paper, the news grade is now clean enough to sell as news,” according to the release. “The browns captured by the optical sorter are blended back in with the OCC and baled.”

The optical sorter has replaced six manual sorting employees, according to the release, and it has increased processing tonnage and quality.

“The improved quality of the product produced has enabled us to get more money for the product, and also to find constant markets for it,” said Joe Fiorillo, general manager for the facility.

A $12 million retrofit in Canada

The city of Edmonton will spend 15.7 million Canadian dollars (about $12.4 million) to install optical sorters and other equipment, according to CBC News. The retrofit will lessen the 22-year-old facility’s reliance on manual sortation and increase diversion substantially, according to the article.

Edmonton has a goal to hit 90% diversion, according to CBC.

The Mt. Diablo Recycling Center in Pittsburg, Calif. is undergoing a retrofit that will boost its processing capacity by as much as 75%.

The facility announced in February it is installing a variety of sorting equipment from equipment supplier Bulk Handling Systems (BHS), including screens, optical sorters and the BHS Max-AI artificial intelligence sorting system.

The robotic Max-AI sorter will be placed at the end of the facility’s sorting line in the “last chance position,” according to BHS. The robot will work in tandem with a new optical sorter “to identify and remove non-fiber from the mixed paper product,” BHS added.

The Northern California hauler and facility operator says the retrofit will increase its facility’s throughput from 20 tons per hour to 35 tons per hour. The retrofit is slated for completion in the second quarter of 2021.

“We believe the future of recycling will rely heavily on using technology and data to optimize performance,” said Gary Lazdowski, chief operating officer of the California recycling facility. “Max-AI and NRT equipment throughout our system will deliver that for our operation.”

A MRF in Alfreton, England recently installed two optical sorters that will bolster the facility’s HDPE and PET quality and tonnage.

“The design brief was to increase the recovery and purity rates of HDPE and PET from the commingled plant with the flexible option to change over to additionally recover PP,” the consulting firm stated in a release.

The optical sorters have allowed the company to begin automatically sorting HDPE and PET, according to the release.

“This investment has enabled us to increase productivity and expand our recycling service to even more [local] customers,” said Dec Nortcliffe, national recycling manager for HW Martin, in the release.

A new facility with 14 robotic units

A new MRF is in development in Coventry, England, featuring numerous optical sorters and robots.

Equipment supplier Machinex recently announced it was selected as the preferred bidder to supply the MRF, which will have a processing capacity of up to 175,000 metric tons per year.

The Machinex facility design includes 14 SamurAI sorting robots and 14 optical sorters, including 13 MACH Hyspec optical units. This design will provide “what is certainly a highly automated and innovative state-of-the-art facility,” according to the release.

“It will also be one of, if not the first, facility in the world that integrates, at this scale, artificial intelligence at the core of its system, allowing real-time interconnectivity between the main sorting equipment,” Machinex added.

The facilities are slated to get new insulating and heating in their shared warehouse, added LED lighting, material storage capacity and public restrooms, according to the Daily Camera newspaper.

Eco-Cycle Director Suzanne Jones told the newspaper the $2.3 million upgrades are in response to increased use and processing quantity. She said the upgrades will improve access and ease of use at the facilities, in turn allowing them to process more material.