A number of factors continue to drive communities to develop organics-diversion programs.

Food scraps (plus yard trimmings) are almost always the largest component, by weight, of a community’s waste stream. So municipalities can see significant disposal cost savings via diversion.

Further, much research is being done on compostable packaging material, which could increase the feedstocks available for composting, opening up new opportunities in collection and downstream processing.

Each state has its own requirements, with some more stringent than others. For example, Vermont now requires that all food scraps, including those from households, be diverted from disposal, with no exemption for distance. 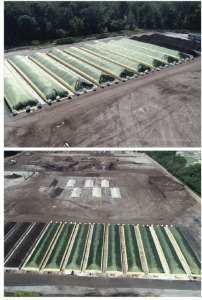 With all that activity, decision-makers need to understand the different organics processing options available to them. This article will give a general lay of the landscape and focus on one strategy in particular: aerated static pile composting, often referred to as ASP.

Working on range of scales

The compost industry is a mature one that provides many benefits. Compost helps replenish and stabilize topsoil, reduce global warming and protect public health by reducing air and water pollution. Communities across the country are recognizing these benefits and implementing policies and programs to commence and expand composting.

One distinct advantage that composting has compared with other materials management approaches is its ability to work at different scales, with both low technology and high technology systems. A homeowner’s backyard compost bin or pile can be an effective method for diversion of household food scraps and yard trimmings. On a larger scale, community, municipal and private facilities can handle from as little as a few hundred cubic yards of organics to more than 200,000 cubic yards each year. They can also take in a variety of materials, including yard trimmings, food scraps, manure, biosolids and mixed solid waste.

Further, most compost systems are modular and easily expanded over time as the quantity of materials increases over time, due to residents and businesses becoming educated and trained in organics diversion.

Relative to the compost process, technologies can generally be categorized into four basic groups:

Generally, there is a progression of increased costs and operating complexity from static piles to turned windrows to ASP to in-vessel aerobic composting. As cost and complexity increase, however, so do the capabilities and benefits of the technologies.

What does the processing sector generally look like today? The “2017 State of Organics Recycling in the U.S.” survey from BioCycle found a total of 4,713 composting facilities in the country.

Meanwhile, 34 states reported data on the composting methods utilized by facilities in their states (see graph). 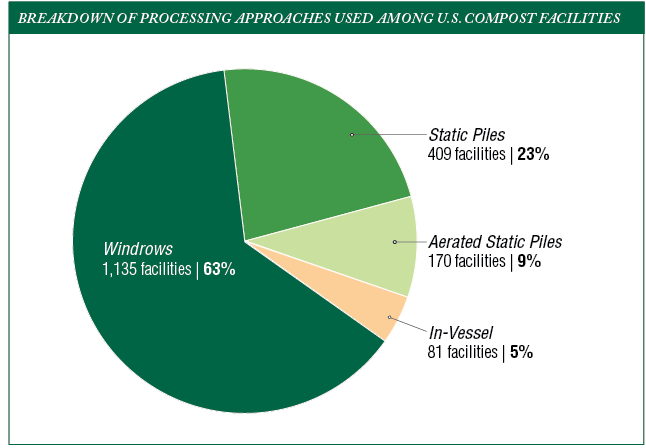 Source: BioCycle’s “2017 State of Organics Recycling in the U.S.” report

The power of forced air

As the table shows, the ASP method is used far less frequently than windrows, but as organics management in the U.S. continues to evolve, the method is likely to be adopted more.

ASP systems may include covered or uncovered piles. In either case, the oxygen concentration is maintained by blowing or pulling air through the pile using a blower and aeration pipes. Water may be added to maintain moisture content. 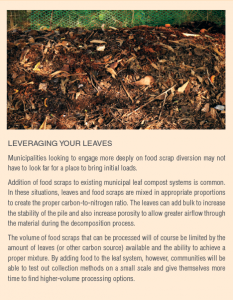 Since negative pressure pulls air through the pile into the pipe, odors can be filtered out before discharge (with a biofilter, for instance). With positive pressure, covering the pile with a layer of finished compost usually suffices as an odor-controlling biofilter.

With positive pressure, air flow is better and can be more effective at drying wet materials and cooling excessively hot piles, if needed.

Since ASPs are not turned during the process, the mixture and arrangement are important to ensure even air distribution and composting. Once mixed, organics are placed on a base of porous materials, such as wood chips or chopped straw, in which the pipes are located.

Initial pile height can be up to 8 to 12 feet, provided the porosity of the composting materials is sufficient to allow air to move between the particles. If the material is particularly wet, it may be necessary to use a bulky carbon source such as wood chips to increase porosity in the mixture. It is also useful to cover the pile with a 3- to 6-inch layer of finished compost to maintain moisture on the pile surface, discourage pests, insulate against heat loss, and prevent odors from leaving the pile.

Several vendors also market covered ASP systems that utilize a fabric cover over the windrow to manage odors. These piles are built, covered with an engineered fabric, and then processed with forced aeration.

Texture, recipe and formation of the piles are critical. Turning may be required periodically to exchange inner and outer material.

Surface water runoff and excessive moisture due to rainfall are typically less of an issue for covered ASP systems than for turned windrows or uncovered ASP systems, due to the cover. However, systems are needed to manage the contact water, regardless of whether they are covered or uncovered.

Hybrid systems of ASP and turned windrows may be used for cost efficiencies. The ASP system can be used for the first phase of processing, when the potential for odors is the highest. Subsequently, the materials can be processed in open windrows.

As noted earlier, a number of powerful factors are encouraging both businesses and local governments to divert more food and other organics from the disposal stream. As with all materials, diversion of organics can only be viable over the long term if downstream systems are in place to process and market the material. The ASP method is an important composting tool that may be right for some frameworks, allowing program officials to handle material in a cost-effective way if conditions are right.

Greg McCarron, PE, is vice president of SCS Engineers. He can be contacted at [email protected] Find more at scsengineers.com.