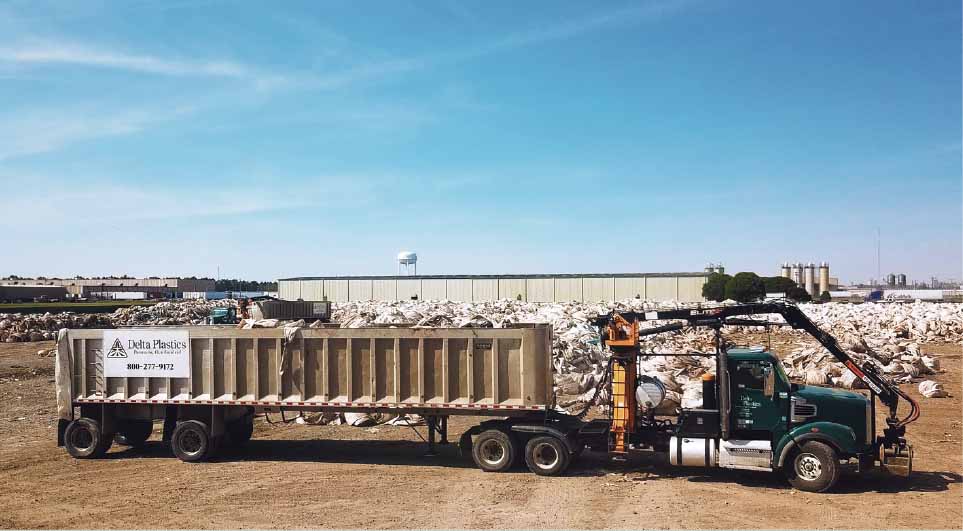 Revolution is different from many plastics reclaimers in that it’s both a plastics recycling company and a product brand owner – or rather a collection of brand owners.

Under the umbrella of Revolution, which is headquartered in Little Rock, Ark., are brands in the agricultural, commercial/industrial and consumer goods sectors.

“What truly makes us unique is our focus on a closed-loop, film-to-film process, from collections to recycling to manufacturing,” said Cherish Miller, vice president of marketing and sustainability at Revolution.

In October, the company announced it is laying out $20 million to expand its Stuttgart, Ark. production facility.

The investment will include installation of two additional blown-film lines capable of recycling post-consumer polyethylene (PE) into 40 million pounds of film per year, according to a press release from the Arkansas Economic Development Commission.

That continues a trend of expansion that has defined Revolution over the past decade. 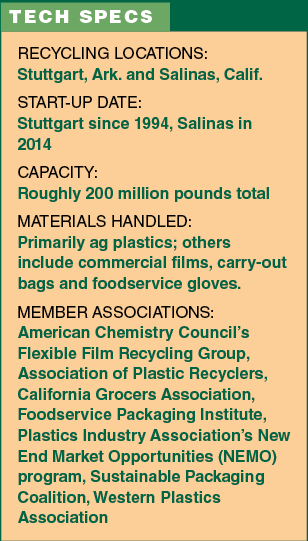 Finally, on the consumer products side, Revolution owns Command (retail, food service and grocery bags) and Dailygood Bags (trash bags sold to raise funds for schools and other organizations).

Some of these brands were acquired only recently. In 2018, Los Angeles company Command Packaging and related company Encore Recycling of Salinas were acquired by Revolution.

The feedstock coming into the plants consists mostly of agricultural plastics. Revolution, which has its own collection system with trucks and bins, gives farmers an alternative to landfilling, burning or stockpiling plastics.

In California, Revolution has partnered with drip tape manufacturer Toro. Through the arrangement, Revolution collects used Toro agricultural drip irrigation tape and recycles it at the Salinas plant into post-consumer pellets, which it sells to Toro for manufacturing into new tape.

At the same time, Revolution is growing the amount of non-ag scrap film it processes, including gloves, commercial film and bags. The company is “focused on rapidly expanding those feedstocks going forward,” Miller said.

One non-ag partnership of interest is with Chipotle Mexican Grill, which sends used plastic gloves to Revolution. The company recycles them into trash can liners used in Chipotle restaurants.

Using a wet process, Revolution recycles about 200 million pounds of PE per year. Its recycling output is pellets, most of which are used by Revolution’s manufacturing operations, although some are sold on the open market.

The company’s goal is to maximize post-consumer recycled content in its products where possible. The company’s washing process produces recycled plastic that’s clean enough for very high levels of PCR in thin film, which is a demanding application that’s sensitive to contamination. For example, the Revolution Bag trash can liners are made with up to 97% PCR.

The new film lines in Arkansas will be capable of producing construction film and sheeting, agricultural film, silo and dairy bags and geomembrane film.

“This added capacity is specifically designed to manufacture film that incorporates high levels of post-consumer recycled plastic, a cornerstone of Revolution’s unique manufacturing model,” according to the company.