How the use of robotics is evolving at MRFs 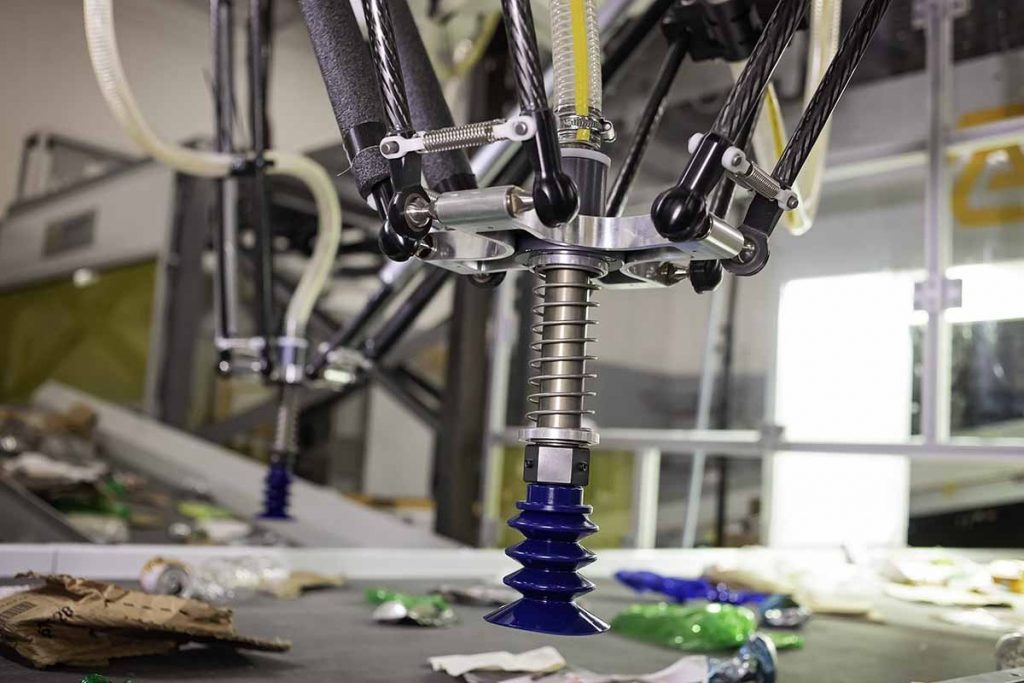 A leader with AMP Robotics says artificial intelligence has changed how robotics can be incorporated into MRFs. | Courtesy of AMP Robotics.

A recycling facility operator and a robotics company say artificial intelligence is providing materials recovery firms with much-needed data to analyze changes in the recycling stream. That’s in addition to sortation improvements.

Representatives from AMP Robotics and GFL Environmental spoke about the benefits of robotics during a recent presentation hosted by Greenbiz, a business sustainability media and events company.

The event was tied to an announcement from AMP and Keurig Dr Pepper (KDP), which recently redesigned its K-Cup coffee pods to produce them in a polypropylene format that is recyclable in many U.S. programs, though not all.

After the product redesign, KDP and AMP Robotics worked together to equip AMP’s robotic sorting systems with the tools to properly identify and sort the cups in a MRF. The project partners hailed the collaboration as an example of how producers, equipment/technology companies and other recycling stakeholders can work together to improve sortation.

“It really shows how artificial intelligence can help these facilities adapt quickly and really take advantage of these valuable material streams,” said Matanya Horowitz, founder and CEO of AMP Robotics.

The use of robots has grown exponentially in recent years. In 2019, Resource Recycling tallied nearly 100 in use in North America from providers AMP, Bulk Handling Systems (BHS), Machinex and ZenRobotics. Since then, others have entered the market, including Bollegraaf (Van Dyk Recycling Solutions is selling the robot in North America). In November, AMP announced it signed a deal with Waste Connections to deploy two dozen robots to MRFs across the country.

Horowitz of AMP Robotics said artificial intelligence has changed how robotics can be incorporated into MRFs. Machine learning allows robots to, over time, identify more and more items within the recycling stream. That includes materials that are smashed up, moldy, dirty and “generally inconsistent,” he said.

“This is largely what’s kept robots from being used in the recycling industry already,” Horowitz added. His company this month announced it raised $55 million from a number of investment sources.

During the Greenbiz event, Brent Hildebrand, vice president of recycling for GFL, spoke on behalf of the Canadian-headquartered hauler and MRF operator, which is one of the largest in North America. Hildebrand previously worked in positions at AMP, as well as Alpine Waste & Recycling, which was acquired by GFL.

The Denver-area Alpine Waste & Recycling MRF was an early adopter of robotics technology. One factor that led the facility to install robotic sorting systems was the rising cost of running a MRF, Hildebrand said.

“Part of those rising costs is rising labor cost,” Hildebrand said. “And on top of that, it’s just finding labor for these sites.”

The company found robotics to be a promising alternative when the company can’t find enough manual sorting personnel to staff its facilities.

Another driver is the evolving material stream, Hildebrand said. He pointed to PET bottles and aluminum cans as two significant examples of recyclable products that have been made with less and less material over the years.

“That changes the dynamic for what we can produce from a volume standpoint,” Hildebrand said.

Artificial intelligence can help the company respond to these changes in inbound material, he noted. For one, it can help a MRF determine exactly how the material stream is changing, by giving MRF operators the data to perceive changes. Beyond providing efficient material sorting, the artificial intelligence in robots is “really closely tied to a challenge in the industry of extracting information about the process,” Horowitz said.

“Really a core problem for recycling is that there hasn’t been a sensor that would let you tell what’s going on in the material stream, so identify how many bottles, identify whose bottles, identify what bottles are high quality and things like that,” Horowitz said. “And now with artificial intelligence, you sort of have this core capability that you can take advantage of in different ways.”

In addition to collecting data to develop a baseline of information, the artificial intelligence can help MRFs adapt quickly when new materials are introduced into packaging

“What’s powerful about this technology is that it can provide a new level of identification,” Horowitz said. “Pretty much anything you can teach a person to identify, you can teach our systems to identify as well.”

Robots can learn to identify different packaging from specific brands, types of material, shapes of packaging and more.

These expanded identification abilities have significant practical applications for MRF operators, particularly when it comes to producing higher-value commodities. As an example, Horowitz pointed to the common MRF practice of producing bales of mixed plastics Nos. 3-7, which are sold for typically low prices. But greater sorting can change that equation.

“When you start to do things like separate out the No. 5 plastics, the polypropylene, that can actually have significant value,” Horowitz said. “There are similar patterns in paper. If you separate out the office paper and the newspaper, it’s also more valuable.”

“In our business, we have buyers of these materials and they want a certain specification,” Hildebrand said. For example, buyers might want a bit more OCC included in a mixed-paper bale, depending on the application. MRFs that can meet those custom specifications may fetch a premium for their bales.

“You can kind of tailor these recipes to what your buyers want,” Hildebrand said.