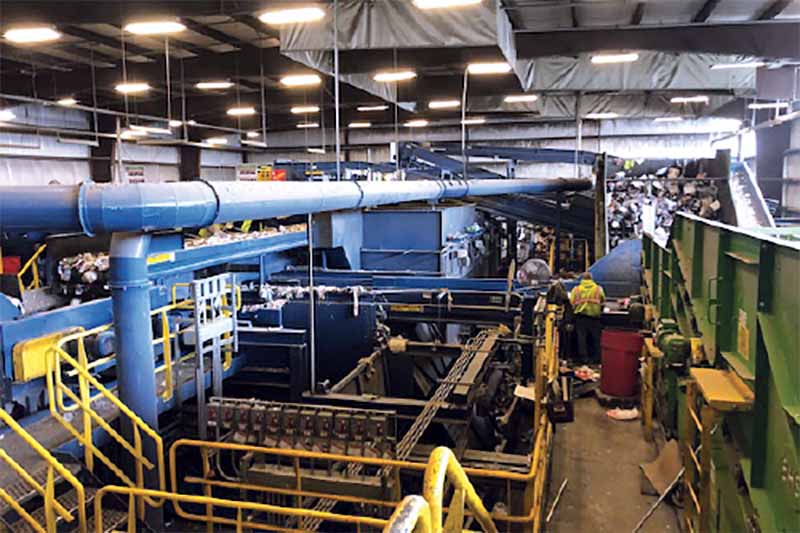 A 2019 retrofit at the Midwest Fiber Recycling facility involved installing a screen and optical sorter, as well as modifying the existing equipment.

After China’s National Sword policy raised fiber bale quality standards industry wide, Midwest Fiber Recycling did the same as many other processors: It added manual sorters and slowed down the line.

But rather than accept reduced efficiency as the new normal, the company then proceeded to install additional equipment and rejigger its existing system.

“The retrofit increased throughput and reversed the labor requirements and eliminated the need for an extra shift,” according to Peter Raschio of Bulk Handling Systems (BHS), which supplied the equipment. “It also increased PET and aluminum recovery and overall quality.”

First opened in 2011, the 90,000-square-foot MRF sorts single-stream material from a roughly 75-mile radius, where there’s about 1 million people. The site is located in Normal, Ill., about 130 miles southwest of Chicago.

About 70% of what comes into the MRF is fiber, 16% is containers, and the remainder is contamination.

The retrofit involved installing a screen and optical sorter, as well as modifying the existing equipment. 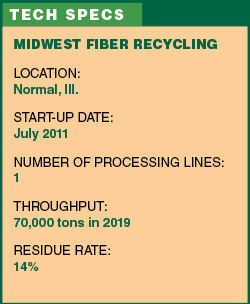 First, to address greater amounts of incoming small OCC because of the growing popularity of online shopping, BHS tightened the screen openings on the existing BHS OCC Separator screen, according to BHS. That means small OCC is now riding over the screen and remaining with other large fiber.

Then, BHS added a bypass screen after the MRF’s Debris Roll Screen, as well as an NRT SpydIR optical sorter equipped with a MetalDirector and a divided accelerator belt.

The new screen allows everything four inches and smaller to fall through. All that small material rides one side of the divided accelerator belt into the new 120-inch-wide optical sorter, which fires on plastics and aluminum. The other side of the accelerator belt has mixed paper that came from a BHS polishing screen – the optical sorter cleans up that mixed paper by removing any non-fiber.

That leaves the mixed paper free of prohibitives, which are particularly unwanted contaminants that can ruin a batch of recyclables or damage processing equipment, such as metals in a paper bale. Prohibitives are in contrast to “outthrows,” which are generally just the wrong grade of a given commodity (for example, old newsprint in an OCC bale).

The retrofit has had some considerable benefits. Mike Shumaker, chief operating officer at Midwest Fiber Recycling, said the total throughput has increased from 14 tons per hour to 18 tons per hour. As a result, the MRF has decreased run time by 10 hours a week. That has allowed the MRF to reduce its staff by four people.