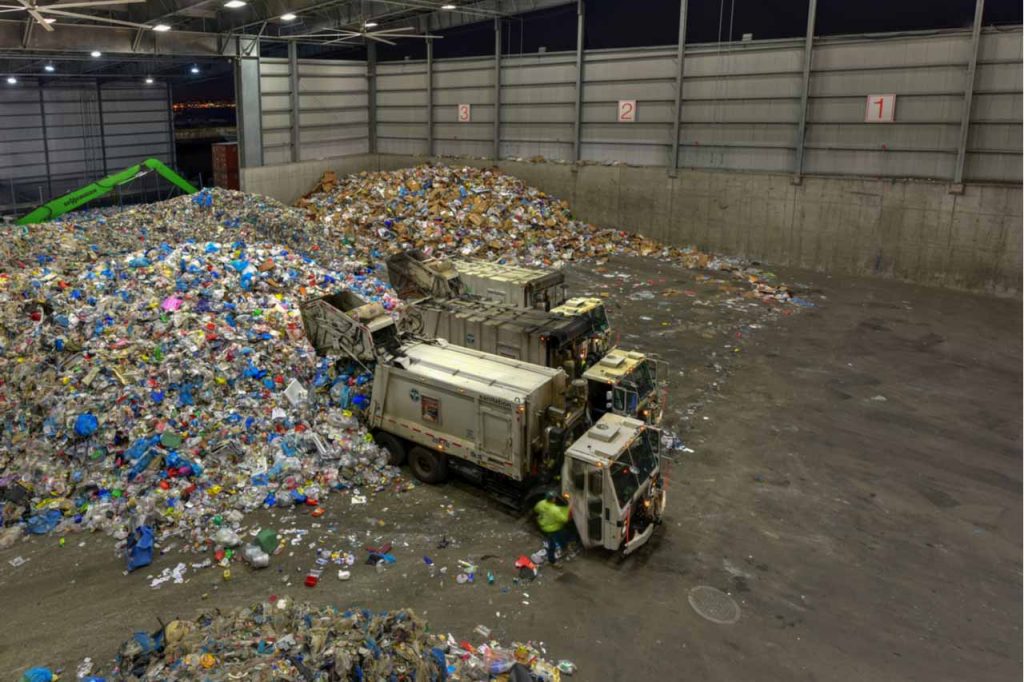 Figures provided to Resource Recycling show the city of Phoenix saw a significant tonnage increase as March progressed. With a population of nearly 1.7 million, the city is the fifth-largest in the U.S.

During the first week of March, Phoenix Public Works crews collected 11,677 tons of residential garbage, recycling and organics. That was a slight uptick from the 11,540 tons the city collected during that period in 2019.

The real increase began during the second week of March, amid significant government actions. President Trump declared a state of emergency on March 11, and Arizona Gov. Doug Ducey declared a public health emergency statewide on March 12.

“That’s when we started seeing the increase, very likely due to stay-at-home recommendations and people eating more at home,” the Phoenix Public Works Department said in a statement.

New York City sanitation crews collected 253,535 tons of material in March, including garbage, recycling and organics, according to monthly residential tonnage data. That was up 4.2% over the city’s March 2019 collection tonnage, although it was only up slightly compared with the March 2018 figure.

New York City, which has the largest concentration of coronavirus cases in the U.S., enacted a stay-at-home order on March 22.

“People are staying at home, getting a head start on spring cleaning, and they’re bringing unprecedented amounts of material to our convenience centers,” said solid waste director John Roberson in a release.

York County, S.C. reported a 40% increase in the weight of the trash and recycling streams, according to a news release.

Vancouver, British Columbia noted a shift in weight from commercial to residential waste generation beginning March 20, according to a CBC news report. But despite the growth in residential generation, overall waste tonnage is down by 10%, illustrating the enormous impact of the commercial sector being widely closed down.

Although recent tonnage figures are not yet available, the city of Greensboro, N.C. has seen an increase in contamination and rejected loads in the past few weeks compared to prior months. The weight of rejected tonnage grew from 47 tons in February to 92 tons in March. In an April 27 email, a program representative indicated the April number is about 144 tons.

“We expect this was a result of residents using their recycling cart for excess refuse once they filled up their regular refuse cart,” the city said in a statement.

Kalamazoo, Mich. saw a similar spike in contamination shortly after the stay-at-home order. In a release, the city said it recently learned that 2.4 tons of collected material was rejected due to contaminants. “We understand that the stay-at-home order may have resulted in increased trash per household, but everyone must do their part in keeping the recycle stream as clean as possible,” the city stated.

The decline of commercial and increase in residential tonnage has the potential to carry major economic ramifications for local-program stakeholders, depending on how contracts are structured.

Louie Pellegrini of Stanford, Calif.-based Peninsula Sanitary Service has seen residential tonnage for garbage increase, as well as a modest increase in residential recycling and organics. Meanwhile, the commercial stream has decreased substantially.

Pellegrini said his company’s transfer station has seen its weight handled decrease by 60%. That site was used heavily for construction waste disposal in the past, but far fewer construction projects are currently taking place in the area.

“A lot of the private haulers seem to think they’ve lost so much business on the commercial side that there is concern,” said Roche, whose organization takes in material from more than 70 communities in the Portland, Maine region. “A lot of the residential contracts oftentimes are fixed price contracts even though they are [now] picking up more trash. So that’s an issue for them.”

Roche said some haulers are renegotiating contracts and doing what they can to offset the financial impact.

“It really depends on when commercials come back on-line,” Roche said.

Dan Leif contributed to this report.