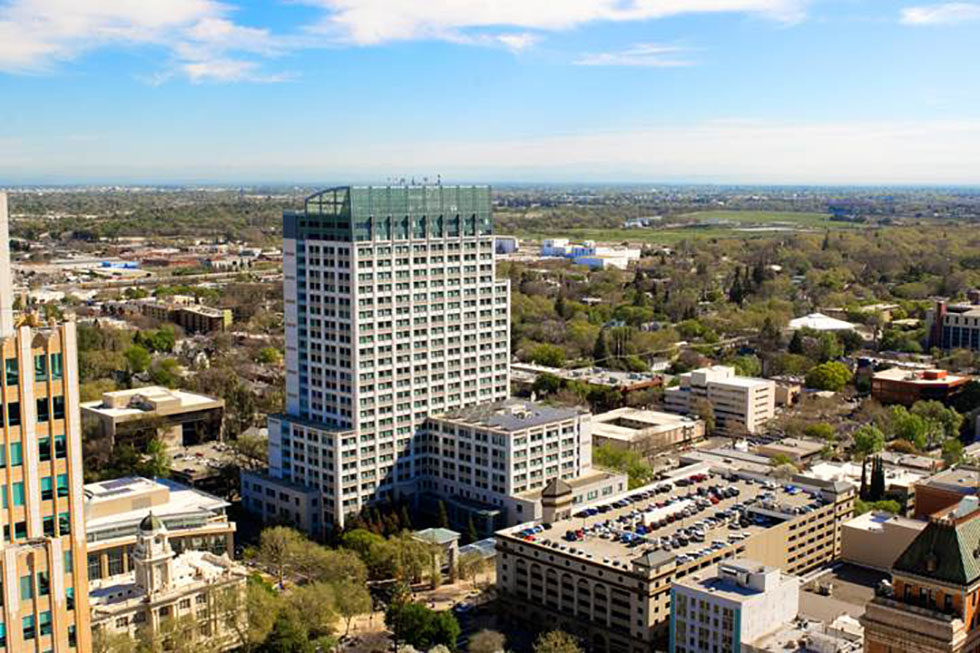 CalRecycle, headquartered in the green-topped building, gets its authority to regulate battery labels from California’s Dry Cell Battery Management Act of 1993. | Courtesy of CalRecycle.

California officials are considering new labeling requirements concerning lithium-ion battery recycling, as the batteries continue to cause fires at MRFs around the country.

Lithium-ion battery fires have caused millions of dollars in damage for recycling facilities, and this problem has received wider public attention in the past couple years. One particularly high-profile example was a fire at the South Bayside Waste Management Authority MRF in San Carlos, Calif. that inflicted more than $8.5 million in damages.

A representative of that facility called lithium-ion battery fires an “existential threat” for the residential recycling industry during a presentation in 2017.

The issue led the California Department of Resources Recycling and Recovery (CalRecycle) to explore labeling requirements to reduce the number of batteries that end up in the municipal recycling stream. Routing battery-containing devices away from the municipal stream and toward the electronics recycling sector would go a long way toward reducing fires at MRFs, CalRecycle explained during a workshop this month.

“We recognize that labeling is a small piece of the puzzle to decreasing fires, increasing battery collection and recycling, and benefiting public health and environment,” said Frederick Thomas, a senior environmental scientist with CalRecycle. “The question is how to make labeling as effective as possible in this regard.”

CalRecycle gets its authority to regulate battery labels from California’s Dry Cell Battery Management Act of 1993. The agency has regulated labeling of other battery chemistries but not lithium-ion.

During the workshop, CalRecycle sought input on what kinds of labels would be most effective. Currently, CalRecycle requires that labels on nickel-cadmium batteries identify the battery chemistry and explain that they “must be recycled or disposed of properly.”

The agency asked stakeholders about applying similar labels to lithium-ion batteries. Some attendees rejected the idea of stating lithium-ion batteries must be recycled “properly.” A recycling facility representative said that type of message leads consumers to believe they can put battery-containing devices in their curbside bin, because the load will go to a recycling facility.

“Just saying recycle properly or recycle at a proper facility, we’re going to have the same problem we have now,” said Sharon Simpson, representing Waste Management. “Nothing’s going to change.”

“We don’t think consumers actually read that information to begin with,” he said.

If CalRecycle requires labels, Kerchner recommended using messages commonly found in Europe, including the “chasing arrows” symbol and a crossed-out recycling bin. These have been required in Europe since the early 2000s, and there is a “very effective collection program” throughout the continent. Many of PRBA’s members already use those labels on their products, Kerchner said.

“I think that is more than adequate if you add that along with a very robust education program,” he said.

But even those labels are misconstrued by many consumers who think the crossed-out bin indicates that batteries shouldn’t be thrown in the garbage and that the arrows mean it should instead be placed in the recycling bin, Simpson said.

Any labeling requirement would have a timeline associated with implementation, Kerchner said, and timing would vary from product to product. Additionally, many of these products are shipped to the U.S. from Asia, adding logistical steps for the labeling process.

Kerchner estimated it could be a three- to five-year implementation process to change over to new labels. Cost is another consideration, but Kerchner declined to speak to what costs could look like.

Some labeling advocates took issue with the timing estimate. Nick Lapis, director of advocacy for Californians Against Waste (CAW), said the rulemaking around lithium-ion batteries is “long overdue,” particularly since CalRecycle has had the authority to regulate labeling for many years.

“I think three to five years is ridiculous. I can’t imagine it making any sense to give people more than six months to a year,” Lapis said. “You can always put an extra label on top of the product. You don’t have to redesign the entire product to put a label on it.”

Given the rise and severity of MRF fires caused by these batteries, Lapis said it’s “too much of a crisis to wait three to five years.”

Cory Bolis of ReThink Waste, the San Carlos MRF operator that experienced the fire, echoed the concern about an extended timeframe.

“Hearing that three to five years is what it’ll take just to have part of the solution in place, just seems like a completely horrid outcome for us on the receiving end, when these things are going through our facility, putting our infrastructure at risk, putting the safety of our workers at risk, and is jeopardizing, then, public dollars,” he said.

ReThink Waste and CAW supported a bill aimed at reducing battery fires that was considered in the state legislature during this year’s session. The bill moved through the state Assembly but stalled in a Senate committee.

CalRecycle is asking for comments on potential battery regulations until Dec. 6. Comments can be emailed to [email protected] Rulemaking could begin early next year if CalRecycle decides to proceed with the project.

Beyond feedback, CalRecycle is looking to recycling companies and manufacturers for some information the agency doesn’t have, including how many lithium-ion batteries are sold into California, battery recycling rate data, processing infrastructure information and more.