Over the last decade, the concept of the evolving ton in recycling has focused on the fact that plastic packaging is now a more dominant part of the recycling stream. But the next evolution could be defined, in part, by a rise in aluminum.

As consumers and policymakers have started to understand how much recovered plastic previously went to overseas markets and also been more informed of ocean plastic pollution concerns, aluminum cans have in some cases been held up as a solution.

PepsiCo, for instance, has announced it will roll out Aquafina water in cans instead of PET bottles in some markets. In August of this year, Coca-Cola announced it would be doing the same thing with its Dasani brand.

Plastic water bottles, meanwhile, have been banned in some settings, such as San Francisco International Airport. 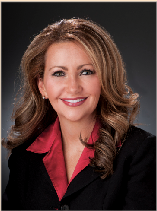 Those developments are music to the ears of Kathleen Pitre, who is vice president of sustainability and public affairs at Ball Corporation, the world’s largest can maker. Ball has around 75 manufacturing plants around the world, taking in aluminum sheet from suppliers and manufacturing aluminum cans and bottles.

The company currently produces roughly 100 billion cans a year and expects that output to grow, in part due to the current conversation around plastics. “It’s a good time to be a can maker,” Pitre says.

Resource Recycling recently talked with Pitre about brand owners’ recent aluminum embrace as well as wider recycling realities around cans right now. The transcript that follows was edited for clarity and length.

Resource Recycling: So you are hearing from large brands that they want to switch to aluminum packaging due to plastic concerns?

Kathleen Pitre: Yes, absolutely. In fact, in June the makers of Vita Coco, one of the biggest coconut water brands, launched a still and sparkling water brand exclusively in aluminum bottles. They had made a huge part of that brand about the sustainability credentials and the infinite recyclability of aluminum. That is one example that is really interesting and exciting. They’re talking about really trying to influence and shape the water market in a different way.

Do you think recent moves by brand owners are more a response to growing concern about plastic marine debris or to the notion that plastics recycling is “broken”?

It think it’s all of that. It’s hard for me to say whether it’s more one thing than another. But there’s been a lot of discussion about recyclability, recycled content, collection programs, and so on. I think there has been a realization among brands that many of those concerns today can actually be addressed with cans. That doesn’t mean they won’t continue to work on those recycling initiatives for plastic; they certainly are. But I think there’s just a growing recognition that some of this stuff is really hard and the time frames can be lengthy. And then we’re also seeing new brands who from the get-go are saying, “Why put ourselves in a package where we know we have to do some work from a recycling standpoint? Why not just start with cans which are designed for recycling?” 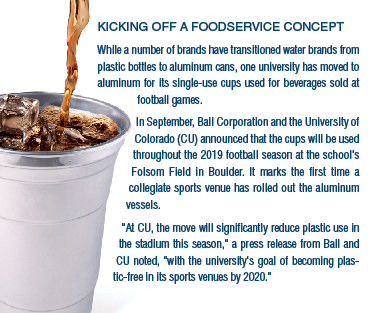 But isn’t there plenty of work to be done on improving the aluminum container recycling system too? The U.S. UBC recycling rate has been less than 50% each of the past three years, which is a decline from where it was earlier.

It’s hard to pinpoint exactly what drives that. In the state of California, for example, we’ve seen redemption centers closing. There’s always dynamics like that going on. I certainly don’t have the data to say, “Oh it’s definitely this or that.” There’s always little ebbs and flows. What’s going on with the China National Sword and the challenges economically around recycling is not helpful for any substrate right now.

Is a 50 recycling rate for UBCs acceptable?

In the U.S., it’s not good enough. When we look in other markets, their recycling rates for cans are much much higher. It’s worth noting that whether it’s curbside or informal systems or deposit systems, the can always performs well. But the U.S. really can and should be better than [50%] for the recycling rate.

What steps do you think could be taken to improve aluminum recovery?

There are so many people in the U.S. who still do not have automatic curbside access to recycling. If I had a magic wand, I would give every household the large roller carts that really provide that convenience and infrastructure for people to do a good job with at-home recycling. That’s an expensive and complicated endeavor, but that’s a key focus for The Recycling Partnership and part of why we are so involved in funding the group and participating in the group at the board level. Also, there’s still very significant gaps in the U.S. in terms of commercial recycling. That is an area that I think is under-discussed – we are losing a lot of materials in all the substrates because we don’t have consistently good commercial recycling programs in the U.S.

Why has that commercial realm has been overlooked?

I think it comes down to economics. It’s the same dynamic as the automatic access to curbside: Does a company have to pay more to have recycling done and picked up? And do they have the space to do that? At the end of the day, economics really drives everything. Part of the reason the can performs well is there is such a good economic case for it.

Yet the economics around aluminum can recovery have shifted too. In the summer of 2018, UBCs were trading at around 76 cents per pound and this summer it was closer to 55 cents. Do you have a sense for why aluminum can pricing is at a particularly low point right now?

The pricing moves around a lot. We see these ebbs and flows from time to time. The thing I focus on and I think is most relevant is that even when pricing is down for cans – as it is a bit down now – it’s still significantly higher than all the other substrates. I’m not close enough to it in terms of being on the MRF side or an aluminum producer, but looking at the economics, cans are still the most valuable substrate in the recycling stream by a pretty wide margin.

Beyond funding recycling infrastructure groups, how can you as a can manufacturer help strengthen recycling?

One thing is that we really engage with our customers on recycling initiatives and we’re increasingly having discussions about on-pack labels. The last thing we want is to not have our package recycled, and given the state that recycling is in right now in the U.S., we do feel compelled to do more. So we started to do some really fun and creative activations with some customers. So for example, with craft brewer Oskar Blues, we work together on a campaign called the Crush It Crusade – those are great opportunities that are fun, a way to engage consumers and a way to connect them to the brands they love. We’re willing to try new things. We recognize that just doing more of the same is probably going to get us the same.

Do you have any final thoughts on the intersection of cans and wider sustainability talking points right now?