For most people, a diary entry might recount memorable moments from the previous day, or details on love gone bad.

But in Oregon, residents were recently instructed to journal about the food they sent to disposal, recovery and other channels.

Using those writings, as well as survey results and waste-sort data from dozens of households, researchers looked at the types and tonnages of wasted food in the state. The work, conducted by Portland State University for the Oregon Department of Environmental Quality (DEQ), also probed the causes of the waste and residents’ attitudes.

The recently released Oregon Wasted Food Study lays out some compelling data and offers advice for municipal or state program leaders looking to conduct their own food waste studies.

This article lays out details on the methodology and findings of the Oregon project.

Wasted food: A preventable portion of the stream

Instead of concentrating on food scraps diverted from landfills or incinerators, Oregon researchers focused on the problem of people discarding their once-edible food. Oregon officials use “food waste” as a blanket term for any food and drink produced for humans that’s ultimately disposed of in landfills or incinerators, sent down the drain, fed to animals, composted or processed in an anaerobic digester, or donated or otherwise redistributed to people.

A subcategory, “wasted food” is the portion that was once edible (though not necessarily at the time it was disposed of), so the definition excludes items such as banana peels, bones and eggshells.

Understanding the reasons for wasted food was a goal of the recent study.

“Wasted food, that is throwing away food that could have been eaten, is preventable,” the report notes. “Indeed, prevention – avoiding the wasting of food in the first place – has far greater potential to reduce environmental impacts than recovery methods such as composting or anaerobic digestion.” 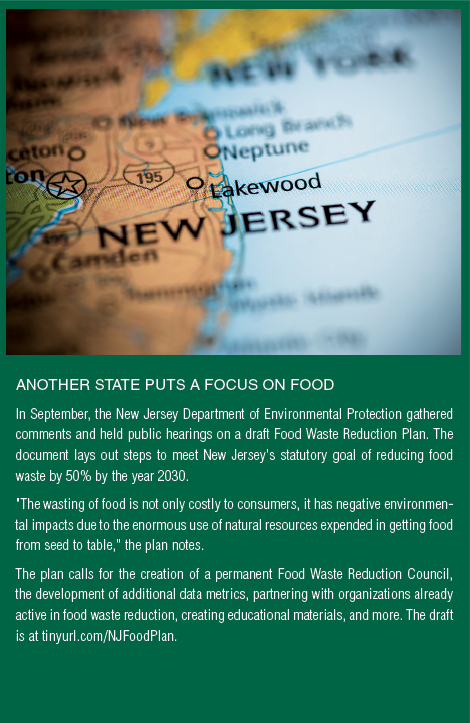 Oregon’s study comes as governments and others have placed greater emphasis on reducing environmental impacts from the food cycle.

An estimated 40% of food produced or imported into the U.S. for humans isn’t eaten, according to research from the Natural Resources Defense Council (NRDC). The United Nations has set a goal of reducing retail and consumer-level wasted food by 50% by 2030. The U.S. EPA and U.S. Department of Agriculture jointly adopted that goal, which includes only the edible portion of food waste.

Meanwhile, on the East Coast, New Jersey has set a goal of reducing food waste by 50% by 2030. It recently released a draft Food Waste Reduction Plan to map out its steps for meeting the goal (see sidebar for more).

A few takeaways from the Beaver State

The Oregon study found that 71% of food thrown away by households could have been eaten at some point. The most commonly discarded once-edible foods were fruits and vegetables, followed by prepared meals and restaurant leftovers.

The root cause for that food getting discarded, according to researchers, was a failure to manage the food, by either households “losing” it in the fridge until it went bad, or making or buying too much food in the first place.

Much attention has been devoted to the role “use by,” “sell by” or “best by” date labels play in food waste. The Oregon study found that consumers consult those dates when purchasing meat and dairy, but they don’t rely solely on the dates when determining whether to throw food out; instead, they check the food’s smell and taste, and they figure how long it’s been in the fridge.

Also, overly large portions for sale in grocery stores contributed to the wasted food problem, especially in the case of small households.

And the research found the problem affects all of us.

Researchers in the Beaver State also found underreporting was an issue with the diary method. That was also a problem in past food waste research efforts by the NRDC and the U.K.-based Waste and Resources Action Programme (WRAP).

The Oregon residents indicated in their diaries they disposed of 1.5 pounds of edible food per capita in curbside garbage and organics carts. But when researchers combed through the contents of those households’ carts, they found 1.9 pounds for each resident.

That being said, both methods came up with remarkably similar numbers for the percentages of inedible food waste versus once-edible wasted food. The diary-keepers indicated 29% was inedible (bones, shells, etc.), very close to the inedible number derived from the sorts: 32%.

In Oregon households, many surveyed residents noted feelings of guilt, saying they felt they should reduce the amount of food they waste. But a good portion also indicated they believe they waste less food than the average American. Perception didn’t always match up with the numbers. As examples, in the cases of adults living alone and households of two or more adults without children, the majority of respondents believed they threw out less food than the average American. But in reality, their discards were in line with national averages.

The researchers were able to suss out some ways people relieve their sense of guilt, even if the strategies yielded no or comparatively little environmental benefit. One of those was storing food in the refrigerator. Two-thirds of survey respondents said they felt less guilty about storing leftovers in the fridge rather than immediately throwing them away, even if the food ended up being wasted later anyway.

And nearly three-quarters of survey respondents felt less guilty about disposing of food in compost bins than the trash.

“Composting has been successfully marketed as a better alternative to landfilling and is contributing to diverting food waste from landfill,” the report noted. “However, composting may also contribute to increased generation of wasted food by alleviating some guilt around throwing food items in the trash. Some respondents justified their over-purchasing by explaining that they would compost the extra food items so it wasn’t actually wasting.” 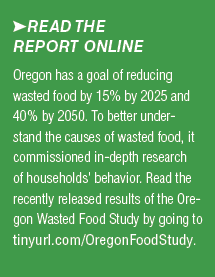 Acknowledging more research needs to be conducted into the issue of wasted food, the Oregon report provides advice for others looking to launch studies.

“One goal of this study was to learn from the data collection experience to provide insights to states, municipalities and other entities interested in measuring residential sector wasted food in their communities,” according to the report.

Diaries take a lot of money and resources in terms of recruiting households to participate. The method also demands ongoing support from research staff, rewards and incentives to get residents to participate, and compilation and analysis afterward.

But that strategy also yields a depth of data that others, such as waste sorts, can’t. For example, they can show all disposal channels, not just curbside carts – the Oregon diaries showed 11.2% of food thrown away was washed down the drain or garbage disposal. And they can glean the reasons why the food went uneaten.

But, as noted earlier, the diaries also suffer from an underreporting of weight, so the Oregon researchers recommended using other strategies, such as sorts of curbside material, to gauge the level of underreporting. Another benefit of sort exercises is they generate more objective data. A household filling out a daily food waste diary may change its behavior because it’s been made more aware of its waste, but an aggregated waste sort shows what households actually do during their usual routines.

Then there are different benefits and drawbacks to performing waste characterization studies on material in specific households’ containers versus material gathered across an entire collection route. It’s easier to separate food waste into a greater number of categories when it’s pulled from curbside carts, because it hasn’t been mashed in trucks’ compactors, but that approach is generally more resource-intensive.

The report acknowledges many programs may have limited data on hand. They may have numbers for the amount of food waste, as a single category, sent to landfill or recovered via composting or digestion. Researchers recommend, at a minimum, assessing how much of the food waste was once edible versus inedible, so the program can track progress toward reducing waste of edible food. Otherwise, well-intentioned programs may be left touting the success of reducing methane generation by diverting food waste from landfills, when the amount of edible food being waste is actually increasing, according to the report.

“If the overall amount of food disposed to all destinations is increasing, so are the environmental, economic, and social burdens associated with that wasted food and in particular, the large upstream impacts of production, which are typically unseen or not considered in traditional waste-based measurement or assessment,” the report notes.