Nothing is truly recycled until it is processed back into a usable good. Collecting, sorting and processing commodities are for naught without a company or process to reshape and re-manufacture the recovered materials into goods.

With that point in mind, cities and states are recognizing they need more places to ship their commodities, given recent import restrictions in parts of Asia.

Colorado may be in even greater need of end markets than many other jurisdictions. The state’s Front Range area (the urban corridor paralleling the Rockies from Fort Collins in the north through Denver and down to Pueblo in the south) is rapidly growing with populations that expect access to curbside recycling.

The state, however, contains no shipping ports, which causes many commodities to be trucked large distances to be processed and remade. Additionally, processors and end market businesses looking to establish in Denver and populous areas face high real estate costs, especially for warehouse space, in part due to the thriving cannabis and hemp industry.

To help build markets locally in the face of those challenges, state officials in Colorado have launched an innovative grant program to bring dollars and market knowledge to companies that could serve as important end users of recovered material for years to come. The initiative comes at a time when the state is feeling pressure to improve on materials recovery: Colorado’s current recycling rate is 17.2%, but the state’s goal is 28% by 2020.

“We have seen some effort to improve municipal programs and material sorting at [materials recovery facilities],” said Laurie Johnson, former director of Recycle Colorado and current chief operating officer for 5280 Recycling Solutions. “We need all stakeholders to look at the full recycling value chain to see where improvements will keep moving the needle forward, not only with curbside recycling but with all waste collection streams.”

Since 2007, Colorado government has taken an active role in promoting local end markets and recycling infrastructure by administering a grant program through the Colorado Department of Public Health and Environment (CDPHE).

Over the past decade, municipalities, nonprofit entities, materials recovery facilities (MRFs) and private businesses have been the recipients of a total of almost $25 million in Recycling Resources Economic Opportunity (RREO) grant funding.

Of late, the need to foster local end markets has become one of the top priorities for CDPHE. While several options were on the table to address the issue, including the creation of an end market development study or running another large grant cycle with a single end market award, the state elected to go in a new direction in 2018 by launching a pilot program called Colorado NextCycle.

The CDPHE’s traditional grant model had a mixed track record, especially due to the inherent constraints of state funding. All funds had to be dispersed in the fiscal year of the award, limiting the potential awardees to projects that were already shovel-ready. Startups and early-stage companies with long-term potential did not qualify and were not considered for these traditional grants.

The state was ready to work with a different model – but launching a pilot program in the middle of a budget cycle meant funding was limited. Colorado NextCycle was thus created as a program that leveraged small grants by supporting projects at an earlier stage. The program offered limited financial awards of $5,000 to projects that showed the most potential to impact end markets in the future, regardless of the maturity of the companies applying.

After a competitive application cycle, nine projects were accepted into the Colorado NextCycle program, including newly incorporated (or not yet incorporated) startups, established Colorado manufacturers looking to expand, and out-of-state businesses considering Colorado as their next location. At least half of the teams are planning to apply for future rounds of RREO end market development grants when their projects have reached a point where they are ready for this type of funding. See the chart below for the details on the nine grant winners. 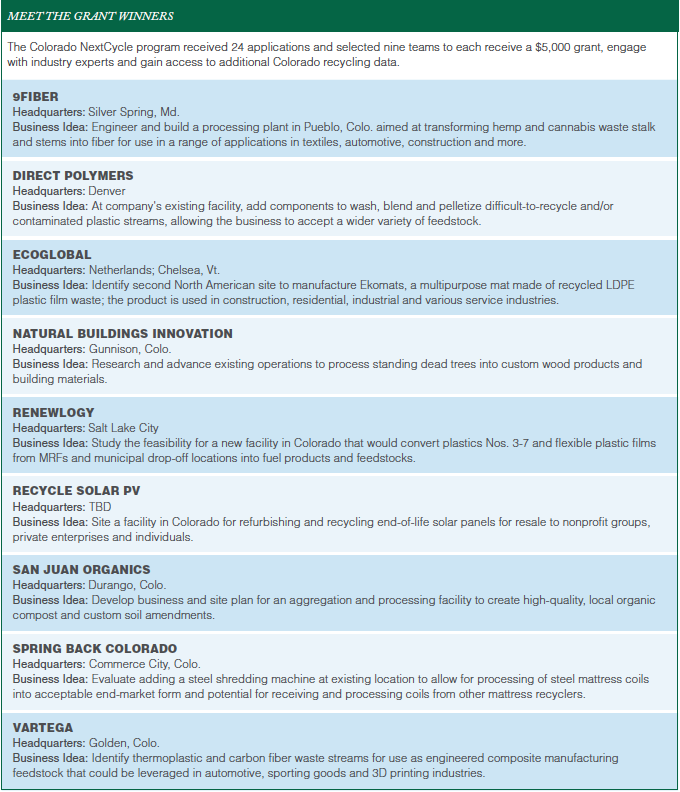 Along with the funding, the Colorado NextCycle teams had access to a Technical Advisory Committee (TAC) made up of experts with recycling knowledge and investing experience. Before the start of the program, the TAC was also responsible for reviewing the teams’ applications and making recommendations to the state’s approval board on which teams to accept.

Resource Recycling Systems (RRS), which helped design the program with the state, assembled the TAC, provided individualized consulting for teams and hosted an in-person event for the selected teams to attend. The two-day gathering provided space for teams to connect with each other, the TAC, private investors and state officials.

“We weren’t quite sure how [the program] would turn out being a new incentive program, but we couldn’t be more pleased with the outcomes we have seen from each of our project teams,” said Eric Heyboer, environmental protection specialist II at CDPHE.

The feedback from the NextCycle entrepreneurs has been positive, with participants noting tangible benefits.

“The NextCycle program made a tremendous difference in moving forward with my business in Colorado,” said Adin Alai, CEO of 9Fiber, one of the teams in the Colorado NextCycle program. “The industry experts that we were exposed to saved me from losing time and making expensive mistakes.”

Indeed, the industry connections fostered by the program have been valued by a number of teams.

“This innovative state business incubator provided our team with technical support and business relationships that we would not have received otherwise,” noted Monique DiGiorgio, founder of San Juan Organics.

Added Adam Hill, principal of Direct Polymers: “The NextCycle program … connected us with potential investors and provided a platform for us to pitch our business idea to companies throughout Colorado. The group workshops allowed us to develop synergies with other NextCycle teams.”

That sense of connection has been observed by NextCycle organizers as well.

“It’s been especially exciting to see the project teams developing synergies between themselves, creating new partnerships that may not have been explored were it not for Colorado NextCycle,” said Heyboer of the state’s environmental agency. “One promising outcome is that we anticipate seeing a variety of new business ventures in Colorado focused on plastics.”

Building on the momentum of the Colorado NextCycle program, CDPHE is looking to release a grant of $1 million or more focused on end market development in September 2019. The grant, which is open to Colorado NextCycle and non-program teams alike, will likely be split among several projects and is dedicated to helping establish and grow end markets within the state.

Colorado is also expanding funding in the state for recycling with the recently passed Front Range Waste Diversion Enterprise Grant bill, which is estimated to provide $14 million annually in grant funding for recycling and recovery efforts in the Front Range. The legislation was signed into law May 30 of this year.

The state understands the critical need for end markets and looks to the Colorado NextCycle program and other programs to help nurture a circular economy and support cutting edge manufacturers who produce value from recycled materials.

Colorado NextCycle is currently being evaluated for renewal for another class of end-market business idea teams.