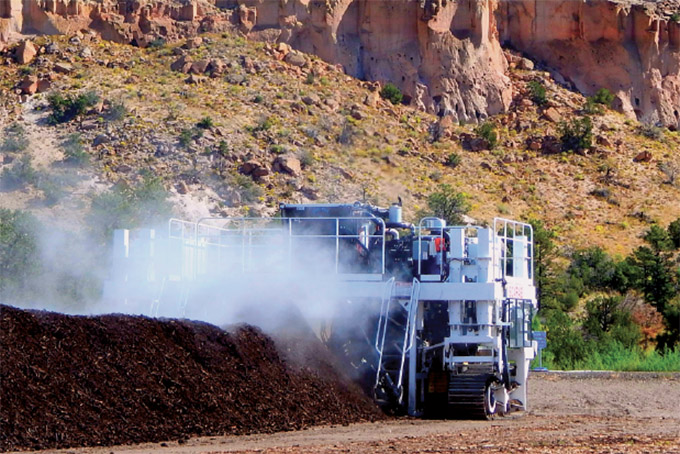 Los Alamos is known to many as the site of a major research center that has made some pivotal discoveries, including development of the atomic bomb. In some ways, its research facility also factors into the community’s diversion efforts.

The rural community in northern New Mexico has about 18,000 residents and is home to the Los Alamos National Laboratory, one of the U.S. Department of Energy’s 16 major research facilities around the country.

That brings a particular type of resident to the community, and it shows in the recycling realm. Although Los Alamos is small, the population is engaged, interested in recycling right and curious about diversion data, said Angelica Gurule, environmental services manager for Los Alamos County, which comprises the unincorporated communities of Los Alamos and White Rock.

According to the county, Los Alamos residents have “among the highest levels of educational attainment of any community anywhere, with many residents holding a masters’ degree or PhD.”

In addition to its well-educated population, the incorporated county has a practical impetus for achieving strong diversion results. Los Alamos has a closed landfill, and all waste must be transported some 90 miles away for disposal.

“We do our best to keep as much trash out of the landfill as possible,” Gurule explained.

Specifics on the stream

The National Laboratory also contributes its own stream to the city’s diversion efforts. 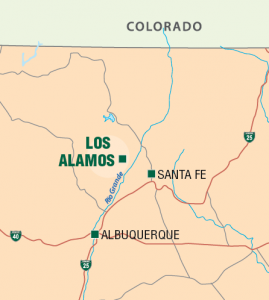 As a major research facility, the lab naturally generates a great deal of clean office paper. The lab separates the paper primarily for data security reasons, wanting the waste paper to remain domestic for processing. More sensitive documents are shredded rather than recycled, but the more routine papers are able to be recycled, and they provide a clean stream of source-separated material, amounting to 135 tons last year.

“All of our programs are voluntary,” Gurule said. “They’re not mandatory at all.”

The county collects material from households and manages the transfer station. Collected material is sent to regional processor to be sorted and marketed.

The community conducted a waste sort in 2015 and found that yard trimmings would be a relatively easy stream to separate. The yard trimmings collection program was recently launched, and it reflects an emphasis on diverting materials as close to home as possible. The county runs its own compost site.

“We’re kind of a little island up here,” Gurule said. “So as much as we can maintain, handle or manage the material on-site, within the community, to me that’s the most sustainable option.”

Program evolution through the years

The county closed its landfill 10 years ago because the site had reached capacity. Shortly afterward, the county opened its transfer station and introduced roll-carts for garbage collection. Single-stream, cart-based recycling launched around 2012 and was expanded into its current form in 2014.

The single-stream program accepts most standard recyclables, but it does not take in glass. However, there are drop-off locations for that material, yielding about 300 tons per year. 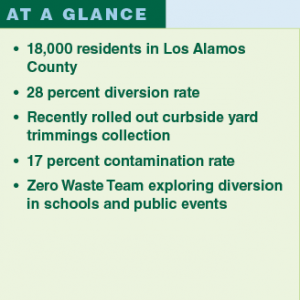 Friedman Recycling, which receives most of the recyclables collected in Los Alamos, conducts an annual material survey, and the county’s contamination rate averages about 17%.

Like many programs, the county has seen its recycling financials shift of late – from receiving revenue for recyclables to paying to move the materials. Even so, the program has not stopped accepting any recyclables. Gurule said the recycling program doesn’t want to make major shifts in accepted materials, to avoid confusing residents about what is and isn’t allowed in the cart.

Additionally, it still makes financial sense to recycle despite the depressed value of materials because the recyclables processing fees are still lower than disposal tip fees.

The program is also evolving, with the county recently developing a Zero Waste Team to work on outreach around the community. This team engages in a variety of diversion and waste reduction projects. For instance, the Zero Waste Team works with local schools, particularly on cafeteria diversion.

School outreach is a great use of resources, Gurule noted, because students take the lessons home and talk about recycling with their families.

Another recent spot of outreach focus has been a summer weekly concert series that’s attended by anywhere from 1,500 to 5,000 people per event. The Zero Waste Team has explored targeting the single-use foodservice materials distributed to concertgoers.

“The vendors were completely on-board, they were encouraged but not required to serve on either recyclable or compostable items,” Gurule said. These efforts led to 50% waste diversion at one concert.

Bringing diversion efforts to those types of public events also gets residents thinking about waste at a deeper level. Gurule noted that following a Fourth of July event this year, some residents said they wished there had been more recycling options.

“The fact that they’re conscious about trash, to me that’s a really big step in the right direction,” Gurule said.