Oregon was the first state in the U.S. to implement a beverage container deposit/refund system, rolling out its program in 1972. Since then, the system has shown it can keep on a path of continuous improvement.

For instance, in recent years, the program expanded its list of covered containers, boosted the redemption value and has seen impressive results (including 85 percent recovery in 2018 for a broad range of covered beverage containers).

A collaborative policy development process, coupled with implementation that incorporates the beverage sector, has been central to the Oregon evolution.

The change from an individual distributor-based redemption system to the like-kind redemption set the stage for the creation of the Oregon Beverage Recycling Cooperative (OBRC), which has been crucial in providing the beverage companies, distributors and retailers the opportunity to contain costs through collaboration while also expanding access and innovating new services.

The work of the task force ultimately yielded new legislation, passed in 2011, that modernized the program by:

“We are recycling more container types and recycling them at a higher volume than at any other time in the nearly 50-year history of Oregon’s bottle bill,” stated Joel Schoening, OBRC community relations manager.

In addition, OBRC has helped develop a plastics reclaimer called

ORPET that is now recovering 13 million pounds of PET in the state each year. And the cooperative has developed BottleDrop Refill, a refillable glass bottle redemption and washing system used by craft beverage makers with distribution in the state.

The end result is an expansive container refund program, a growing network of convenient BottleDrop redemption centers, and a deposit level of 10 cents per container that drives participation. It’s a clear recipe for success for other industry stakeholders looking to boost the supply of materials from recovered beverage containers. 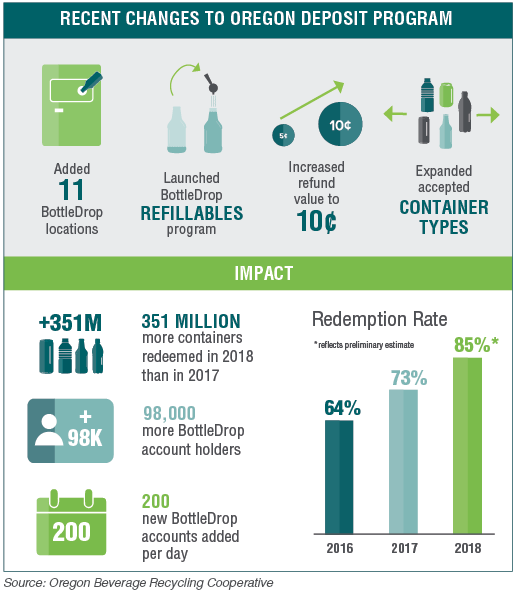