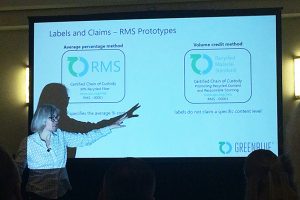 Hundreds of packaging stakeholders came together in early April in Seattle to talk sustainability. And recycling factored into the conversation in a number of ways.

Below are some of the takeaways from Seattle.

‘Lifeline to the future’

SPC Impact, which drew 665 attendees, featured a panel discussion garnering varied perspectives on the current “war on plastics,” which has been spurred in large part by increasing media attention on the global marine debris problem.

“In the past, petrochem companies saw recyclers as eating their lunch,” Kosior noted. “Now we’re entering this revolution where we’re seeing resin companies realize recyclers are their lifeline to the future.”

How can industry stakeholders best harness the current energy around better materials management? Kosior brought up the notion of making minimum levels of recycled content mandatory in “everything we make.”

“If we had mandatory recycled content, even just 30 percent, we would have a huge leap,” he said.

While mandating post-consumer material may seem politically unfeasible in some regions, large consumer packaged goods companies have in many instances already taken action on their own. And SPC recently launched an initiative to keep tabs on what companies are doing.

The organization’s goals database is currently tracking the sustainability commitments by dozens of companies – right now, more than 90 businesses are part of the project, said Nina Goodrich, SPC’s director.

She noted the database breaks brand owner goals down into 14 different categories. Of the companies being tracked, 55 percent have committed to increasing recyclability and 62 percent are pushing for more use of recycled plastic.

SPC expects to update the list each quarter. “It can hopefully be a great starting place to see where companies are going,” said Goodrich.

Another effort to bring more visibility and potential growth to recycling is the development of an industry standard – and accompanying label for packaging – that would verify the use of recycled material. It might also set the stage for a system of trading recycling credits, similar to existing marketplaces for renewable energy.

Thompson said that at the most basic level the system would provide auditing of the chain of custody for different materials so that brands, consumers and others would have faith in the recycled-content claims on the side of a bottle or other item.

A second potential part of the standard would borrow a concept from the Sustainable Forestry Initiative (SFI). Under that paradigm, paper manufacturers might have some product lines that are well-suited to having recycled content and other product lines where dropping in recycled material remains technically challenging. As long as they meet a minimum recycled-content standard across their entire procurement portfolio, they can use an SFI label on all products. The label notes the company is “promoting sustainable forestry and recycled content.”

A third idea being explored by GreenBlue’s standard team is built around “attribute of recycling certificates,” or ARCs. Under this framework, a formula would be developed in which one ARC would represent a certain level of output from the recycling sector – it could be a certain tonnage of recycled fiber, polymer feedstocks from a chemical recycling firm, or something else.

The ARC concept, which is analogous to the marketplace for renewable energy certificates, aims to provide a system for spurring new capacity and quantifying the use of newer materials recovery technologies by end users. The structure would only apply to companies that have built facilities or done significant upgrades after a certain date, a fact that is likely to be controversial. And in fact, opposition was voiced by some audience members at the SPC session.

A nascent recycled-content standard could involve a system of trading recycling credits, similar to existing marketplaces for renewable energy.

Thompson reiterated the fact that the standard is still very much in the developmental stage. And she said one of the next steps will be establishing a technical advisor board to ensure a range of stakeholders have a say.

“We really are at mile zero here,” Thompson said. “We might get to a point where end markets are saying it’s too controversial. But we definitely want to test all three elements [of the standard] in the scope to see which ones could work.”

Next steps for AI

When it comes to artificial intelligence and materials recovery, much of the focus thus far has been placed on robotic systems on recycling sort lines. However, AI technology is also proving to have a role in efforts to stem marine debris.

Wendy Phippen, director of environmental product compliance at Microsoft, said during a presentation that the software giant has committed $50 million over five years to its AI for Earth effort, which focuses on leveraging artificial intelligence to spur improvements in agriculture, water, biodiversity and climate change.

One element of that initiative is a partnership between Microsoft and nonprofit The Ocean Cleanup. The environmental organization has placed cameras along rivers in Southeast Asia to document the volumes and types of pollution that have flowed into waterways.

“There’s massive amounts of data from these cameras,” said Phippen. “To do a count and quantification is not humanly possible, but AI can learn and identify plastics in a photo. This is incredibly important in the effort to solve this problem.”

She added the company is looking for more projects to implement its technological capabilities to improve the environment.

“You tell us what’s next and we’ll partner with you,” she said.