On the coast of New Jersey, a county government is collaborating with a local materials recovery facility (MRF) operator to invest millions in a facility overhaul. In California, a regional processor recently completed major upgrades at its marquee recycling facility in San Francisco. And a Canadian operator is adding new technology to two plants.

While retrofits have always been a reality in the MRF sector, the pace of action has picked up considerably in the second half of 2018 and the first part of this year.

It’s a sign of the pressures recycling programs and companies face to meet new quality standards in the wake of China’s National Sword policy action and also keep pace with the ever-shifting stream.

But will new equipment be enough to keep processing profits at sufficient levels? Operators are expressing confidence.

“Paper mills and manufacturers that receive bales of recycled plastics now demand that materials shipped to them contain less than 1 percent impurities,” Recology, the company that upgraded the San Francisco MRF, wrote in a press release. “Some cities say they cannot meet the new standard. San Francisco says, ‘Together we can.'”

What follows is a rundown of some of the biggest MRF upgrade projects to unfold of late. Together, these initiatives amount to tens of millions of dollars worth of investment, and they are likely a preview of what the industry can expect to see in other facilities over the months and years to come.

Operating at loss for first time in 30 years

The Jersey Shore is a long way from Beijing. But when it comes to recycling, the actions of Chinese decision-makers have directly affected those of leaders in New Jersey’s Ocean County.

The Northern Ocean County Recycling Center in Lakewood, N.J. will receive several significant equipment shifts that county officials anticipate will produce cleaner materials. According to the officials, the spending was spurred by China’s import restrictions, which have stifled material movement, lowered prices significantly and led to a market in which buyers can ask for higher-quality material.

“Some changes to the recycling program and upgraded processing equipment are now needed to ensure the operation is financially secure for the future,” said Ernest Kuhlwein, Jr., director of the county’s solid waste management department, in a press release.

The county government recently allocated $4 million to the improvements. The MRF operator, Atlantic Coast Recycling, is expected to contribute about $1.5 million.

The upgrades include a glass removal and cleanup system, optical sorters for the paper line, additional screening technology, a new paper baler and other equipment.

In conjunction with the equipment upgrades, the county will fund “stepped up enforcement and educational programs,” added Gerry Little, an elected county official.

Stakeholders in one of the most populous cities in the Southwest have also seen the economics of recycling shift in a disconcerting way over the last year.

The North Gateway Transfer Station in Phoenix experienced a $1.8 million drop in revenue in 2018. But changes are on the way.

The city-owned MRF is operated on a contract by ReCommunity, a company purchased by Republic Services in the fall of 2017. It sorts recyclables from the curbside recycling program in Phoenix.

Now, the facility is investing $4.5 million in upgrades that will include multiple screens, plastic sorting equipment, and a larger and improved presort line, according to the Arizona Republic newspaper. The Closed Loop Fund industry group is kicking in $3 million, the nearby city of Peoria, Ariz. (which hauls a significant volume of material to the transfer station) is putting in $1 million, and the city of Phoenix is contributing $500,000.

According to City Council documents, the equipment upgrades will “restore the loss of yield and production speed necessary to comply with new quality standards for recycled commodities.”

The improvements, which are slated to be installed by the summer, are expected to increase MRF revenue by up to $200,000 per month, according to the newspaper.

Meanwhile, to the north, Recology has finished a significant project at its 200,000-square-foot Recycle Central plant on San Francisco’s Pier 96.

The effort was three years in the works and it completed during 2018. Although it was technically underway before China implemented import restrictions, Recology noted in a release that the $14 million facility upgrade will help the company and municipal program rise to the challenge of meeting new quality demands.

The facility “is now home to seven optical sorters, including new state-of-the-art sorting machines from France that allow us to sort more and smaller materials,” the company stated. 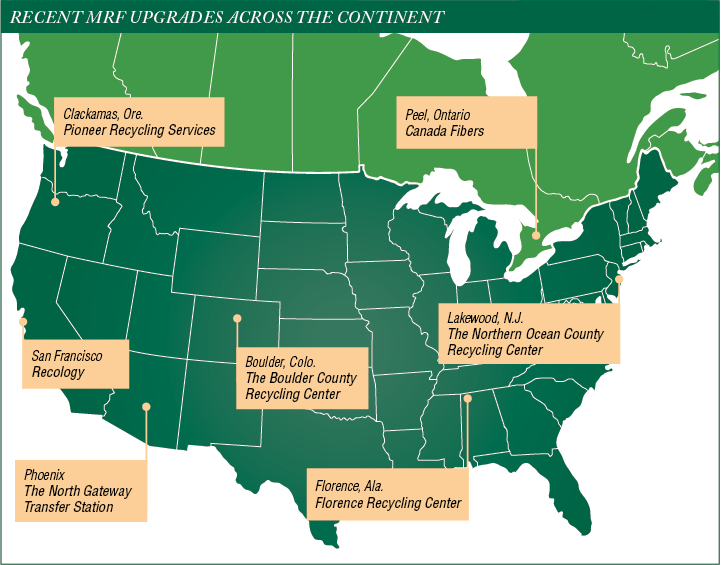 The push to enhance MRF lines has not been limited to the U.S. Canadian operator Canada Fibers is upgrading an existing facility while also launching a new site.

The company in February announced the details: a new MRF in Winnipeg, Manitoba, slated to begin operating this fall, and a retrofit of its Peel, Ontario facility that will be completed early next year.

The new facility in Winnipeg will incorporate infrared-equipped optical sorters that the company expects will achieve high recovery rates and purity levels. Additional unspecified equipment will allow flexibility in sorting new types of material as the stream changes, the company stated. The building will total 80,000 square feet.

A key priority for the company was to spend funds where they’ll have a lasting impact. After all, Badger said, current conditions can shift rapidly.

The company estimates both facilities will sort more than 100,000 metric tons of material per year. Badger declined to offer details on the cost of the two projects.

Canada Fibers currently operates 13 MRFs across Ontario, a number that does not include the upcoming Winnipeg site.

Besides the export market disruptions, material shifts, including the increase of OCC in the residential recycling stream due to the rise in e-commerce, have significant ramifications for the industry.

Those are clearly visible in Boulder County, Colo., which in late 2018 invested in improvements at its MRF to handle the changing OCC stream.

The Boulder County Recycling Center, which is owned by the county and operated by Eco-Cycle, recently upgraded from a double-deck to a triple-deck OCC screen. The upgrade will help the facility “maintain high production rates while mechanically capturing increased amounts of cardboard – in particular, smaller pieces of cardboard the facility has been receiving more of recently,” according to a press release.

According to Darla Arians, resource conservation division manager for the county, typical e-commerce boxes are smaller than the type of OCC the older screen was designed to process.

“Now, we can spend less time on the fiber line pulling out small pieces of cardboard and focus our attention elsewhere,” she said in the release.

Besides the equipment, the recycling center expanded its presort station from a two-person to a six-person staff. The upgrade included additional chutes and conveyor equipment to handle contaminants.

The county described these improvements as “a huge efficiency gain.”

One of the latest trends in sortation technology is the use of artificial intelligence-powered robotic systems that can identify items on the belt and be programmed to pick off different commodities.

Robots will be installed at a Clackamas, Ore. MRF, thanks to government grant funds aiming to boost local recycling infrastructure.

Pioneer Recycling Services will purchase and install two sorting robots to improve container recovery at the company’s MRF outside Portland, Ore. The company received a $284,000 grant from Metro, a regional government entity covering three counties in the Portland area, and Pioneer put up matching funds to complete the purchase.

The robots “will use artificial intelligence on the sort lines to process recyclable materials faster and more effectively, thus improving the marketability of those materials,” according to Metro.

They will be placed on the the commingled material stream and will sort faster and produce a cleaner product than is currently accomplished with manual sorters, Metro stated. The robots also position Pioneer for future stream changes, as the artificial intelligence technology allows the robots to adapt to material shifts and continue sorting with accuracy.

Overall, the equipment will allow Pioneer to process up to 3,500 additional tons per year of plastic, paper and metals.

A nearly $500,000 investment has brought upgraded sorting equipment to the recycling facility in Florence, Ala., a city of about 40,000 residents in the northern part of the state.

The equipment “will change the game for us,” Rachel Mansell, recycling coordinator for the city of Florence, told Resource Recycling.

Three years ago, Florence switched from bins to carts with help from the Alabama Department of Environmental Management and The Recycling Partnership. That switch increased the amount of material collected through the curbside program, Mansell said.

The new equipment, she added, helps the recycling center properly process the increase in volume and gives it room to grow even more.

“With labor being the most costly part of recycling, automation is vital to the health of our program,” she said.

The upgrade was made possible by grant funds issued over three years from the state environmental department. The first two years facilitated the equipment purchase, and this year the system was installed in its entirety. David Koonce, manager of solid waste, street and recycling for the city, added that the grant funding has “dramatically” improved the program.