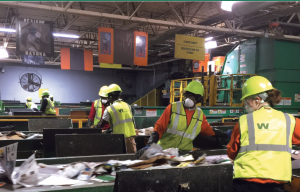 A half-hour’s drive northwest of downtown Milwaukee, the largest MRF in Wisconsin is working to extract value from the region’s single-stream recyclables. And it has recently added robotics and other sortation technology to help improve efficiency.

The Waste Management MRF in Germantown, Wis. processes about 850 tons per day of single-stream material from households and businesses throughout Wisconsin (except the westernmost counties) and portions of Michigan’s Upper Peninsula. Material arrives on trucks owned by Waste Management, municipalities and third-party collectors.

Of the material moving through the MRF, about 62 percent is fiber, 22 percent is containers, and the rest is contamination. The biggest issue the facility deals with is plastics bags and bagged material, according to a Waste Management spokesperson. 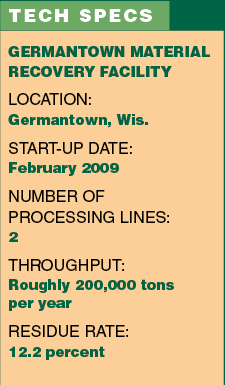 The 148,896-square-foot facility relies on sorting and baling equipment from CP Manufacturing, MSS, TOMRA, Harris and Bollegraaf. It has a total of four MSS and Tomra optical sorters, CP Systems plant components, HVC 140 and HVC 180 Bollegraaf balers, and an HRB 240T 100 Harris baler.

In fall 2018, it upgraded its optical sorters to maximize plastics recovery, and it recently installed robotic sorting technology. The robot, one of the first to be installed by Waste Management, was provided by Denver-based company AMP Robotics. It is sorting UBCs, tubs and lids, natural HDPE, colored HDPE and aluminum trays.

New robotic sorting technologies rely on artificial intelligence to identify items based on their visual appearance, including shapes, colors, textures, and more, much as a human would. The systems also leverage “machine learning” to enhance productivity and accuracy over time.

While they can’t match the sorting speed of an optical sorter, the robotic arms can exceed human pick speeds, take up relatively little space and can be programmed to sort a number of different materials at once.

Waste Management began testing the technology in 2017, when it installed a robot at a Houston-area MRF. The company says it plans more in 2019.