Stakeholders in the petrochemical industry gather in Texas every year to explore the future of the industry. Last March, at the World Petrochemical Conference, the mood was generally upbeat.

Speakers were discussing how the future could not be brighter – thanks to rollbacks in regulations, additional tax cuts, and more access to natural gas reserves with the “shale gas revolution” unlocking the U.S. energy advantage.

Some presenters mentioned the growing issue with marine debris and potential policy developments regarding plastics, but the eye opener was the fact that the risks discussed had to do with a potential “drawdown” in the demand for fossil resources – not because consumers may use less plastic, but because consumers will likely use more.

Plastics are essential in the path to fuel efficiency and the reduction of greenhouse gas (GHG) emissions, but they are also losing their social license with alarming amounts building up in the oceans, our bodies, and all other species on Earth. A solution to plastic waste is desperately needed immediately.

Addressing plastic waste along with the growing threats of climate change requires us to unlock the plastic paradox.

The notion of petrochemical companies worrying about upticks in use of plastics may seem puzzling until you understand the relationship between plastics use and fuel consumption, and what changes in that ratio means to oil and gas bottom lines.

Use of plastics results in lighter products, and in general that means less fuel demand. It’s true virgin plastics production does rely on oil and gas, but right now plastics consume only 4 percent of those fossil resources produced globally. Global oil and gas giants make their money primarily by delivering fuel to help the world get around.

That is all a clear sign that the use of plastics, if executed in a well-planned manner, can carry important environmental benefits. Surely, there is no better proof of plastic’s role in helping us move away from a dependence on cheap oil and gas than the fact that this very concept is a major topic of discussion (and concern) among petrochemical giants. 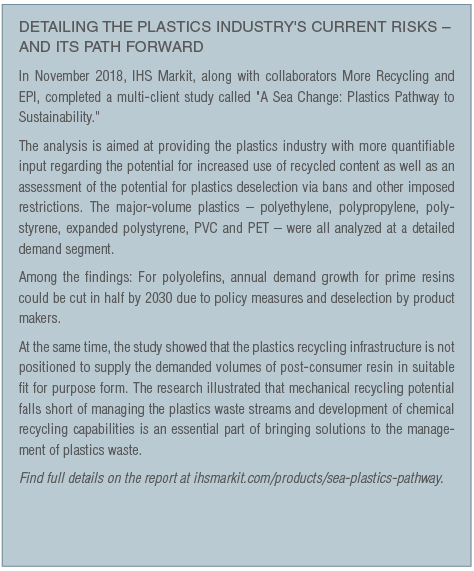 Currently, in Texas alone, natural gas is flared (or burned off) in amounts worth more than $1 million per day. This gas can be used in virgin plastics production, so it’s not surprising that resin makers are finding ways to expand production to generate value from the abundant gas production. Last fall, in fact, the International Energy Agency predicted plastics would drive half of global oil demand growth by 2050.

However, by simply ramping up production of virgin plastics production the plastic paradox won’t be unlocked. Though some carbon emissions benefits might be achieved through plastics-oriented product innovation, waste will remain an issue. And, the full potential on the carbon reduction side won’t be realized.

For progress to become a reality in those areas, the key will be finding real ways to achieve sustainable circularity.

Recycling and recovery as a means to progress?

China’s satiation for the world’s scrap plastic has exposed major gaps in the emerging circular economy. The United States sent roughly 30 percent of its scrap plastics in 2016 to export buyers, according to data tabulated by More Recycling. European countries (including those with extended producer responsibility) sent an even higher percentage.

Previous policies for resource management have been based on diversion of materials from landfill rather than efficiency in handling of materials throughout the value chain and end-market development.

With nearly 8 billion people on Earth, there is tremendous demand for resources. China’s demand for oil or plastics isn’t waning. In fact, China will likely exceed the U.S. in oil consumption in the next several years.

In the U.S., more than 1 billion pounds of plastic that were collected for recycling in 2016 are now likely destined for a landfill, due to insufficient collection, sorting, reclamation and conversion capacity, and demand for post-consumer resin. Without a major intervention in the marketplace, the amount of plastic waste will grow, or communities and businesses will select alternative materials and GHG emissions will rise. Plastics play an important role in fuel efficiency, but recycled plastic boosts energy savings even further – unlocking the plastic paradox.

Research indicates that moving away from plastics on a large scale will have negative environmental implications. As the chart below demonstrates, a 2016 study from the research firm Trucost found that the environmental cost of using plastics in consumer goods and packaging is nearly four times less than if plastics were replaced with alternative materials. (The analysis, conducted on behalf of the American Chemistry Council, was based on natural capital accounting methods, which measure and value environmental impacts – such as consumption of water and emissions to air, land and water – that are not typically factored into traditional financial accounting.)

Most everyone consumes fossil resources whether they realize it or not. One More Recycling staff person alone consumed more than 10 tons of CO2 last year flying to and from events to explore how we can reduce environmental impact – that’s a tragic irony.

The fashion industry’s global GHG emissions (5 percent) is roughly equivalent to the GHG impact from the entire aviation sector.

The United Nations Food and Agriculture Organization says 30 percent of food is wasted globally; food waste adds 8 percent of total global GHG emissions. We consume 10 percent of the U.S. energy budget just shipping food. Of course, we should all eat lower on the food chain with less meat, but for those who eat meat, plastic film packaging can extend the shelf life of a product from four days to 30 days, reducing significant waste. Unfortunately, these highly engineered film packages are not yet recoverable within our current system and will likely require chemical recycling for recovery.

With many long-standing goals focused on diversion (and more recent targets on reduced GHG emissions), one would think the magnifying glass would be on the mountains of paper and organic material that currently end up in landfills where they off-gas methane, a potent GHG. Materials recovery facilities (MRFs) are certainly more focused on their fiber stream than on plastics, given that fiber typically makes up around 70 percent of the material those facilities manage.

Currently, most of the pressure to address plastic waste is on the companies that sell products in packaging. In the era of social media, companies are at risk of losing their social license fast. 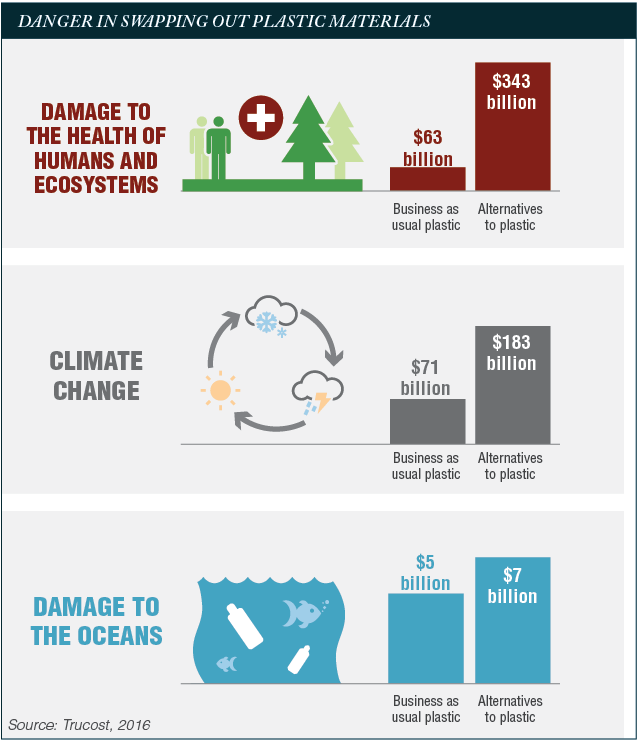 Issues can present and then become a growing virus for companies. Brand owners such as Procter & Gamble, Unilever, Johnson & Johnson, Colgate and Estée Lauder are stuck squarely in the plastic paradox. The science and consumer demand are driving smaller, lighter products and packaging to provide convenience, reduce fuel consumption, and lower GHG emissions. However, our resource management policies and infrastructure penalize products that become lighter, smaller and harder to recycle. Not to mention that our resource management structure is out of date and underfunded.

There are parallel issues growing. Most don’t directly see the impact to the climate due to our material choices. They don’t see ocean acidification, but people do see bags floating and straws choking wildlife. Without factoring in the true costs of our actions, we function in a marketplace that makes it easy to consume and generate waste, even in countries with EPR. Fortunately, EPR programs are evolving to incorporate life cycle impacts – the European Circular Economy Package is one clear example – but much more is needed.

Without policy in the U.S., segments of industry – including the plastics industry – have begun to measure action, both internally and externally. Sadly, this evolution is too slow, and for impact we need revolution – movement in leaps and bounds, rather than in increments.

Imbalances in the marketplace

Increased efficiencies in extraction, along with low-cost energy sources, lead to increased harvest, mining and extraction, which has a ripple effect on all commodities. The U.S. grew to the largest global producer of crude oil in 2018, supporting the U.S. economy and financial security. Tax incentives and subsidies enable the continued advantage of exporting fuel and plastics without factoring in external costs.

Externalized costs are those paid by society and the environment rather than the producer. A failure to incorporate the true cost of production into the products we consume leads to market malfunction. Because we fail to place value on scrap commodities for their environmental attributes and externalize the cost of production of virgin materials, recyclers struggle to compete with virgin resin producers.

We are in the midst of a massive transition on so many levels. The opportunity for the petrochemical industry to unlock the plastic paradox is ripe. Industry has the capital, research and development capabilities, and business acumen to unlock many of the necessary solutions.

In mid-January, some of the world’s largest plastic resin manufacturers, consumer product companies and others announced the Global Alliance to End Plastic Waste, which will devote at least $1 billion over five years to battle plastic pollution. That’s a positive step towards leveling the playing field.

Ultimately, we won’t move ourselves out of this cycle of generating waste until we put value on carbon. By doing so, companies would have increased incentive to more sustainably manage material use, leading to greater circularity.

We still need to keep our sector aligned with the four fundamentals of plastic recycling: a) large, clean supply of material, b) technology to convert the material, c) profitable end markets, and d) money to fund the system. What’s changed is the need to unlock the plastic paradox, moving us all toward taking radical actions to cut carbon emissions.

The first step will be tracking the carbon impact of material use and recognizing companies and organizations that are reducing climate and carbon impacts through smart material choices, such as use of post-consumer plastic resin.

The next step is advocating for policies at the national, state and local levels that create incentives for the circular economy, focusing on the economics. To start, we can reexamine subsidies and tax breaks on raw material extraction and production with a lens toward providing opportunities for all materials (virgin and recycled).

We can also explore a national “revenue-neutral” price on carbon to favor the most efficient methods of material use and reuse. In such a system, fees would be collected from entities that emit carbon, and that money would be returned to citizens as a dividend, either through direct rebates or tax cuts. This kind of effort would incentivize the engineering of plastics (and other materials) for optimal recycling and reuse.

Eyes on the (new) prize

In 1990, Daniel Yergin wrote a critically acclaimed history of the petroleum industry, a book called “The Prize: The Epic Quest for Oil, Money and Power.” As the plastic paradox takes hold, it’s becoming clear that for society and many business interests to advance, we need to stimulate action around a new prize: carbon reduction.

The prize lies buried in our ability to become more efficient and reduce waste overall, just as we see done in every other natural system on the planet.

Nina Bellucci Butler is the CEO of More Recycling, a research and technology firm with a mission to provide tools and services (including plasticsmarkets.org) to accelerate the transition to a society that manages resources sustainably. She can be contacted at [email protected]

Emily Tipaldo joined More as the director of strategy and business development in December 2018. She was previously the director of packaging at the American Chemistry Council. She can be contacted at [email protected]