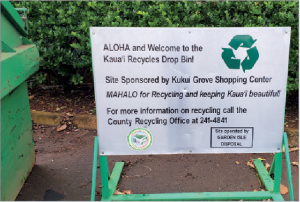 Kauai is known as the Garden Island, so named for its impressive array of green space. But the Hawaiian island’s “green” association is also visible in its robust recycling efforts.

Kauai County, which encompasses the entire island, began ramping up its recycling efforts in mid-2000, when the county hired its first recycling coordinator. In the years prior, there were drop-off options for a limited list of items, including motor oil and household hazardous waste.

“Programs began to take off, and there was support to hire additional staff and grow programs,” he said.

The county has notched a 42 percent diversion rate, thanks in part to a container deposit system and a source-separation drop-off system that limits contamination.

There are no materials recovery facilities on Kauai, which has a population of 75,000, so there are no curbside recycling options provided by the county. Instead, recycling is centered on a series of self-hauling services.

Lawmakers passed the state’s beverage container deposit law in 2005 (the deposit amount is 5 cents), and that “significantly raised awareness in the area of recycling,” Tabata said.

Other materials, including motor oil, white goods, tires and more, are accepted at local refuse transfer stations and the island’s landfill. End-of-life electronics collection occurs via drop-off at a local metal recycling facility, as well as at multiple monthly drop-off events.

A county-operated resource center provides household battery recycling for a variety of battery types. It also hosts a “swap and drop” style packaging exchange for bubble wrap and packing peanuts, and it provides free home compost bins for residents.

For outreach, the county offers technical assistance for businesses looking to increase recycling and waste diversion efforts. The county also gives presentations at schools and trade associations, distributes a “recycling guide” to residents, and maintains a recycling hotline.

In the years since the deposit program was enacted, several additional pieces of legislation and local ordinances have been passed and have “made a tremendous impact on recycling” in Kauai, Tabata said.

In 2010, restrictions went into effect on sending commercially generated cardboard, green waste and metal to the landfill. Instead, these materials must be diverted through recycling options. 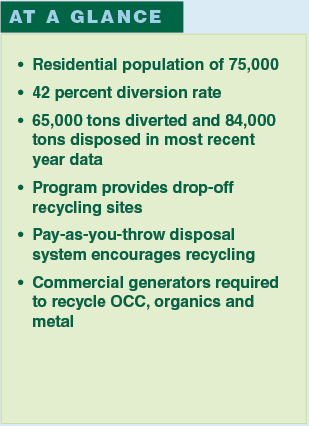 Single-use plastic took center stage in 2011, when a Kauai ordinance limited the types of plastic bags that could be distributed on the island. Retailers can only provide recyclable paper bags or reusable bags, in an effort to reduce litter, prevent marine pollution and save landfill space.

In 2015, Kauai switched to a pay-as-you-throw garbage collection system, in which residents are billed different amounts based on the size of garbage cart they select. This is commonly implemented in communities as a way to incentivize recycling through financial savings. Kauai is the only county in the state of Hawaii to use pay-as-you-throw, and the county is also in a relatively rare position in the wider recycling industry: It uses pay-as-you-throw but does not have a curbside recycling option.

Kauai is now gearing up to look at the future. The county has new leadership and is working to develop long-term goals. Part of that will be an integrated solid waste management planning update, Tabata said.

Recycling in an island setting presents several considerations and challenges that mainland programs with more transportation options might not face.

Many mainland recycling programs are also without nearby MRFs, but they can collect materials, combine them with other nearby communities’ recyclables and put together a large enough load to make it economically feasible to haul to a MRF.

But on an island, such hub-and-spoke frameworks are not feasible.

“We have a very small residential population, so the amount of recyclables available are low,” Tabata said. “We are geographically isolated, so we cannot pool materials across municipalities.”

A high cost of doing business presents an additional challenge for the economics of recycling on the island, Tabata added.

“However, residents, businesses and visitors have a deep appreciation for the beauty of the island, and are very motivated to do their part to keep the island clean and green,” Tabata said.

Tabata noted there are different costs associated with different diversion programs run by the county. For example, hazardous waste collection has a high cost, and even drop-off recycling locations pencil out to cost more than landfilling those materials.

But organics diversion is relatively inexpensive, Tabata said, lower than the cost of landfilling for that stream. The county promotes a backyard composting option for residents, and it works out to be the least expensive program because there is no material hauling involved.