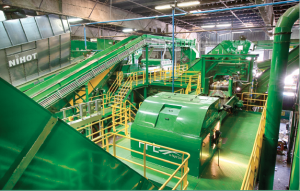 GreenWaste Recovery, located in the heart of Silicon Valley, has been known in the industry for its use of advanced technologies to recover materials. That company characteristic was recently bolstered by GreenWaste’s move to bring on another innovation: automated sorters with artificial intelligence.

The 52,000-square-foot GreenWaste Recovery facility in San Jose is substantial in size and capabilities. It contains two processing lines that sort recyclables from municipal solid waste (MSW). Those lines originally opened in July 2008.

A previous subject of the “MRF of the Month” feature, the GreenWaste MRF is being highlighted again because of substantial retrofits announced this summer.

The improvements, commissioned in July, more than doubled the MSW system’s combined throughput, from 35-40 tons per hour to 90 tons per hour. 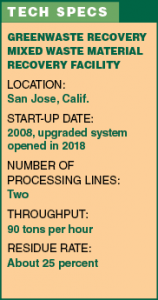 The company also incorporated the Total Intelligence Platform, a new product that provides information on every motor in the facility as well as detailed data on the composition of the recyclables stream passing under sort stations.

It is using the artificial intelligence machinery for a variety of quality-control functions. Four of the “arms” on the Max-AI AQC units work in tandem with NRT optical sorters to clean up the container mix. Another unit, ACQ-2, which includes dual arms, captures containers on the “last chance belt.”

An artificial intelligence machine also separates PET containers that are not included in California’s container redemption program from those that are, ensuring the company only redeems deposits on applicable bottles and cans.

The system processes both multi-family and single-family loads, recovering a variety of materials for recycling and organics for composting.

About half of the MSW received at the GreenWaste MSW processing facility is recovered as commodities or pulled out as residue, and the remaining compostable fraction contains up to 80 percent organic materials. GreenWaste partners with sister company Zanker Road Resource Management, which owns Z-Best Composting in Gilroy, Calif. These two facilities can achieve a combined diversion rate of up to 75 percent.

The facility employs 30 people (including sorters, scale operators, spotters, mechanics, supervisors, equipment operators and others). They work on one shift, Monday through Friday.