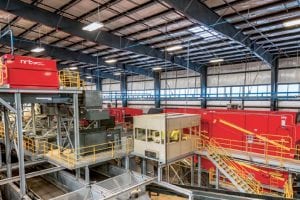 Today, Penn Waste’s MRF in central Pennsylvania is a very different facility than it was three short years ago (or maybe they were long years, given the challenges the industry has seen of late).

The 96,000-square-foot facility last September added optical sorters and one of the country’s first recyclables-sorting robots. Resource Recycling first featured the facility in “MRF of the Month” in December 2015, but we’re taking another look now, given the advancements the facility has undergone.

“We recognized about a year-and-a-half ago that the composition has changed significantly. Containers were taking a larger portion of the composition,” said Tim Horkay, the company’s director of recycling operations. “We had to come up with a solution with our partner, BHS, to allow us to respond to the evolving ton, not only now but in five years from now.”

Originally developed and equipped for about $20 million, the MRF underwent its latest upgrade last year, when it installed additional equipment from Bulk Handling Systems (BHS).

An NRT SpydIR optical sorter removes small cardboard boxes at the beginning of the container line, addressing the reality of more boxes in the stream due to the rise of e-commerce. Sometimes, optical sorters looking for fiber will eject a container with a fiber label. To avoid this, NRT SpydIR uses the Max-AI visioning technology, which can differentiate a container with a fiber label from standalone fiber based on visual characteristics.

Meanwhile, the plant’s HDPE sorter was replaced by a larger NRT SpydIR model.

And the third new optical sorter, a NRT ColorPlus, sorts HDPE by color. The previously installed HDPE sorter was moved to the end of the container line, where it was combined with an integrated MetalDirector, allowing it to recover the last few plastic and metal containers that had been missed.

The retrofit also included a Max-AI Autonomous Quality Control unit, a robot that uses artificial intelligence to recognize and remove contaminants from the PET stream. It can perform roughly 65 picks per minute, according to Penn Waste and BHS.

Additionally, a new eddy current separator was installed to increase recovery of UBCs, and a Nihot SDS 800i drum separator was put in to clean up the glass output.

The retrofit boosted total throughput capacity from 35 tons per hour to 45 tons per hour and boosted product qualify. And operating costs per ton of material decreased 30 percent since the retrofit.

“We continue to invest in technology to boost throughput, recovery and purity,” Amanda Davidson, Penn Waste’s director of marketing, said in a release. “The complete retrofit took only nine days. The results have led us to continue to expand our reach in what have become turbulent market conditions.”

Components of the prior system that were retained post-retrofit include the Metering Bin, OCC screen, Debris Roll Screen, two ONP screens, Polishing Screen, magnet and three optical sorters. The MRF also kept one of its American

Baler balers but replaced the other with a Bollegraaf HBC 140S.

The MRF takes in recyclables generated by about 180,000 households and 4,000 businesses, in addition to other third-party public and private generators. Penn Waste, a locally owned company, operates a fleet of 125 collection trucks.