Contamination in focus: Engaging in the daily battle

As a city, Albuquerque, N.M. is dedicated to recycling and has enjoyed a growing rate of participation since 2013, when the city rolled out curbside recycling carts and single-stream recycling to every household. However, primary outreach efforts moving forward are focused on reducing contamination and emphasizing quality.

As curbside recycling became more convenient, residents put everything they think could – or should – be recycled into the carts. The city’s curbside tonnage has more than doubled since automated single-stream pick-up began in 2013, but the contamination rate has also risen: from 12 to 21 percent.

That’s forced Albuquerque, like many other cities and towns of all sizes, to engage in a daily battle with contamination in the recycle stream.

To understand how Albuquerque has found itself with major contamination concerns, it’s helpful to look at how the program itself has grown.

The city entered into a public-private partnership with Friedman Recycling in 2010 to bolster local recycling efforts. Friedman agreed to receive, process, market and transport recyclable materials collected by the city with no anticipated ratepayer impact on the residential side. Of equal importance, Friedman agreed to build a multi-million dollar single-stream materials recovery facility at the company’s own expense, increasing the capacity for recycling in Albuquerque and New Mexico as a whole. Albuquerque’s only recycling avenue prior to the partnership with Friedman was the city-owned and operated MRF, built in the early 1990s, and over the years Albuquerque far outgrew the facility.

The city’s financial arrangement with Friedman was based on several variables. The MRF operator charges a processing fee and/or shares revenue from the sale of materials, depending on the tonnage delivered and market pricing. The partnership with Friedman also provided the community the opportunity to recycle more materials including cereal/cracker boxes, phone books, milk cartons/juice boxes, plastics Nos. 3-7, rigid plastics, small e-waste, pots and pans, small metal appliances, and books.

The ultimate goal of the city’s contract with Friedman was to have the city benefit from the profit-sharing mechanisms of the contract. However, with the recent changes in market conditions in China, the city and Friedman are renegotiating a temporary change.

As mentioned above, Albuquerque’s residential program began seeing more and more improper material in the curbside stream as the single-stream program progressed. Today, the most prevalent contaminants are green waste, construction debris, wrappables (including plastic bags) and expanded polystyrene products. Glass is not accepted for recycling at the curb, but there are multiple locations for recycling at drop-off sites around the city.

The primary factors causing contamination in Albuquerque are the following:

The department has also developed and implemented a system to capture data and inform citizens of problem items in the cart. The current process looks something like this: The driver of a collection vehicle calls dispatch, states the type of contamination and leaves a hang tag. Dispatch then logs the location and type in a database and mails out a “first-occurrence” letter to the resident. Each day, dispatch staff generate a contamination address list for that date.

If a second occurrence is noted at a certain household, a code inspector visits the site and attempts to engage the resident (door hangers are left). When a third occurrence is logged, the household’s cart is removed.

From July 2016 to Dec 2016, the department sent out 882 first-occurrence letters to residents, 138 second-occurrence notices with site visits, and 35 third-occurrence notices with cart removal. The city has approximately 174,000 residential households, so the above data shows only .005 percent of households were affected. A review of the data for like months in 2017 shows an improvement in compliance after the first letter between 1 and 3 percent. 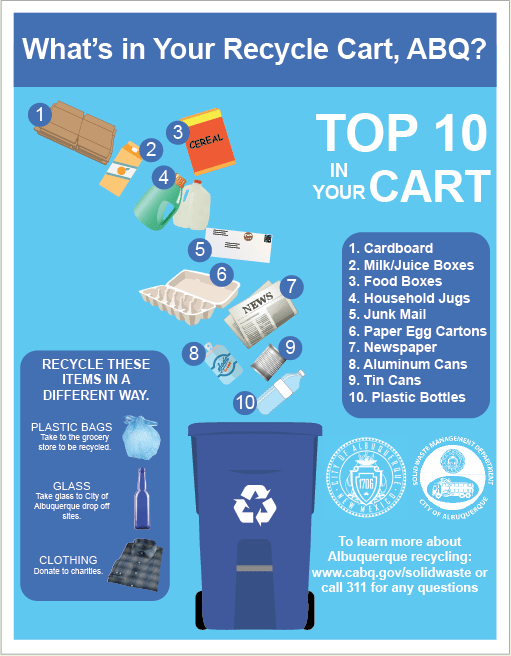 Albuquerque’s solid waste department has used a variety of outreach tools to try to educate residents about what should and should not go in curbside recycling.

Adding technology to the fold

Late in 2016, the city began phasing in Fleetmind, a dispatch software program that will allow real time capture of information (including photos) pertaining to the contamination problem. The program will automatically match addresses to service points, asset identification, proof of service and set-out rates.

When fully implemented, the automated process will greatly assist in efforts to reduce recycling contamination.

In the automated process, a driver logs the issue via an on-board computer, with RFID on the affected cart notifying the driver of the service address. The driver’s entry automatically notifies dispatch to send a letter and add notes to a database.

The technology allows for a quicker, better picture of the contamination type, location and volume, and it also makes it easier for city staff to be aware of repeat contaminators. In addition, it adds efficiency to outreach: With information from the automated process, for instance, social media can be used to target certain locations with specific messaging.

At the same time, however, the city is continuing to rely on tried and true resident engagement initiatives – namely, getting out in front of residents. In fiscal year 2017, the department gave 48 presentations in classrooms to more than 2,050 students, gave over 250 tours of the Friedman MRF, participated in events throughout the city with over 2,000 participants, and gave neighborhood association presentations to over 400 people. 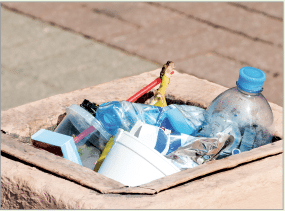 Albuquerque’s contamination rate has grown from 12 to 21 percent since 2013.

Partnerships in the local community have assisted city staff in communicating with the community. For example, the department recently partnered with Keep Albuquerque Beautiful, Locker 505 (a local clothing bank), Hinkle Family Fun Center, iHeartMEDIA, Donut Mart and O’Niell’s restaurant to sponsor the seventh-annual Recyclothes event. Every year, thousands of students in the greater Albuquerque area and their families go without basic necessities. Recyclothes is a clothing drive that directly benefits those students. Events like this give the marketing team a great opportunity to engage the public and provide assistance to some of the region’s neediest families.

Still, the department believes there is more to be done in educational outreach, and staffers are exploring other social media platforms, such as Hootsuite, to strategically schedule social media postings at specific times for better audience engagement. The department is also working with media partners to target specific ZIP codes and audiences with recycling messaging. In addition to digital communication, it is vital within the community to ensure all educational efforts, programs and handouts are be available in several of the dominant languages in the area.

Finally, early in 2016, the department partnered with Recycle Coach, a smartphone app that connects residents to waste and recycling information. It also serves as an education platform that blends proven principles of learning and modern teaching methods to address the fact that materials are too often put in the wrong receptacle. This application has proved to be extremely helpful to both the city and citizens.

In the years to come, the department plans to double communication efforts using a smart matrixed approach to public outreach.

With the changing offshore markets and reduced locations for various recycle streams, it is important to understand your community contamination rate, the major contaminants in your stream and the best ways to target educational efforts in these areas.

The Solid Waste Management Department in Albuquerque is continually improving the quality of educational communication with the public, helping the community to better understand the issues facing recycling and how they can help solve problems with material quality.

The city of Albuquerque approaches today’s challenging market reality as an opportunity to focus on quality and continue local efforts toward creating a healthier community. To do this, it’s critical that leaders of municipal programs stay in close conversation with their communities and MRFs. They must also remain informed about end markets to understand exactly which materials are contaminating the recycling stream.

Lise Gorgone was until recently the administrative services manager for Albuquerque’s Solid Waste Management Department. She retired from the department in April. To learn more about Albuquerque’s program, contact Jill Holbert at [email protected].