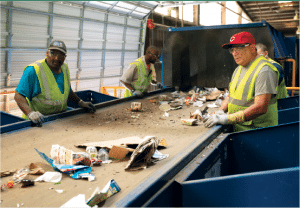 During their regular schedule, employees of the MRF near High Point, N.C. work on one shift during daylight hours, sorting and baling residential recyclables.

But two times a year, they put on another pot of coffee and pull all-nighters. That’s because they need to sort material generated by the twice-annual High Point Market, the world’s largest furnishings trade show.

The event, which brings to town 75,000 attendees and 2,000-plus exhibitors, generates an additional 1,000 tons of recyclables. The MRF must operate for 24 hours a day, seven days a week, for four weeks a year to handle the influx, explained Melanie Bruton, MRF superintendent.

The City of High Point owns and operates the 57,500-square-foot facility, making it the only city-owned and -operated MRF in North Carolina. The single-stream sorting system is located along a forested drive outside of Jamestown, a small suburb of High Point and Greensboro.

The MRF takes in the recycling stream – about three-quarters of which is fiber – from nearly 32,000 households. It also receives some single-stream commercial material. “We are hoping to be able to up our annual tonnage of commercial recycling once we are more familiar with this system,” Bruton said. “We are definitely leaving the doors open for growth.”

Originally opened in 1991 as a mixed-waste processing facility, the MRF was transitioned to a single-stream system in 1996. A new sorting system manufactured and installed by Machinex became operational in January 2018 (incidentally, Machinex’s U.S. corporate headquarters is located in High Point). The new system is capable of sorting 10 tons per hour. Bruton said it offers 15 different “recipes,” or programs for running material. 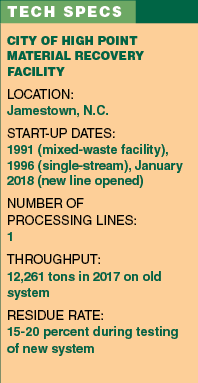 According to a press release from Machinex, it sports a MACH Double-Deck OCC screen, which reduces wrapping and improves cardboard recovery. A ferrous magnet and eddy current separator were installed at the end of the container line.

And, instead of a traditional disc screen, a MACH ballistic separator was installed to separate fibers from containers. “On the equipment side, we are particularly happy with the ballistic separator because there are no rubber disks that wear and it reduces our operational downtime for maintenance,” Bruton said.

Still, the MRF, like others around the country, finds certain contaminants, including wrappables, to be a headache. Bruton said the biggest issue the facility faces is dealing with plastic bags, medical and biological waste, needles, yard debris and garden hoses.

During testing of the new system, the residue rate was between 15 percent and 20 percent, but Bruton expects that number to come down as staff adapts to the new system.