Community Spotlight: A city where recycling economics are ‘what’s keeping us alive’ 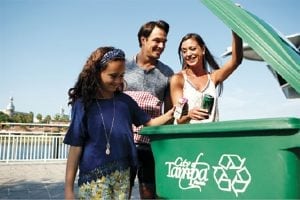 Just look at Tampa, Fla. The city has a revenue-sharing agreement with materials recovery facility (MRF) operator Waste Management. But right now, the value for the city is not the money that comes back from marketed material – it’s what gets saved by not having to send more to disposal.

About 20,000 tons of recyclables are collected by city crews through the residential curbside program each year. At the same time, Tampa collects 310,000 tons of waste that’s sent to a waste-to-energy incinerator.

A local official pointed out that if the recycling program was absent, the waste-to-energy facility would be pushed beyond capacity, and the city would likely need to explore additional disposal avenues sooner rather than later.

Tampa’s population is also booming, which adds to the economic pressure.

“I always like to say we’re past the point of no return,” said Mark Wilfalk, director of the city’s Department of Solid Waste and Environmental Program Management. “We’re to the point where, although we don’t get a high dollar return, the value of having that diversion program in place is what’s keeping us alive.”

Tampa’s recycling program has its roots in a subscription-based program that operated during the 1990s – residents could receive a curbside cart on request. Residents were asked to source-separate a number of material types, and the program was geared toward specific neighborhoods.

Around 2000, the city rolled out curbside recycling to the entire city. And about a year after that citywide implementation, Tampa switched to a dual-stream system in which fiber was kept separate but everything else was commingled. 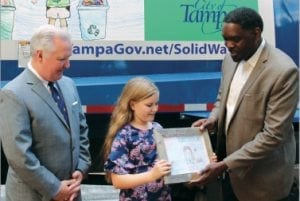 Determining a diversion rate for the city is not straightforward. Using the figures noted earlier – 20,000 tons sent to recycling and 310,000 tons sent to the waste-to-energy site – would mean a recovery rate of around 6 percent.

But Wilfalk said those numbers don’t account for all the city’s waste and recycling tonnages.

And the issue is compounded by the fact that Florida regulations allow waste-to-energy weights to be counted toward diversion.

Wilfalk reiterated that the true mark of success for the Tampa program is whether it can keep the city’s waste output at a level that does not require additional disposal options.

“It’s an expensive program,” he acknowledged. “But it would be a lot more expensive if we didn’t have it in place.”

Currently, the program accepts standard single-stream commingled recyclables, including glass, although that material presents challenges for the program. There are few local markets for glass, and it often ends up requiring a cost to dispose, rather than bringing in any commodity value.

“It’s a little difficult for us, but we’ll weather the storm until hopefully the markets change,” Wilfalk said.

Program leaders have learned to account for Florida’s weather patterns when determining material quality. One year, for example, the contamination study was completed after a stretch of 21 days of solid rain, Wilfalk recalled, and the rate was abnormally high.

To try to continue to move the ball forward on program efficiency and material quality, Tampa gets help through an agreement with Waste Management. Under the contract between processor and city, Tampa receives a $60,000 per year endowment fund, money that’s dedicated to educating the public.

“It works for both sides because it educates our customers and they end up getting a cleaner product at the facilities,” Wilfalk said.

Each month, Tampa receives a $5,000 check from Waste Management, which the city uses to promote recycling in a variety of ways, including creating advertisements, putting up billboards and more.

Tampa is also looking to increase its recycling efforts in two areas that pose challenges to communities nationwide: commercial and multi-family recycling.

Although the city handles all residential collection, commercial “is more of an open market,” Wilfalk explained, which means it’s a harder stream to tackle in a unified manner. The city also doesn’t have a requirement for recycling receptacle space to be provided with new buildings, and most developments have included only garbage enclosures.

But Wilfalk said planners are making progress by laying out the economic equation to property owners, a strategy that makes sense in a city where recycling is valued for its cost-cutting characteristics.

“The reluctancy is there, but that’s until you get [building owners] to realize the benefits of it,” he said. “So if they’re paying $200 for two eight-yard dumpsters to be serviced each month, and we can put a recycling program in there for $75 a month, that’s their savings.”