Materials for a masterpiece

In the recycling industry, we’re well accustomed to thinking of the economic value of recovered material. But an expanding program from one hauler and materials processor shows the role discards can also play in the realm of art.

The Recology San Francisco Artist in Residence (AIR) Program was founded in 1990 with the intention of educating the public about sustainability and resource conservation while supporting Bay Area artists. Over the last 28 years, more than 175 professional and college-student artists have had residencies, making art from the things San Franciscans have thrown away. The program has evolved to include a permanent art collection, off-site exhibitions, a 3-acre sculpture garden, an environmental learning center, and tours for more than 4,000 children and adults each year.

The Recology AIR effort is now a vital part of the San Francisco Bay Area art and environmental communities. Over the last eight years, Recology has worked with communities in Seattle, Portland and Astoria, Ore. to establish similar residency programs. It is the company’s hope that someday every community will have a resident artist creating artwork from the things people throw away, teaching important lessons of sustainability to help preserve our fragile planet.

Rolled out alongside curbside service

The Recology San Francisco AIR Program was conceived by artist and activist Jo Hanson, who in the 1970s began a practice of sweeping in front of her San Francisco home and gathering found materials into books that reflected daily life in the community. Hanson also organized city-wide street sweeping campaigns and tours of illegal dumping sites, and ultimately, an exhibition at San Francisco City Hall.

When her work came to the attention of city officials, she was invited to Recology San Francisco to see where the things she had been sweeping up were going. There, she saw a wealth of materials, and recognizing their value to artists, proposed the residency program.

Hanson’s idea coincided with the establishment of curbside recycling in San Francisco, which resulted from a 1989 state law. The legislation required all California jurisdictions to divert at least 50 percent of their waste from landfills by the year 2000. In San Francisco, city government worked with Recology to inspire citizens to use curbside recycling bins by teaching them how recycling helps protect the environment. The Recology AIR program was the most innovative part of an intensive education plan and the first program of its kind in the country.

It continues to engage the local population. Each year, six professional artists and three college-student artists spend four months working on-site in studios at Recology San Francisco. Artists receive safety gear and training, and are given a cart to go “shopping” for materials in the Public Reuse and Recycling Area, better known as the public dump.

During their residencies, artists make work for a final public exhibition, and speak to tour groups about their art and residency experiences. Typically, more than 120 local artists apply each year for the six professional residency slots. Residency recipients are chosen by an advisory board of arts and environmental professionals and former Recology artists-in-residence. Artists receive a stipend, administrative support, access to tools and a postcard and promotion for their final exhibition. At the conclusion of their residencies, artists give three pieces to the company’s permanent art collection, and these pieces are shown in off-site exhibitions that promote recycling and reuse.

The off-site exhibitions have had profound effects. Perhaps most notable was the San Francisco International Airport’s 2013 exhibition “The Art of Recology: The Artist in Residence Program 1990-2013,” which took place in the airport’s United Terminal and presented over 100 pieces made by 45 artists. It was seen by more than 2.5 million people.

Between the on-site tours, various exhibitions and end-of-residency receptions, the program also provides environmental education for thousands of adults and children each year. Talking with the artists or seeing what can be created from “trash” can greatly impact how visitors think about their own consumption practices. 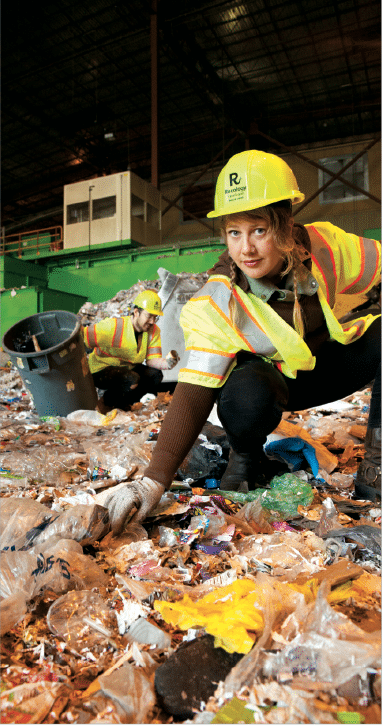 One remarkable aspect of the program is that although all artists scavenge from the same pile, each person responds differently to what they find.

For instance, in 2007 Nathaniel Stookey composed “Junkestra,” a symphony using entirely found-object instruments. It has been performed by the San Francisco Symphony, has been released on the Innova classical music label, and in March 2018 was performed at the Kennedy Center for the

Another artist, Ma Li, in 2015 spent her residency creating costumes, props and sets for a magical performance inspired by a Chinese legend that engaged the community and spoke to human connectiveness. The first part of the performance occurred at Recology San Francisco, and the second part took place at the San Francisco Asian Art Museum.

Internet artist Jenny Odell created the “Bureau of Suspended Objects” during her 2015 residency. She diligently researched and recorded information about each object she scavenged and provided scannable QR codes that would bring up the details on viewers’ mobile devices. Odell’s project, which still lives online, demonstrates that even the cheapest disposable items have a complex history, and it sheds light on the resources, time and energy used in their production and consumption.

Finally, during his 2016 Recology residency, Ramekon O’Arwisters worked with shards of broken dishware and pottery to make visual representations of disconnection and fracture. While his work acts as a metaphor for personal and societal rupture, it also serves as a strategy for repair: He sanded the sharp edges on some of the broken pieces and gave them away to the public as reminders to soften our own sharp edges.

The Recology Seattle Artist in Residence Program launched in 2015 as a natural extension of the San Francisco program. The vibrant art community in Seattle and surrounding King County has embraced this opportunity to pair environmental concerns with artistic expression.

The Seattle initiative selects two local artists each year to spend five months at the company’s recycling facility. And in Seattle, the artists have access to streams of material beyond the curbside stream. Recology has developed a partnership with the City of Seattle’s North Transfer Station. Artists visit the site various times throughout their residency and can get their hands on scrap metal, wood, yard debris and more.

Additionally, artists are given the opportunity to gather material from Recology’s four retail store locations, which serve as community-focused recycling collection centers for items like lightbulbs, household batteries, bicycles, electronics, small appliances, latex paint and a variety of other materials that fall outside of the scope of curbside collection.

Using these materials, King County artists are encouraged to think conceptually about the issues facing both local and global environments. They then share their experiences with hundreds of students, industry professionals and municipal partners through tours of the Recology recycling facility. The artists’ participation in these facility tours provides a platform for conversation about consumption, sustainability, reuse and recycling.

Though the Recology Seattle program is still relatively new, there have been several notable projects. Dakota Gearhart’s 2016 show, “Fly Traps,” playfully re-created Recology’s complex processing facility, highlighting society’s paradoxical relationship with these unseen machines. Her work used video, photography and installation to examine the environment and explore how it is perceived through technology and mythology.

Meanwhile, Alexander Keyes’ “Jury-Rigged” show in 2016 investigated the relationship between finely crafted art objects and the work space by which they are supported.

Last year saw Meg Hartwig’s installation, “Refuse I,” which featured a ballpoint pen drawing of a pillar of refuse crafted from scavenged material. The work explored the meaning of “value,” investigating both personal and professional implications. Also in 2017 was a show from Max Cleary that included a collection of works of visual fiction, wherein he created hypothetical scenarios and then acted them out through his artistic practice. His use of photography, video and sculpture embodies a more conceptual approach to use of scavenged materials.

When the Seattle artists end their residencies, Recology showcases the artwork as part of the Pioneer Square neighborhood’s First Thursday Art Walk event. Artwork from prior years has also been showcased in local galleries, including 4Culture, King County’s cultural funding agency.

The program continues to grow in new and exciting ways, providing a creative outlet for discourse on how we define waste. 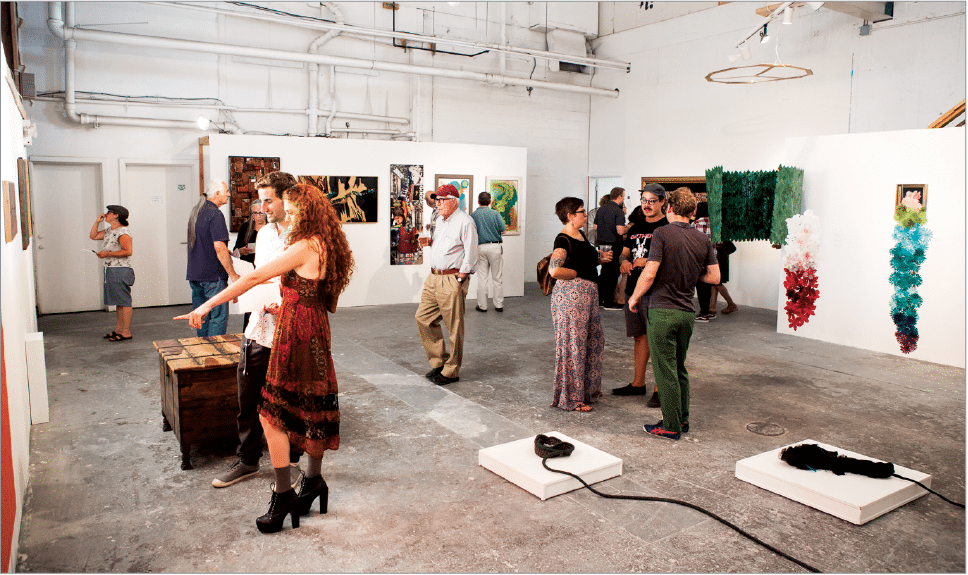 In the GLEAN program in Portland, Ore., five artists are given access to a local transfer station to scavenge material that serves as the basis of their work. The effort culminates with a formal exhibition.

The artist-in-resident effort has extended into Oregon as well.

GLEAN is a juried art program that taps into the creativity of artists to inspire people to think about their consumption habits, the waste they generate and the resources they throw away. Launched in 2010, GLEAN is a partnership between Recology Portland; Metro, the regional government that manages the Portland area’s garbage and recycling system; and Crackedpots, an environmental nonprofit arts organization.

Every year, five local artists chosen by a jury of arts and environmental professionals are given access to the Metro Central transfer station for five months to glean discarded materials to make art. The program culminates with an exhibition of their works in the summer at a local gallery.

The newest addition to the program family is the Coastal Oregon Artist Residency (COAR), a partnership between Recology Western Oregon and Astoria Visual Arts (AVA), located in the city of Astoria on Oregon’s northwest coast.

Launched in 2016, COAR aims to support the creation of art from recycled, repurposed and discarded materials recovered from the Recology Astoria Recycling Depot and Transfer Station. The three-month program hosts two local artists at a studio space in Recology’s recycling center.

At the conclusion of the individual residencies, Recology Western Oregon and AVA host a reception and public exhibition for the artists, featuring work made during their residencies. Upon completion of the program, each artist contributes one piece to the program’s permanent collection.

Artists and communities touched by experience

While many artists come to the Recology AIR programs with a practice of environmental engagement, everyone leaves activated in some way by their residency experience. It is virtually impossible to scavenge for months in the pubic dump and not be impacted by the enormity of what is thrown away.

Whether more vigilant recyclers or anti-plastic converts, or simply people making more conscious choices in the materials they use in their own artwork, artists feel the impact of their time working with discarded materials.